Carl Linnaeus was a Swedish botanist who lived almost 300 years ago. (You can read more about Linnaeus and contributions here.) Carl decided that the classification system of plants at the time was not very well thought out. So he came up with his own way of sorting and grouping plants and animals. We still use his system today. It’s called the Linnaean classification system, or Linnaean taxonomy. This classification system science lesson has an overview and worksheets to help kids 9-12 learn how to classify animals. 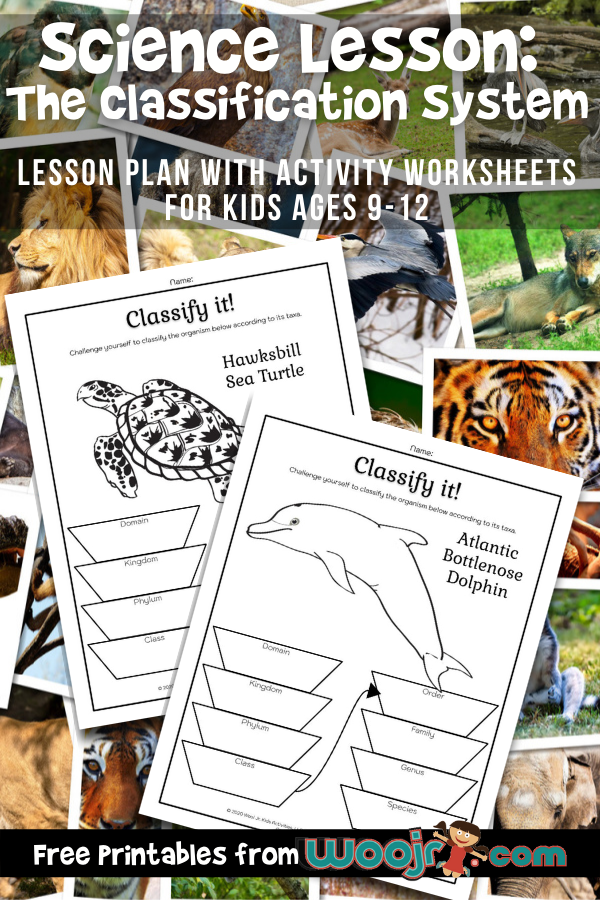 A classification system is a way to group animals that have similar traits. A trait is a distinguishing quality or characteristic, typically one belonging to a specific type of animal. For example, all elephants have trunks. This is a trait that is unique to these animals. 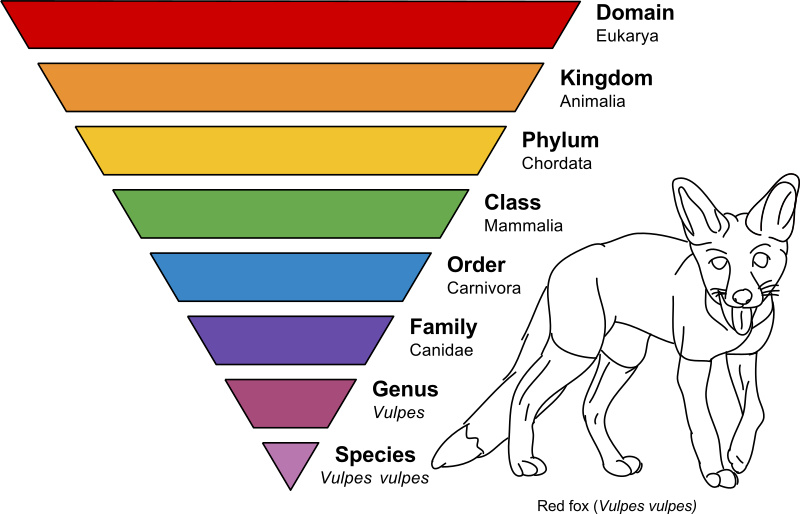 Taxonomy is the orderly classification of plants and animals based on their shared natural relationships. There are eight groups found in the Linnaean classification system. Together they are called taxa, but alone, each one is called a taxon. Here they are in order from biggest to smallest:

Domain is the largest taxon at the top and it covers all life forms. As you move down through the levels, different organisms are left out leaving only those that fit in that particular taxon.

Domain is the highest level taxon. Sometimes called a superkingdom or empire, the domains are very broad and encompass all life. There are three total domains: Bacteria, Archaea, and Eukarya.

Bacteria are single-celled organisms and microscopic. You cannot see them with the human eye. They are unique because they DON’T have a nucleus or any other membrane-bound organelles. Instead they simply have strands of DNA inside them. Bacteria are also very diverse and they are found EVERYWHERE!

Most people are scared of bacteria because some of them are pathogenic. This means that they can cause disease. But the truth is that most bacteria are beneficial to us. For example, beneficial bacteria live in your stomach and help you digest your food. Other types live in the soil and convert nitrogen.

Archaea are also unicellular. They are very similar to bacteria, but they tend to love extreme living conditions. They’ve adapted to thrive in environments where other life is unlikely to exist such as the ones that live inside the hot springs at Yellowstone National Park.

Eukarya can be single-celled or multicellular and they have a nucleus and organelles. This domain is made up of animals, plants, fungi, and protists. It’s pretty broad and contains both microscopic organisms and those you can see when your eyes. 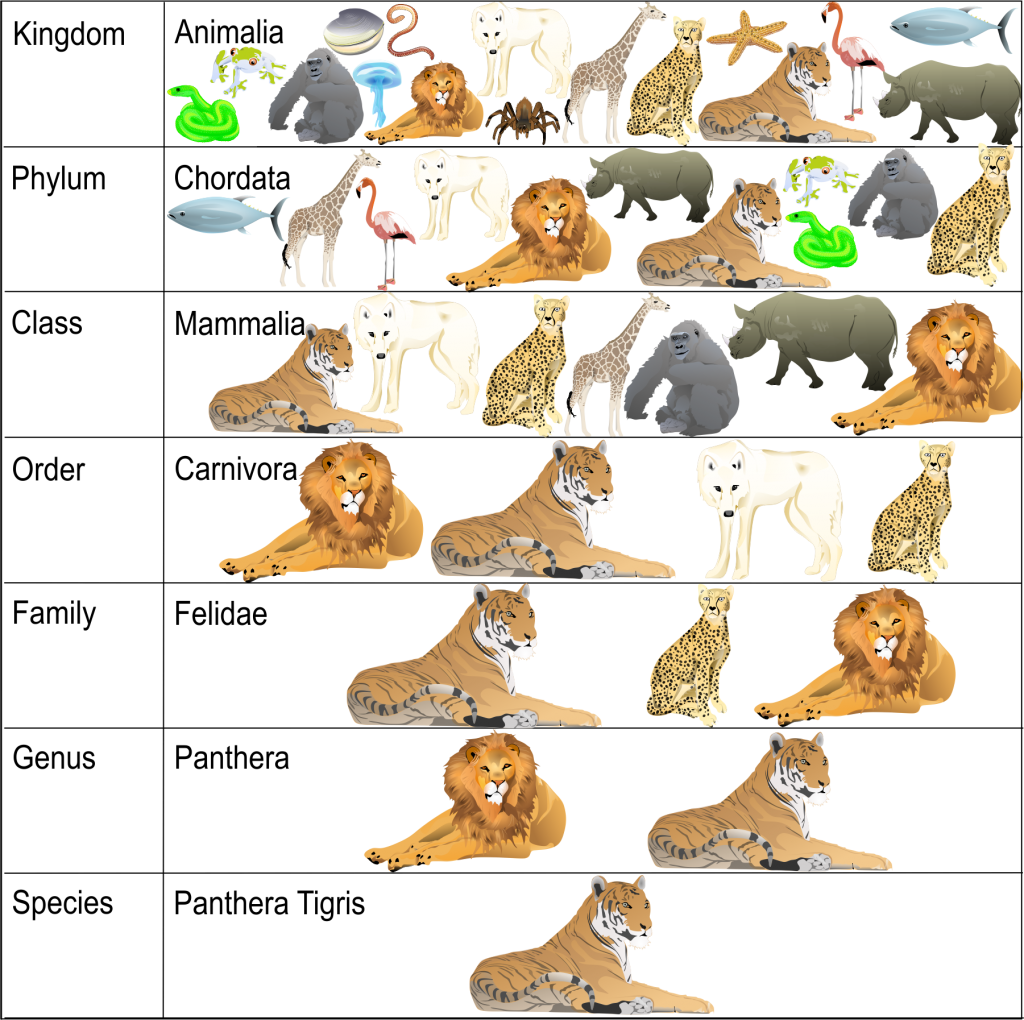 The Kingdom level is controversial. It changes a lot as new information is revealed. But typically, this level contains the following groups:

The next level is Phylum. It’s still pretty broad. One example would be Chordata (vertebrates), or animals with a backbone. Like the other levels, this one is always subject to change. But there are around 35 animal phyla, 14 plant phyla, and 8 fungi phyla.

There are more than 100 classes of animals, but the best-known ones are mammals, birds, reptiles, amphibians, and fish. (You might notice that these are all from the phylum Chordata).

The next two levels simply become more specific. One example of an Order is Carnivora, which is Latin for carnivores. Under this, you’ll find the following Families: Felidae (cats), Ursidae (bears), Canidae (dogs), and Odobenidae (walruses) just to name a few.

The final two levels are the ones with which most people are at least familiar. The Genus and Species make up the scientific name of every living thing. Species is the smallest and final level. The scientific name (Latin name) for the maned wolf, for example, is Chrysocyon brachyurus. Chrysocyon is the Genus and brachyurus is the Species. Together, they make up the Latin name and it is always typed in italics or underlined if it is handwritten. 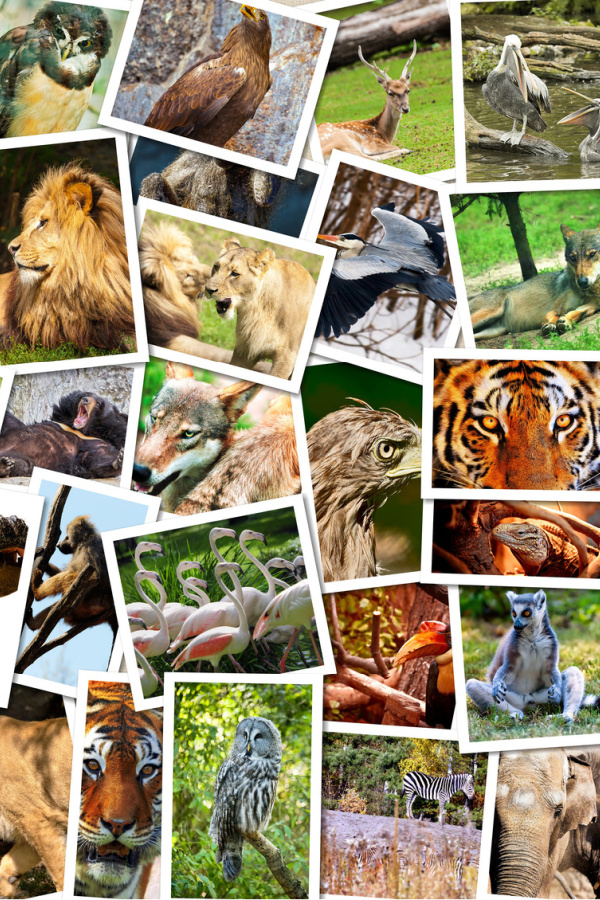 Here are some of our printable resources for challenging your children to learn about taxonomy.

Activity:
Print the following Classification pages and have your children use books or the internet to fill in the taxa for each animal. We recommend the following websites for finding this information: 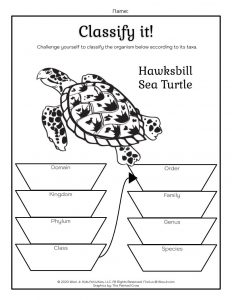 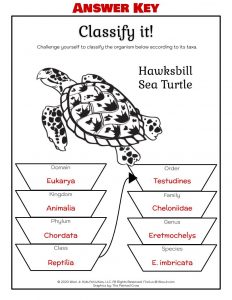 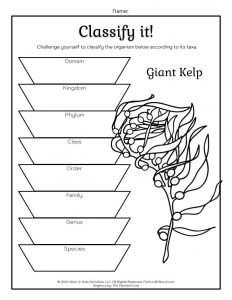 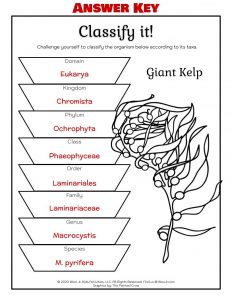 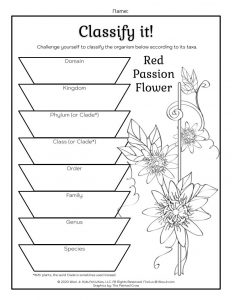 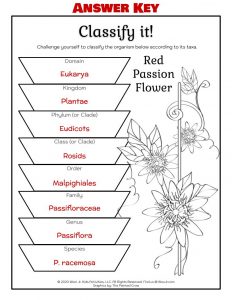 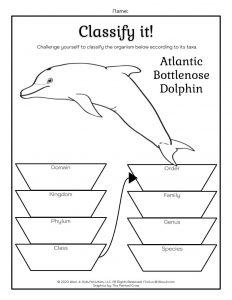 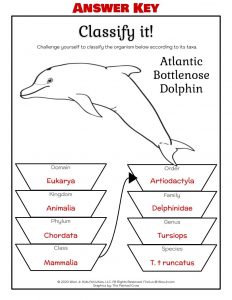 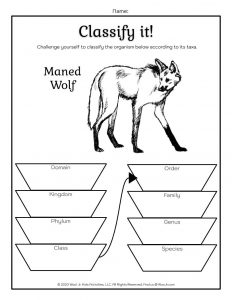 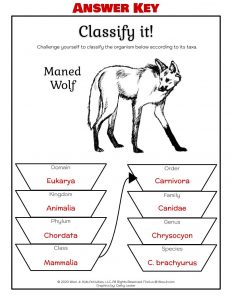 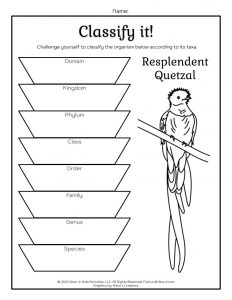 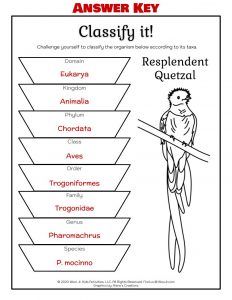 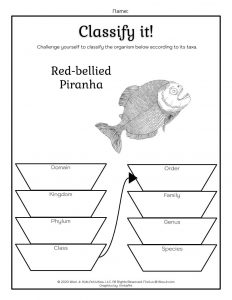 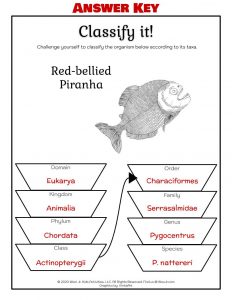 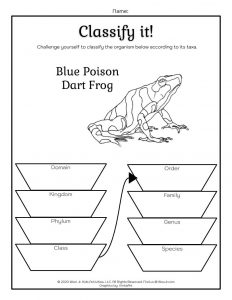 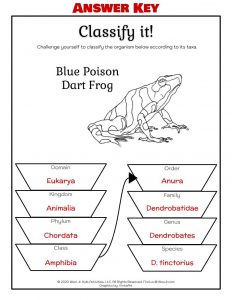 Other activities from Woo! Jr. 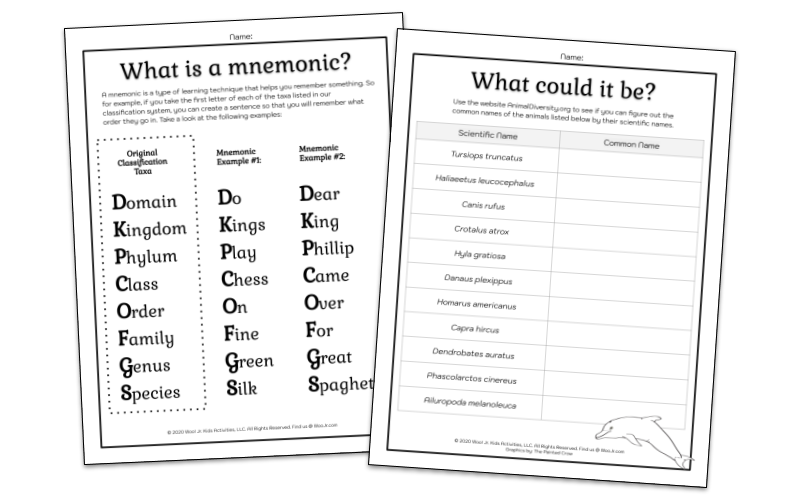