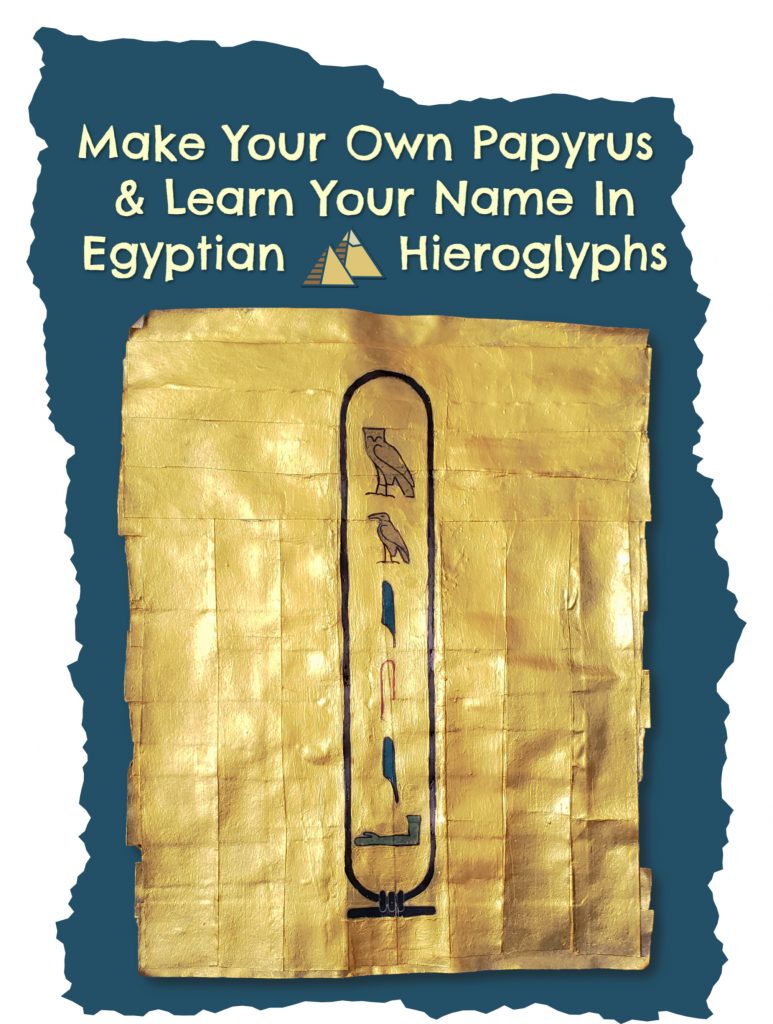 Now that we’re all spending a lot more time at home, it’s the perfect time to expand your homeschooling efforts with art projects.

We’re studying Egypt this week, so I planned this art project with two educational points in mind:

Here is an example of an ancient Egyptian Papyrus.

Now for the fun part – the art project!

With this project, you will learn:

Supplies needed for this project are: 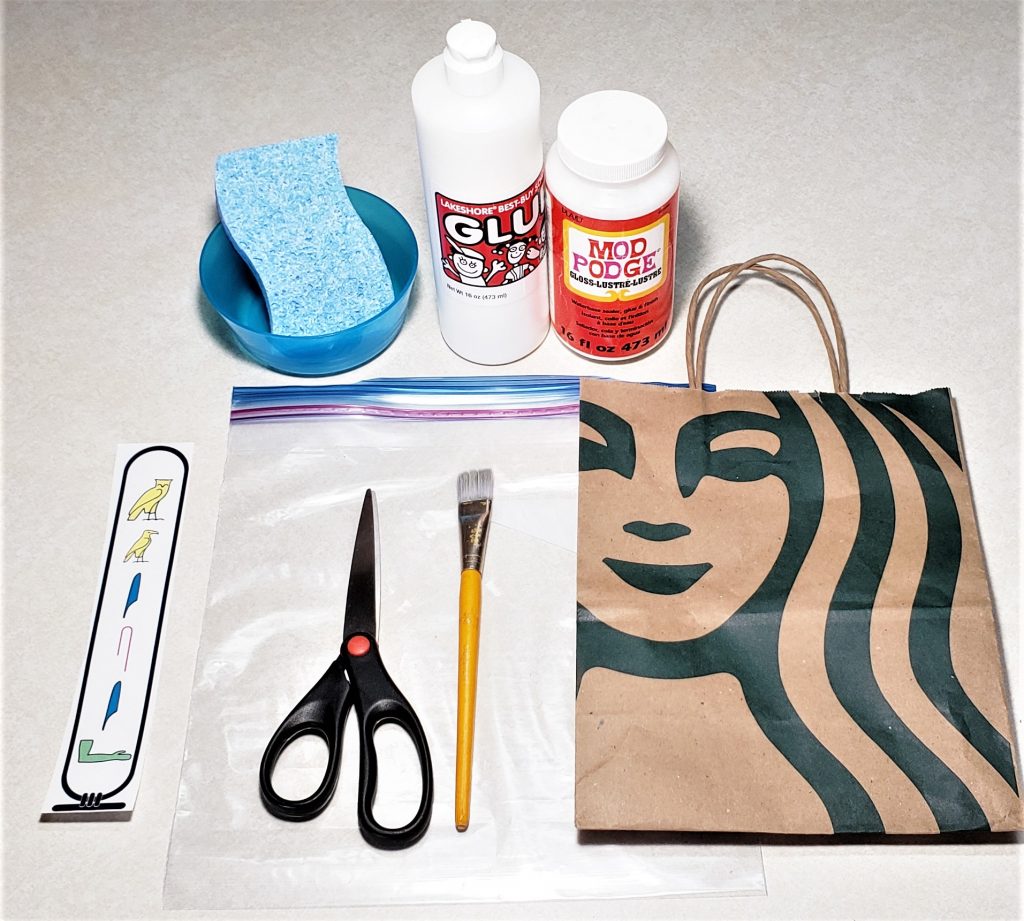 Papyrus was a writing material used over 5,000 years ago in Ancient Egypt.  Papyrus is made from the papyrus plant, a reed that grows around the Nile River.  The plant is peeled and cut it into thin strips.  The strips are layered with one another and dried in a press to create a papyrus sheet for writing.

The Library of the University of Michigan has an excellent slideshow on papyrus making.  You can find the slideshow here. 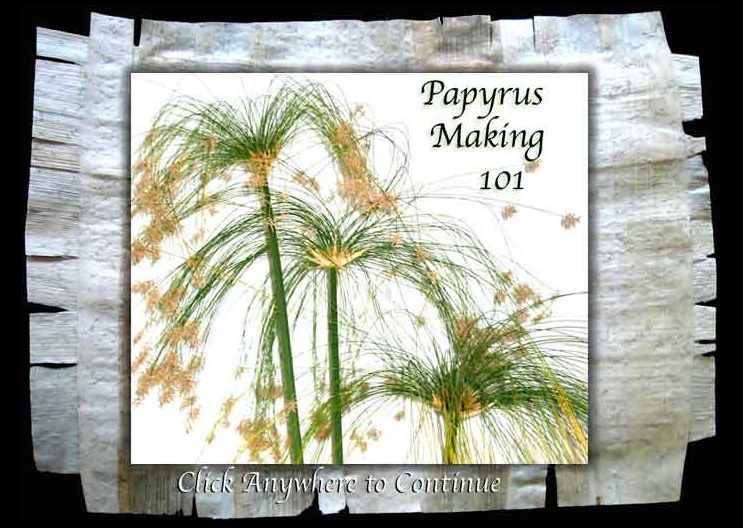 The first step in making your papyrus is the prepare the strips.

Using scissors, cut open the paper bag.  Trim away the top and the bottom of the bag to leave you with one large piece of paper.

Cut the paper into thin strips.

Next, create your glue mixture.  Using a ¼ measuring cup and fill it half-way with water.  Add glue to fill the cup to the top.  Mix the glue and water in a small bowl. 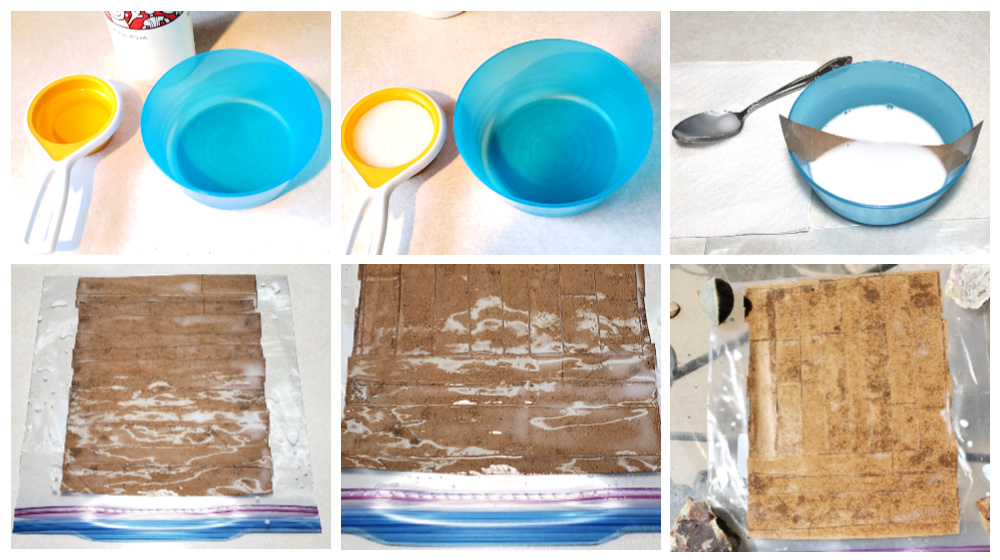 Dip the strips in the glue mixture and arrange them on top of the Ziploc bag.  Apply one layer of strips in the same direction and then add a second layer in the opposite direction so the layers are perpendicular to one another.

Allow the papyrus to dry.  The glue will dry faster if you can set it outside.  Be careful that it’s not in an area where dirt or debris will dry on the papyrus.

Once the papyrus is dry, you can easily peel it away from the plastic bag.

Learn Your Name in Egyptian Hieroglyphs

Hieroglyphs were the writing system used by Ancient Egyptians with over 1000 different characters used to express language in pictures! 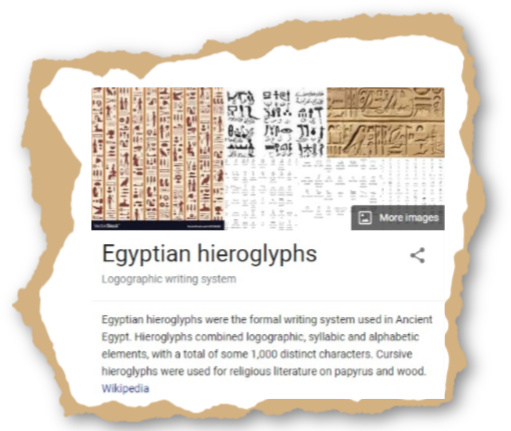 To learn how to write your name in Egyptian Hieroglyphs – visit the website of the Penn Museum.  The Penn Museum is the University of Pennsylvania Museum of Archaeology and Anthropology.

In addition to their Egyptian exhibit, they have an online resource to see your name translated into Egyptian hieroglyphs. 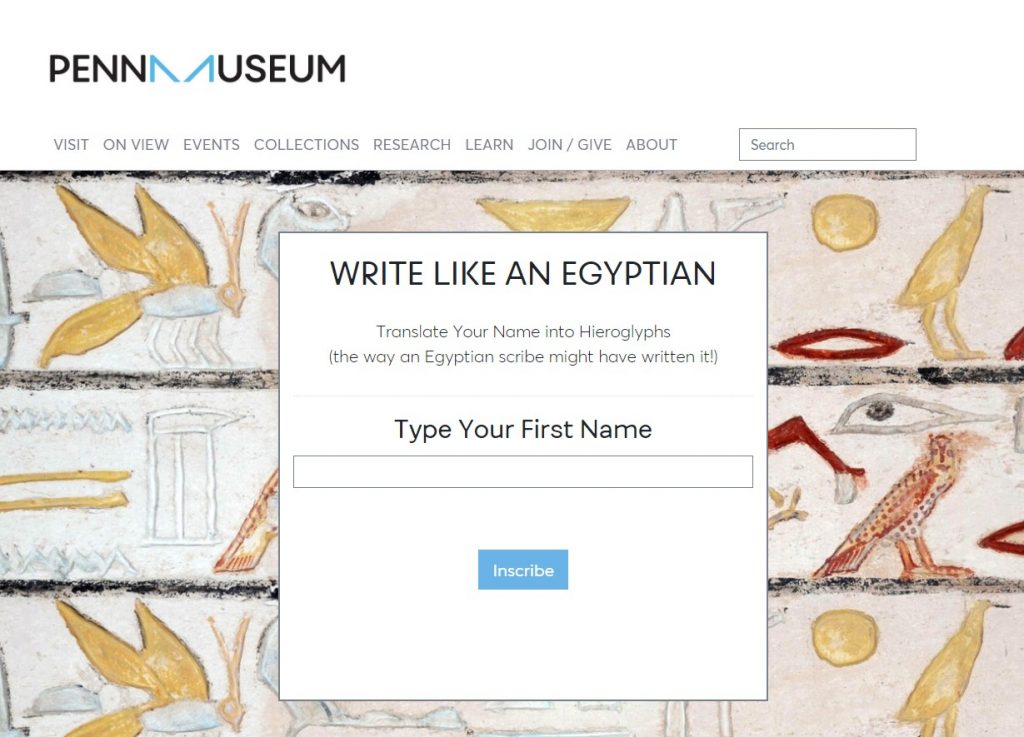 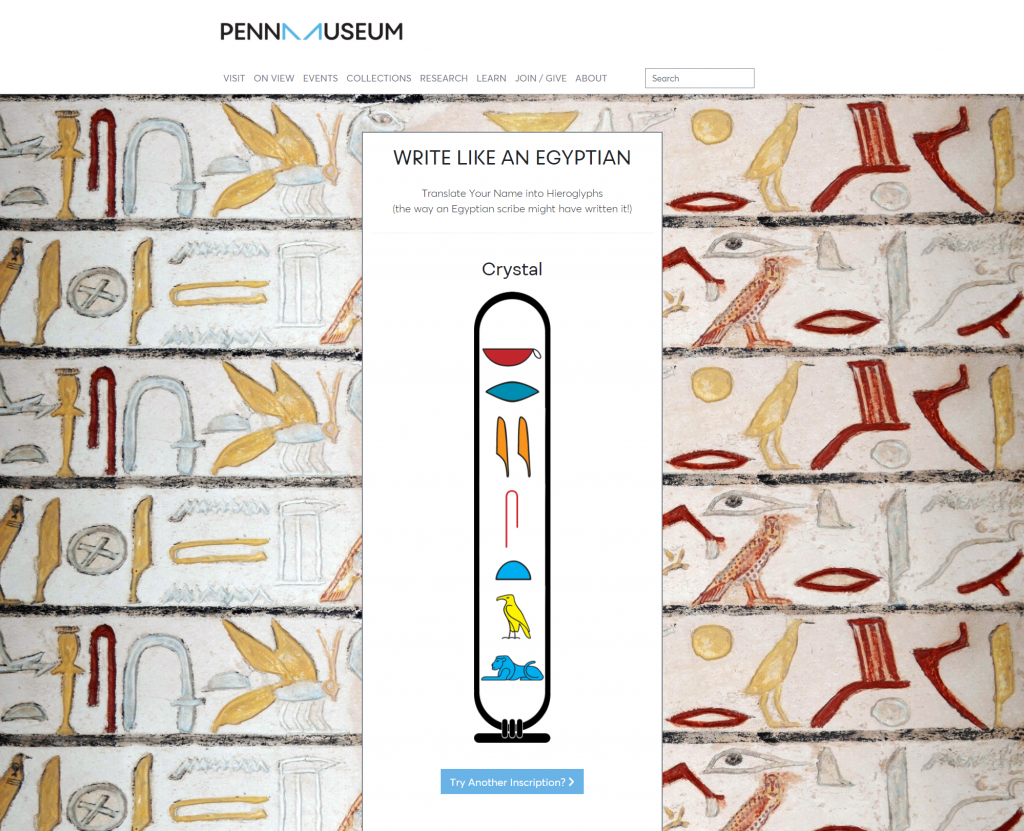 The easiest way to capture the image of the hieroglyphs is to take a screen capture.  Include the oval that encircles the hieroglyphs.  You can include the name at the top if you’d like as well.

You’ll notice the hieroglyphs are encircled with an oval shape and a line at the bottom.  This rounded shape is called a Cartouche. 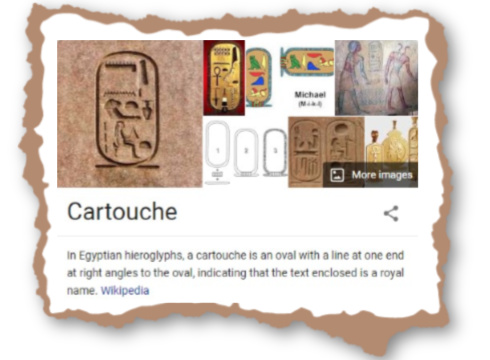 In ancient Egypt, the cartouche was used to indicate a royal name inside.  The oval shape represents a rope and the line at the bottom represents where the rope is tied.

*If you do not want to transfer a LaserJet print of the cartouche to the papyrus you can simply use the printed cartouche as a reference to draw your cartouche with any art supplies you’d like on your papyrus.

*Very important note for image transfer – the image needs to be flipped to the mirror image for printing so that when transferred, it reads properly.

Print the reversed image about 8 inches tall and cut it out from the paper.

Now for the image transfer.

Decide where you would like to place the image and use your paintbrush to apply a thin layer of mod podge to the papyrus. 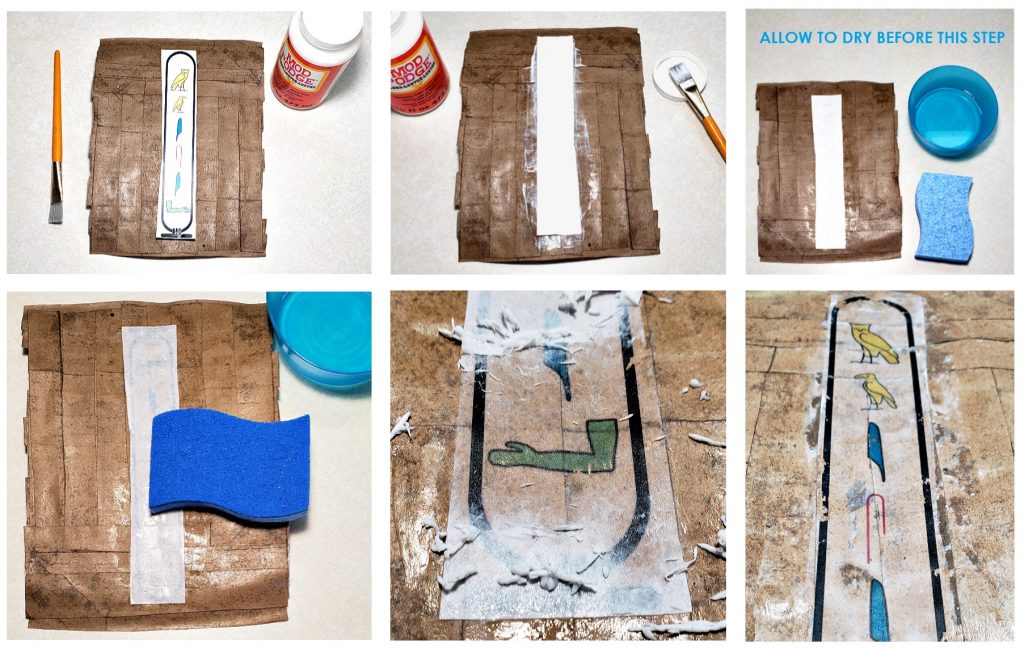 ALTERNATIVE: Use these Egyptian Hieroglyphs code breakers to draw your own cartouche with your name in it! Notice that some Egyptian letters are actually English digraphs, which are combinations of two letters that make one sound (ch, sh, and kh). 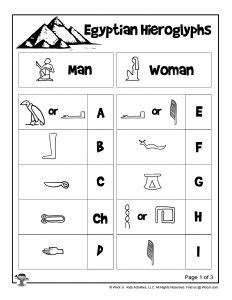 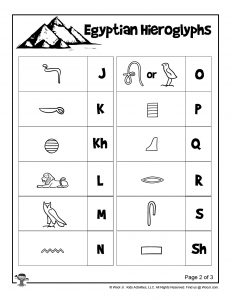 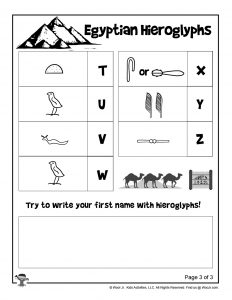 The rest of the project is up to you!  You can keep it as simple or complex as you’d like.

If you like the transfer as is, I recommend a layer of mod podge over the whole thing as a finishing touch since the area where you removed the paper will dry rather dull and any surrounding areas with mod podge will be shiny. 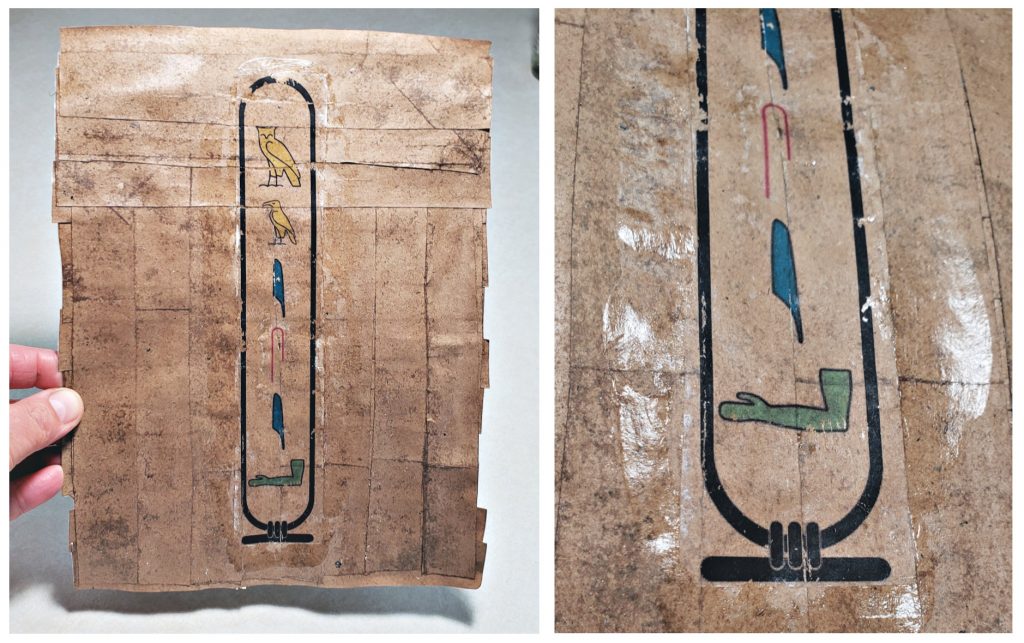 We decided to jazz it up a bit!  When I think of Egypt – I think of one color GOLD.

Look at what a difference a little gold acrylic paint makes! 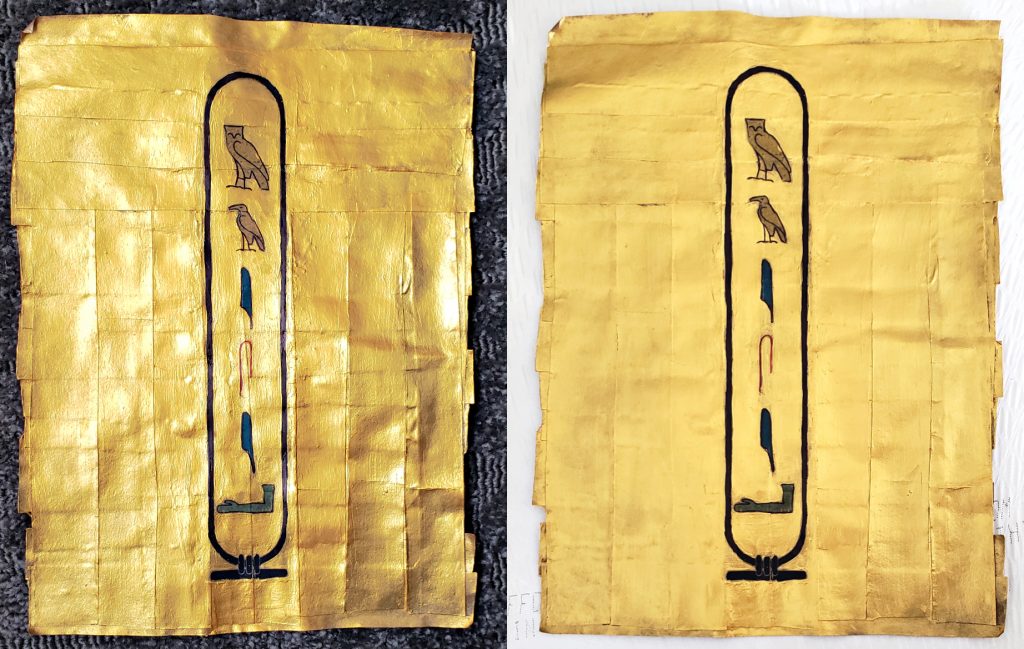 I included the light and dark backgrounds since gold is a bit tricky to photograph.

We also filled in a few areas that rubbed off in our transfer with markers. 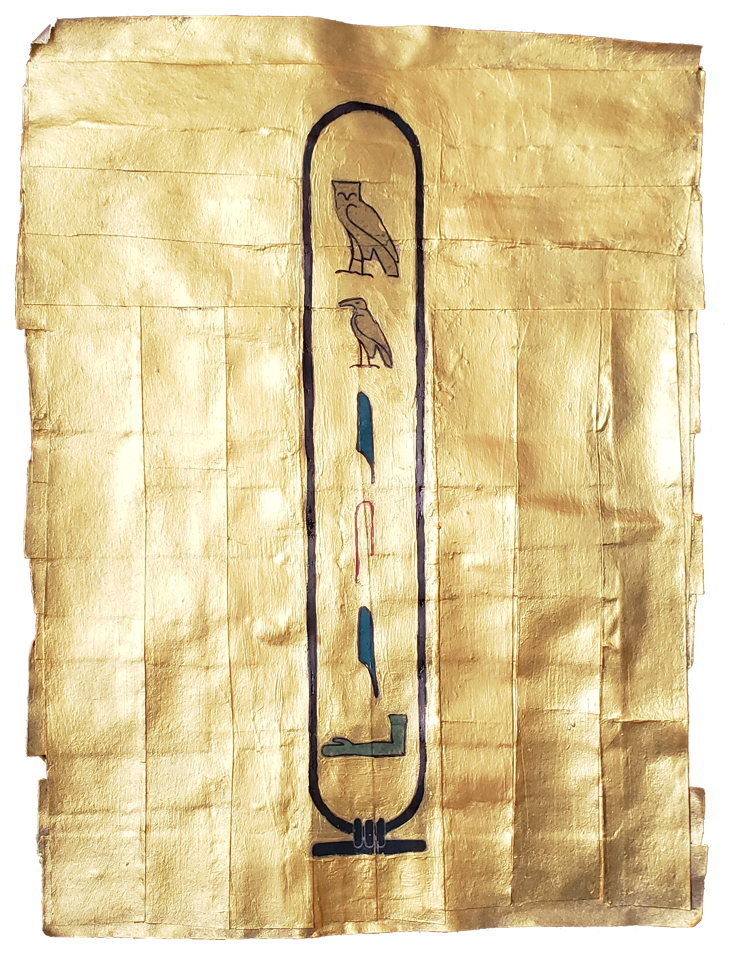