I’ve been unable to post new projects lately because my laptop had died (yeah, the new one I bought at the beginning of the year!!). So I’ve pulled up one of my favorite projects from the archives, just in time for Mother’s Day.

I’ve been holding onto this craft for a few days, and I’ve decided I can hold onto it no longer. It’s my new favorite craft on this site, and I think it would be a perfect thing to do with kids for a Mother’s Day craft (though I think the plant marker garden craft come in a close second on that). 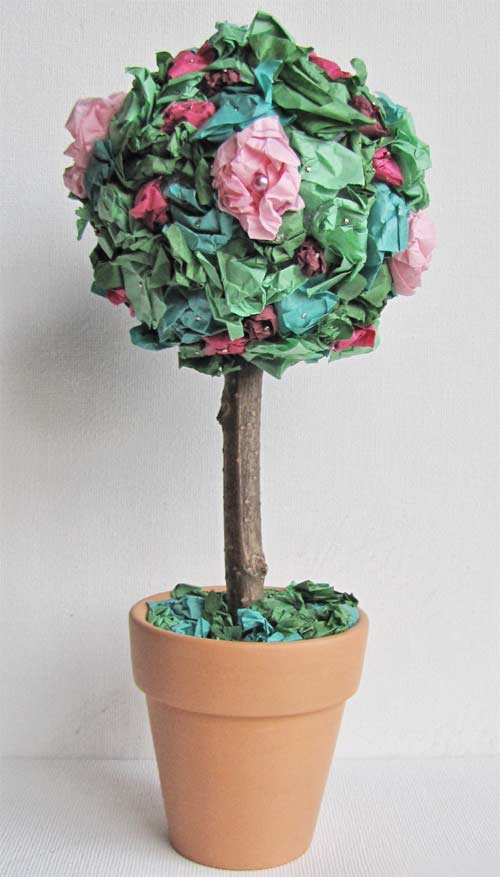 I’m actually thinking of making myself a two-tiered one to put in my office. That seems so dorky when I say that out loud though…

What You Need to Make the Tissue Paper Flower Topiary

3 sheets of pink tissue paper (again ideally in three different shades of pink, or whatever three colors you want)

I think the reason this turned out so well was because I was able to use different shades of green and pink tissue paper. Normal tissue paper packages don’t come so nicely shaded for paper flower crafts, but I swear by a huge package of tissue paper I am able to get at Hobby Lobby for $5.

How to Make the Tissue Paper Flower Topiary 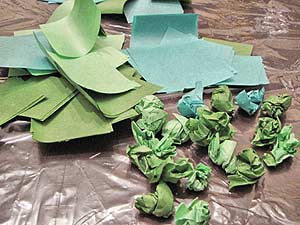 First cut up the green tissue paper into approximately 2 inch squares. They are going to get crumpled up, so don’t worry about being precise or anything.

Start scrunching up the squares into loose little balls. I found it worked best if I rolled them between my hands as if it were clay I was trying to roll into a ball. Even on a tiny ball you will need a surprisingly large number of these, because you want them to be relatively close together. 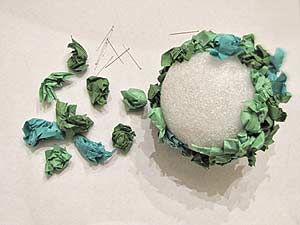 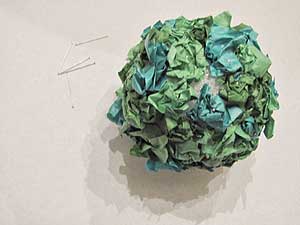 Next just start pinning them to the styrofoam ball. Don’t put them too close together, because you will want to have room to put in the flowers. You can see in the second photo how close I put them together. 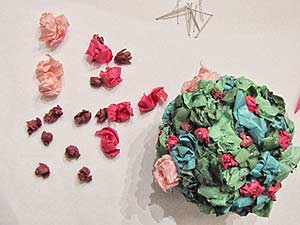 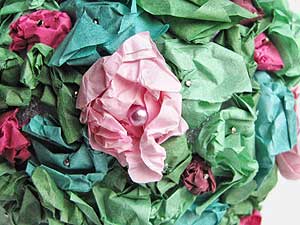 Now cut up your pink tissue paper into squares. For the largest flowers I used about 3 inch squares, the medium about two inch squares and the small about one inch squares. Again, this is approximate, because they are just going to get crumpled up again.

Add the largest flowers first, because they will be the most prominent and need to be placed somewhat evenly around the ball. I thought I was going to add a lot, but found that four was plenty. If you can find straight pins with the pretty pearl tops, use those to attach the largest flowers. If you have a lot of those, you can also use them for your smaller flowers too. I didn’t, so I just used regular straight pins everywhere else.

Then add the smaller flowers in between the green ‘leaves’ where you can still see the styrofoam. 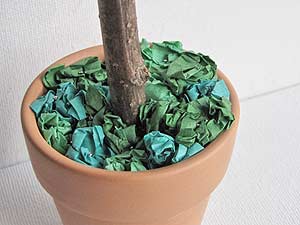 Next, decide what part of the ball you want to be the top, and stuff the stick from your yard into the bottom. I didn’t take a picture of this part, because it’s pretty dang easy to do. Then shove the cylinder or dough into the flower post, and stuff the stick into the midde so that it is standing straight up.

Cover the foam base with green tissue like you did the top ball, but this time, don’t let the styrofoam peek through. 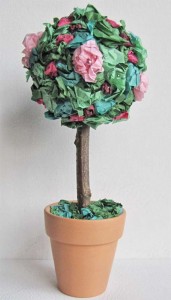