The summer of 2019 marks the 50th anniversary of the historic first moon walk, which happened on July 20, 1969. This first moon landing lesson plan covers the details of that historic event and why it still matters today. 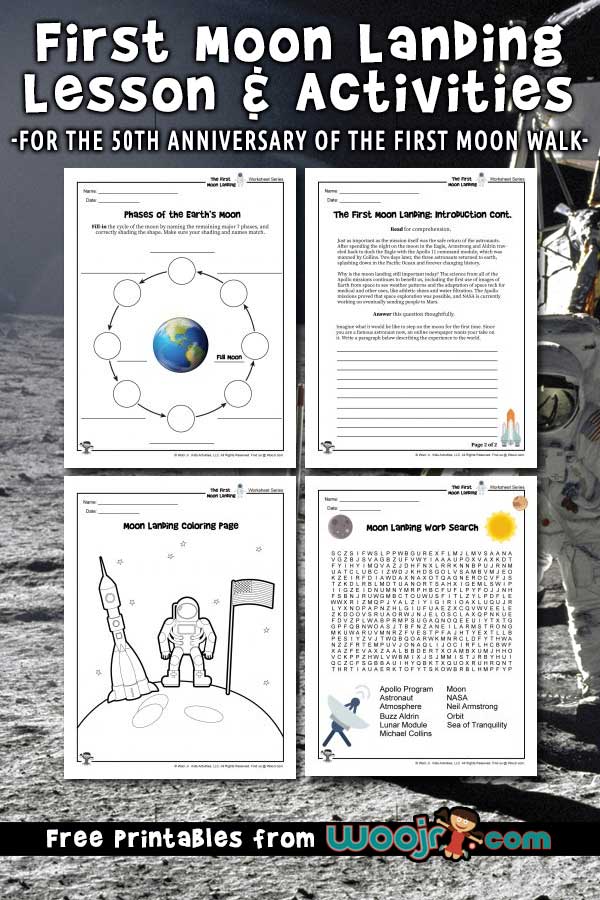 In the 1950s, several countries were competing to be the first to send a human into outer space. Russia was the first to succeed, sending cosmonaut Yuri Gagarin into orbit around the earth in 1961. That same year, U.S. President John F. Kennedy set a challenge to send people to the moon by the end of the decade.

This led the scientists at the National Aeronautics and Space Administration (NASA) to develop the Apollo Program, a series of missions designed to get astronauts to the moon. The 11th Apollo mission sent three astronauts (Neil Armstrong, Edwin “Buzz” Aldrin, and Michael Collins) into orbit with the moon as its destination. In an era before cable or streaming TV via the Internet, millions of people gathered around their televisions to watch the moon landing as it happened.

After a successful liftoff from Earth, Apollo 11 reached the moon’s orbit 76 hours later. Collins stayed in the main Apollo command module while Armstrong and Aldrin used the lunar module, nicknamed Eagle, to travel to the moon’s surface. The moon landing was daring, with the Eagle touching down with only 20 seconds of landing fuel left. After six hours of safety preparations in order to survive on the moon’s surface, Neil Armstrong stepped outside onto the shallow crater on the moon’s surface known as the Sea of Tranquility. His words during that historic moment are now famous: “That’s one small step for man, one giant leap for mankind.” Astronaut Buzz Aldrin joined him soon after, and they spent hours performing tests and collecting samples of rock to bring back to earth.

Just as important as the mission itself was the safe return of the astronauts. After spending the night on the moon in the Eagle, Armstrong and Aldrin traveled back to dock the Eagle with the Apollo 11 command module, which was manned by Collins. Two days later, the three astronauts returned to earth, splashing down in the Pacific Ocean and forever changing history.

Why is the moon landing still important today? The science from all of the Apollo missions continues to benefit us, including the first use of images of Earth from space to see weather patterns and the adaptation of space tech for medical and other uses, like athletic shoes and water filtration. The Apollo missions proved that space exploration was possible, and NASA is currently working on eventually sending people to Mars. 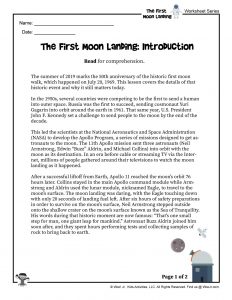 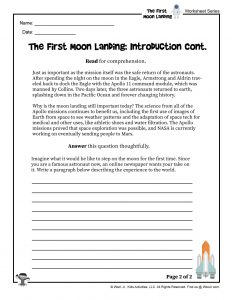 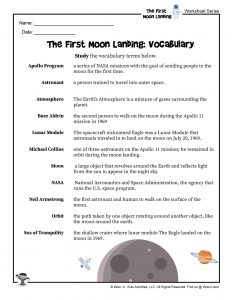 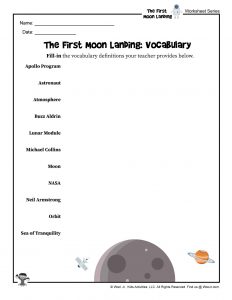 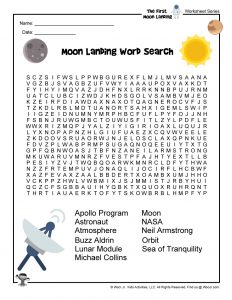 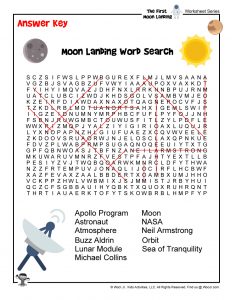 The ___________ is a large object that revolves around the Earth and reflects light from the sun to appear in the night sky. (moon)
An _________ is a person trained to travel into outer space. (astronaut)
The Earth’s _________ is a mixture of gases surrounding the planet. (atmosphere)
_______ stands for National Aeronautics and Space Administration, the agency that runs the U.S. space program. (NASA)
The _________ was a series of NASA missions with the goal of sending people to the moon for the first time. (Apollo Program)
The spacecraft nicknamed Eagle was a __________ that astronauts traveled in to land on the moon on July 20, 1969. (Lunar Module)
An _________ is the path taken by one object rotating around another object, like the moon around the earth. (orbit)
_________ was one of three astronauts on the Apollo 11 mission; he remained in orbit during the moon landing. (Michael Collins)
Astronaut ________ was the first astronaut and human to walk on the surface of the moon. (Neil Armstrong)
___________ was the second person to walk on the moon during the Apollo 11 mission in 1969. (Edwin “Buzz” Aldrin)
The _________ is the shallow crater where lunar module The Eagle landed on the moon in 1969. (Sea of Tranquility) 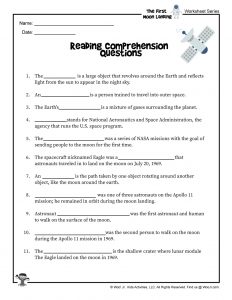 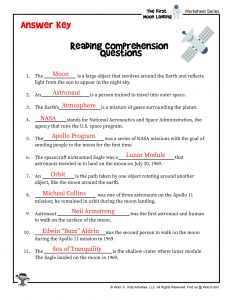 Students will learn about perspective and measuring distance by comparing everyday objects to measure the distance to the moon.

According to NASA, the moon is not always the same distance from the earth because its orbit is not a perfect circle. This means that on average, the moon is 238,855 miles from Earth.

To give perspective on the distance of a mile, offer examples of landmarks near the school and your town: ”The distance from the front door of the school to the back fence behind the track is two miles. How many of our schools would it take to reach the moon?”

Show students how to calculate this distance by dividing the distance between the earth and the moon by the size of your school lot: 238, 855 / 2 = 119,428 — that’s how many of your schools you’d have to lay side by side to reach the moon.

Ideas for other things to offer perspective on the distance to the moon include:

Students will learn about the moon by studying the eight moon phases and what causes them and will be able to identify them by drawing their shapes. 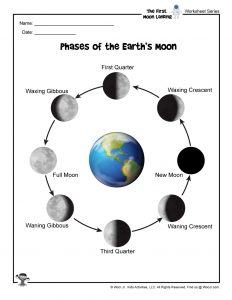 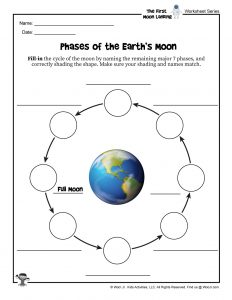 An illustration depicting the eight moon phases to use as a model (use our printable above!)
Plain white paper (larger sketchbook-size sheets are ideal)
Pencils for sketching and labeling the moon phases

Using an illustration of the eight phases of the moon, explain to students that the moon does not really change shape or disappear throughout the month. Each moon phase is determined by the amount of sunlight reflecting on its surface during its movement in orbit in relation to the earth. Have students draw and label each of the eight moon phases on their sheets of paper:

You can also do this project as a “Moon Journal,” where students spend a month looking at the moon at nighttime and drawing what they see, then labeling which phase it is in. 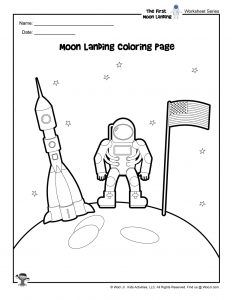 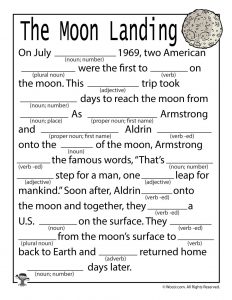 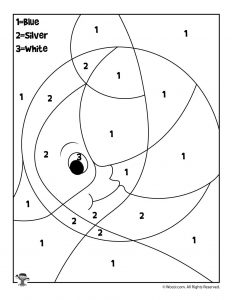