Today we’re sharing a wonderful new Susan B. Anthony for kids unit for Women’s History Month! We’ve provided a printable biography, vocabulary word list and worksheets, along with coloring pages and a poem. 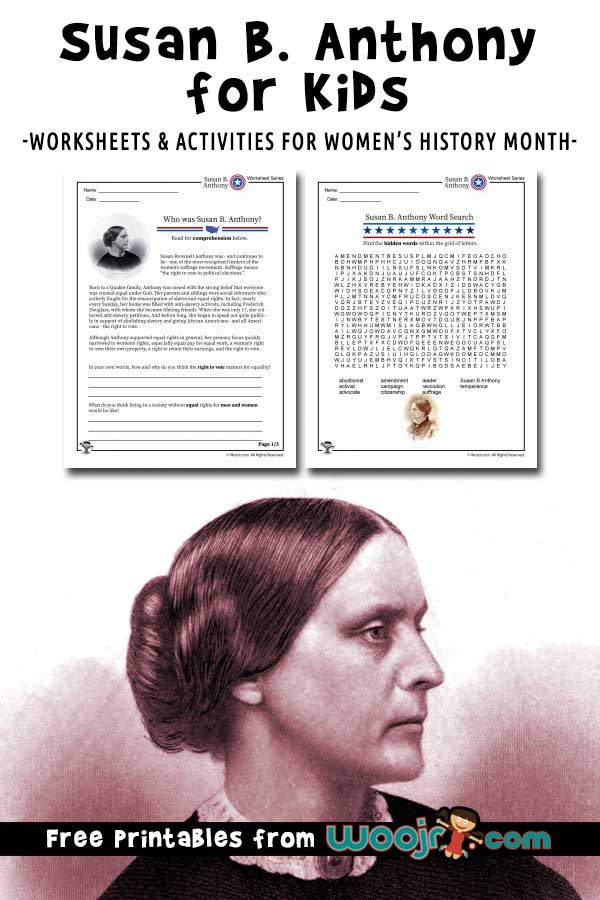 Who was Susan B. Anthony?

Susan Brownell Anthony was – and continues to be – one of the most recognized leaders of the women’s suffrage movement. Suffrage means “the right to vote in political elections.”

Born to a Quaker family, Anthony was raised with the strong belief that everyone was created equal under God. Her parents and siblings were social reformers who actively fought for the emancipation of slaves and equal rights. In fact, nearly every Sunday, her home was filled with anti-slavery activists, including Frederick Douglass, with whom she became lifelong friends. When she was only 17, she collected anti-slavery petitions. And before long, she began to speak out quite publicly in support of abolishing slavery and giving African Americans – and all Americans – the right to vote.

Although Anthony supported equal rights in general, her primary focus quickly narrowed to women’s rights, especially equal pay for equal work, a woman’s right to own their own property, a right to retain their earnings, and the right to vote.

In 1851, Anthony met Elizabeth Cady Stanton, another American suffragist and abolitionist (a person who believed in abolishing slavery in the United States). The two women became fast friends and a powerhouse at the forefront of the women’s suffrage movement. Together they organized the Women’s Loyal National League (the first national women’s political organization in the U.S.). The League campaigned for an amendment to the U.S. Constitution that would abolish slavery. Anthony was the chief organizer and the League collected an amazing 400,000 signatures for a petition to end slavery. Anthony traveled the country giving speeches, sometimes speaking as many as 75 to 100 times in one year. It was a dangerous business because emotions ran high and many people became violent because they disagreed with her. Ten years after they met, the American Civil War began.

Anthony and Stanton both recognized that bringing an end to slavery and granting blacks the right to vote were important to the women’s movement. The message that they embraced and preached to the country hinged on equality for all.

The Civil War officially ended in April of 1865. In December of the same year, the 13th Amendment. It made slavery illegal, which brought slavery to an end in the United States. The 14th Amendment, which granted citizenship to all persons born or naturalized in the United States—including former slaves—and guaranteed all citizens “equal protection of the laws,” was adopted in 1868. Two years later, the 15th Amendment was passed and granted all male citizens the right to vote. They could not be denied because of their “race, color, or previous condition of servitude.”

While joyful for the victories, Anthony was still disappointed that women were not included in the 15th Amendment. She continued to speak out in favor of women’s right – especially the right for women to vote – at events across the country. Anthony and Stanton launched their own weekly newspaper, The Revolution, which advocated for women’s rights and suffrage. They also organized and formed numerous meetings and organizations, such as the Eleventh National Women’s Rights Convention (which voted to transform itself into the American Equal Rights Association), the Working Women’s Association (WWA), and the National Woman Suffrage Association.

Anthony became the face and voice of women’s suffrage as she continued to tirelessly travel across the country for speaking engagements. And in 1872, Anthony defiantly registered to vote in the country’s presidential election. Somehow, she and 14 other women convinced the election inspectors to let them cast their vote in their ward. A few days later, she was arrested by a U.S. Deputy Marshal and charged with illegally voting. In the days leading up to her trial – United States v. Susan B. Anthony – Anthony gave speeches in the county from which her jurors would be selected. Her speech was titled, “Is it a Crime for a U.S. Citizen to Vote?” and described her outrage over having her citizen’s rights denied. The national press closely followed her trial adding to her fame across the country. The judge ordered the jury to deliver a guilty verdict and he sentenced Anthony to pay a fine of $100. She refused to do so, possibly hoping to be jailed so that she could take her plea to the Supreme Court, but the judge would not put her in jail.

Determined to create change, Stanton and Anthony didn’t limit their fight for suffrage to the United States. In fact, they traveled and met with leaders of European women’s movements and began the process of creating an international women’s organization, which they called the International Council of Women. The ICW is still active today and is associated with the United Nations.

Sadly, Anthony didn’t live long enough to see the 19th Amendment pass, which granted women the right to vote in the U.S. She died in 1906 of heart failure and pneumonia when she was 86 years old. The 19th Amendment was ratified 14 years later. Historians agree that Susan B. Anthony’s tireless devotion and campaigning for women’s suffrage played a major role in making it possible. 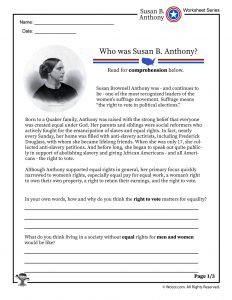 Who Was Susan B Anthony Printable Worksheet 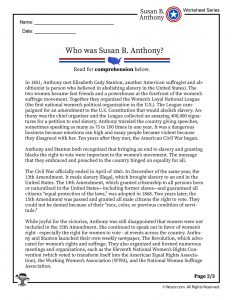 Who Was Susan B Anthony Reading Worksheet 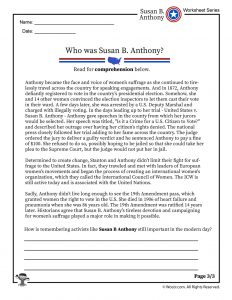 Activities for Learning About Susan B. Anthony for Kids

Help your students learn about this leading women’s rights advocate with these activities:

There are a lot of very specific words not typically used in daily discourse that may be associated with Anthony.

Activity: Download our printable worksheets to help your students increase their vocabulary. Have your older kids look up and define words such as suffrage, abolitionist, campaign, and many more. Younger children can find these words in our word find. 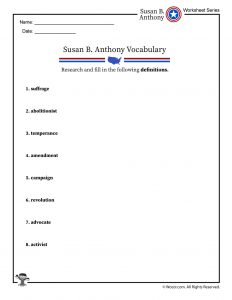 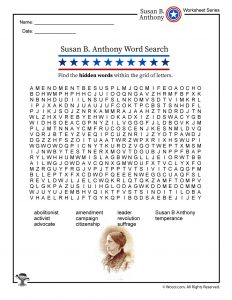 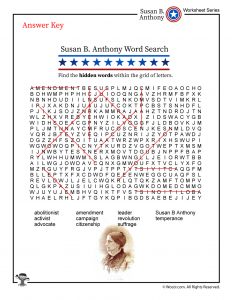 There have been a lot of memorials dedicated to Susan B. Anthony. Fittingly, African Americans were the first to establish a memorial to Anthony. In 1907, a year after Anthony’s death, the African Methodist Episcopal Zion church in Rochester (the city where she lived with her sister) installed a stained-glass window of her portrait and the words “Failure is Impossible,” a quote from her that had become a slogan for the women’s suffrage movement. 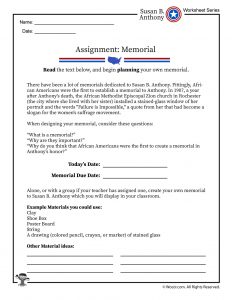 Place your students in teams or allow them to individually research some of the memorials established in Anthony’s honor. Then ask them to create their own memorial to Susan B. Anthony and display their memorials in your classroom.

Check out our Susan B. Anthony poem and coloring pages: