I am so excited to introduce you to the coolest thing I’ve gotten to try out in a long time – Snow In Seconds! You all know I LOVE a multi-use product, so I was over the moon when Snow In Seconds contacted us and offered to send over some of their product for us to play with! 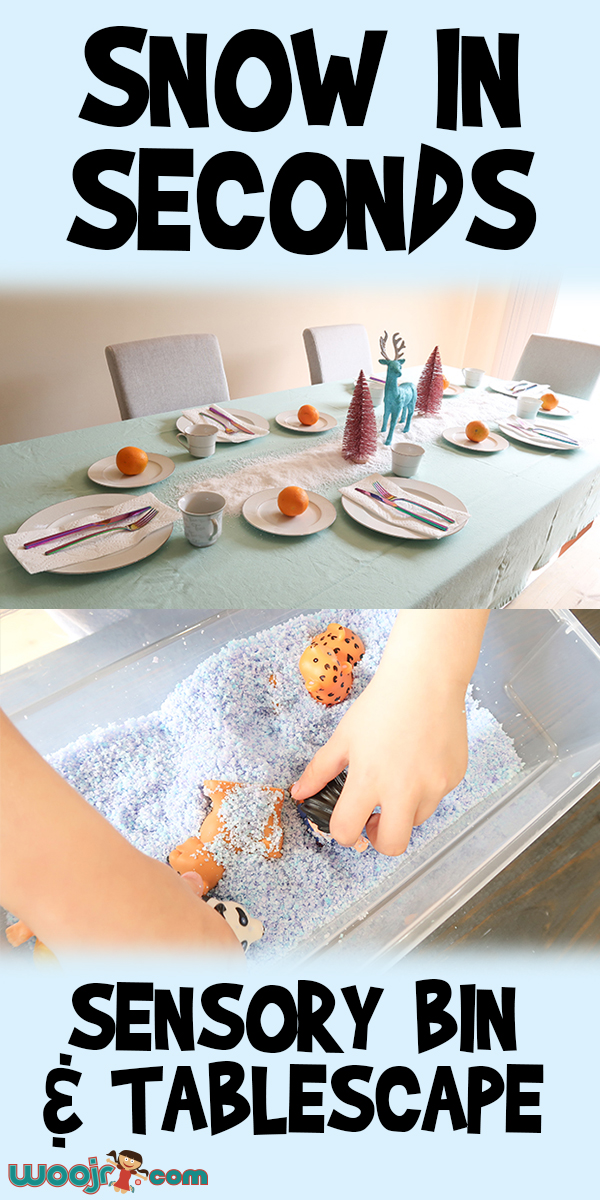 Before I get into the way I like to use this product, let me tell you a little bit more about Snow In Seconds. It’s made right here in the U.S., by a family owned business based in Minnesota. They’re been making Snow in Seconds for 10 years, and it’s the original instant snow! 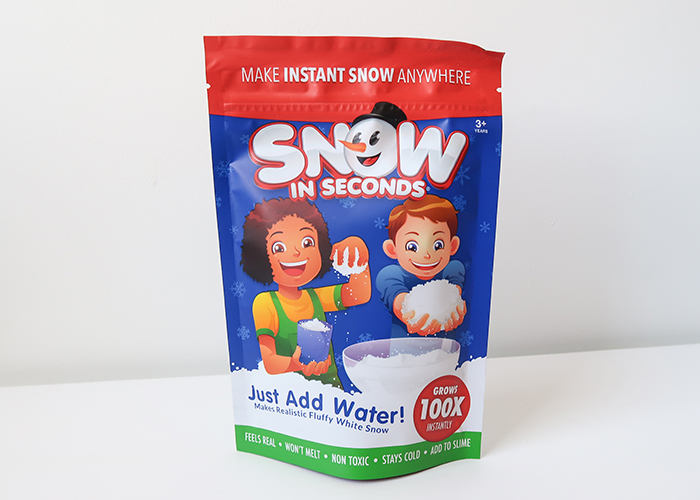 You just add 1/4 cup of water to 1 teaspoon of snow, and it fluffs up instantly. You can mix it with icy cold water for the feel of real snow. I tested it, and it stays cold for days! Or if you have a kid who is sensitive to temperatures, you can use room temperature or warm water. The snow lasts several days before it dries out, and it can be stored in an airtight container and reused.

It cleans up really easily by sweeping or vacuuming, and can be dried out quickly with table salt. It’s non-toxic, safe for kids and pets, safe to use outdoors, and can be disposed of safely in the trash.

Today I’m going to share two ways you can use this snow, plus a few other ideas for how to use it! This is one of those things that I can think of nearly endless uses for, and I love that!

So when I first received this product, I had to play with it right away. I added a 1/4 cup of water to 1 teaspoon of snow in a bowl, and it puffed up immediately. It’s incredibly light, soft, and fluffy. I like that it’s not sticky or clumpy at all, and it’s very calming to play with.

The very first thing I noticed is that this is great for adults who have anxiety or even just high stress levels. If you’re someone who finds kinetic sand or stress balls calming, it might be worth keeping a small container of this snow on your desk to play with when you’re feeling tense. 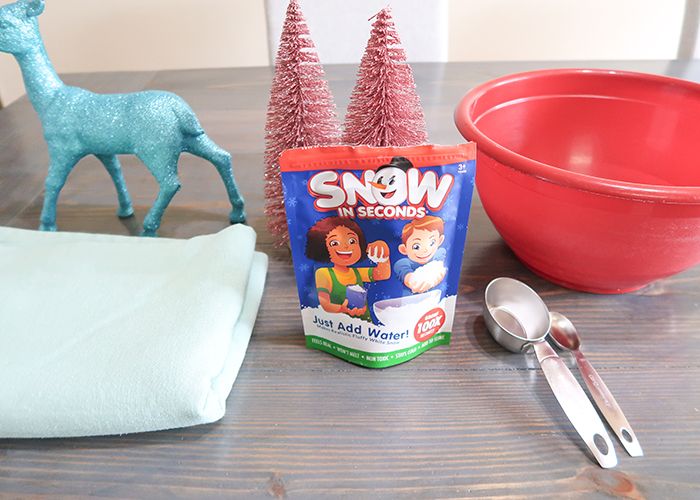 First I want to show you how to make a super easy tablescape that’s perfect if you’re celebrating Christmas in July, or just doing any snow themed party! I’m originally from California, but live in Ohio now, so I’m very familiar with both snowy and sunny holidays. You’ll need Snow in Seconds, a tablecloth, a big mixing bowl, a 1/4 and tablespoon measure, and a couple of decorations. Plus all your tableware for the party. 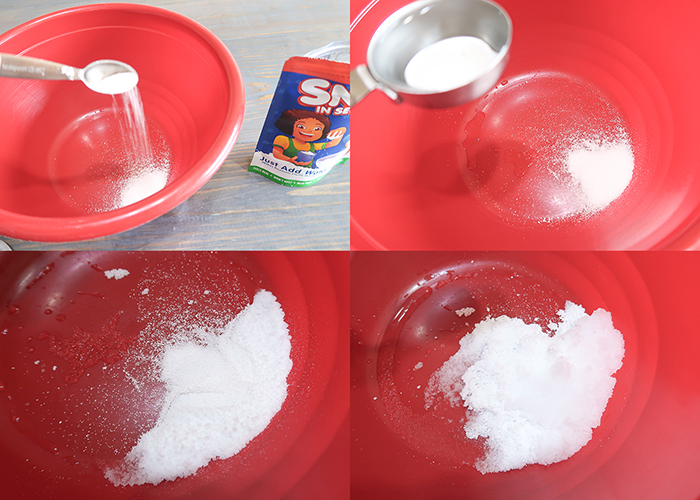 Let’s start by making our snow! If you mix it in small amounts, it’s easier to get it super fluffy. Drop a teaspoon of the powder in your mixing bowl and add in 1/4 cup of cold water. See how it puffs up? It’s hard to show in pictures but it’s so cool! 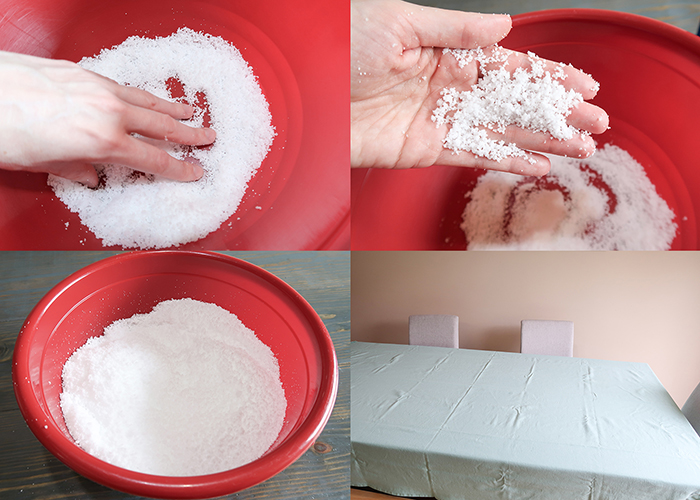 Take your fingertips and give it a quick swirl, and you’ll have a couple handfuls of super fluffy snow! I continued adding in power and water a little bit at a time, and ended up with a whole bowl of snow! It took about 15 teaspoons of powder to make this much snow. Cover your table with your tablecloth, which will hopefully be less wrinkly than mine! Haha! 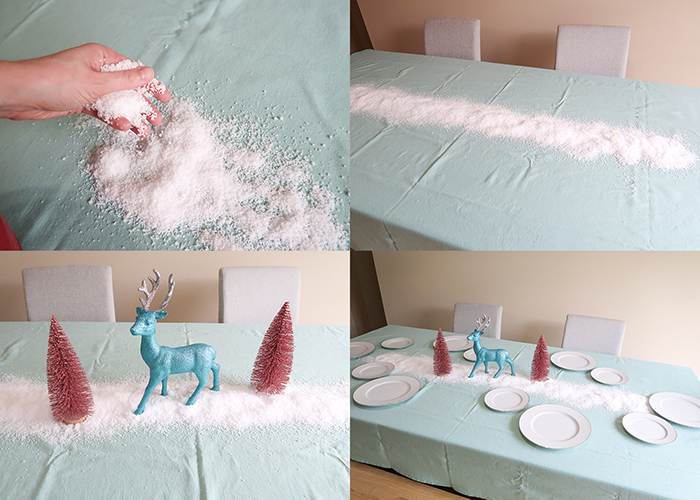 Sprinkle your snow down the center of your tablecloth until it looks as full and fluffy as you’d like. Add your decorations in the center. Then go ahead and lay out your basic place settings. 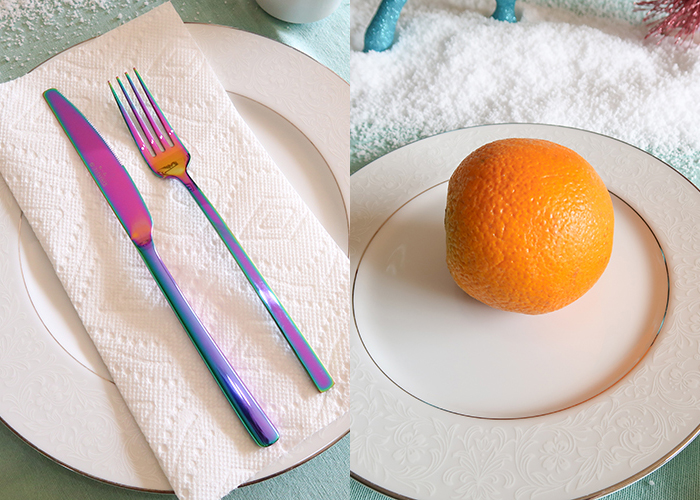 With 4 kids under 11, we keep things pretty casual around here. I placed our colorful knife and fork on a folded paper towel on top of the plate. Adding a bright orange on the bread plate is a nod to the traditional gift of an orange at Christmas, and adds a pop of color to the table. 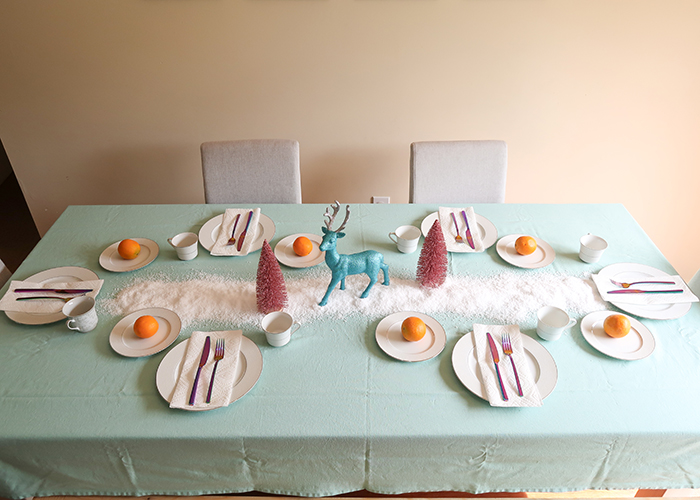 It’s that easy! A bright, fun table that is perfect for a casual Christmas In July dinner party! 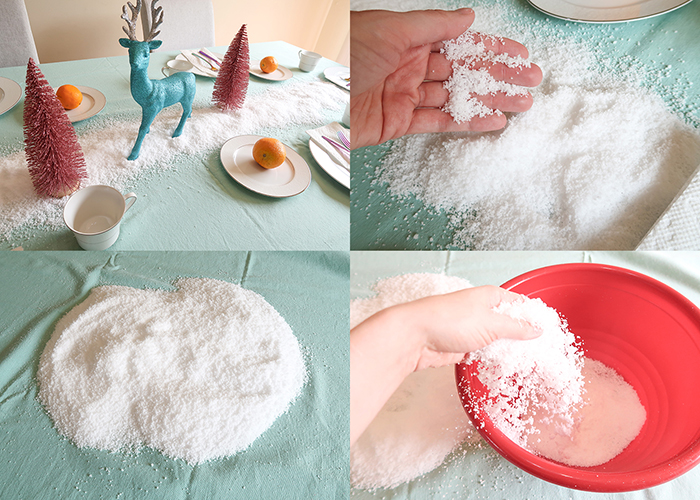 I love the whimsical touch this snow adds to the table, and it can also be used for Christmas villages or mantel displays. When you’re ready to clean up, just lift the corners of the tablecloth to move all the snow into a pile and scoop it back into the bowl. You can let it dry out in a few days and pack it away for later use. Or, if your toddler managed to knock a glass of juice onto it (it happens!), then just dispose of it in the trash. 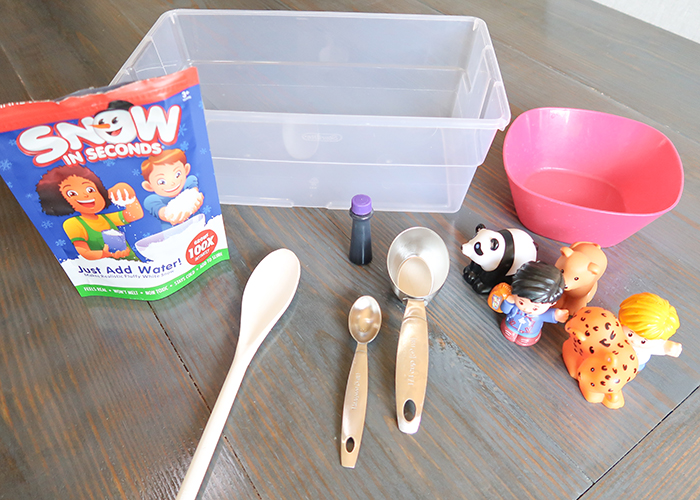 Now let’s do something totally different, and way more interactive! My youngest son was receiving occupational therapy before everything was shut down, and we’ve been continuing that with him at home. One of his favorite things to play with are sensory bins, and Snow In Seconds is perfect for them! Squeezing, picking things up, pinching, and wiggling fingers are great for improving hand strength and dexterity.

To make a sensory bin, you’ll need Snow in Seconds, a big plastic bin, a mixing bowl, a spoon, 1/4 cup and 1 teaspoon measures, food coloring, and waterproof toys. I like using little people, but you can use pretty much any plastic toy. 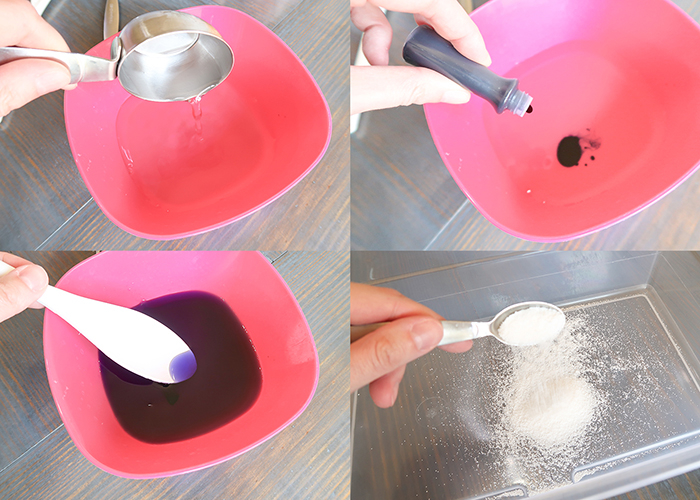 I was amazed when I realized how easily you can color this snow! Just a little heads up, you only need a tiny amount of food coloring. It will come off the snow and onto your hands after a few hours of play, but it’s very light and will wash off after a little bit. Start by putting a 1/4 cup of water into your mixing bowl, and add one drop of food coloring. Mix it well with a spoon. Place 1 teaspoon of snow powder into your bin. 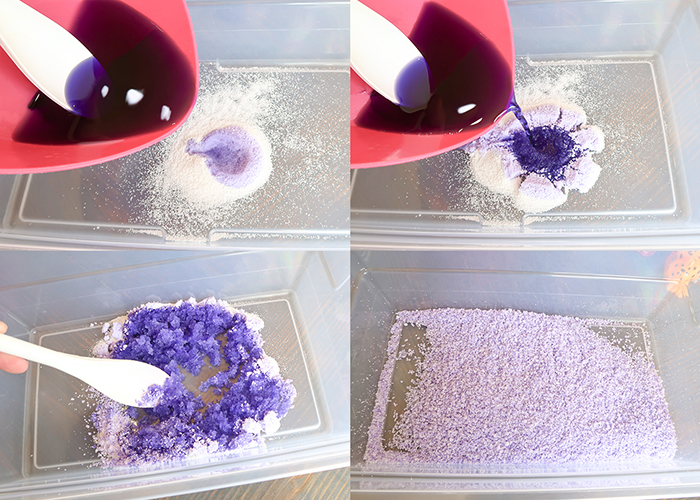 Start pouring the water into the snow, and mix it up with the spoon to avoid getting dye on your fingers. Tada!! Now you have purple snow! I love this so much. 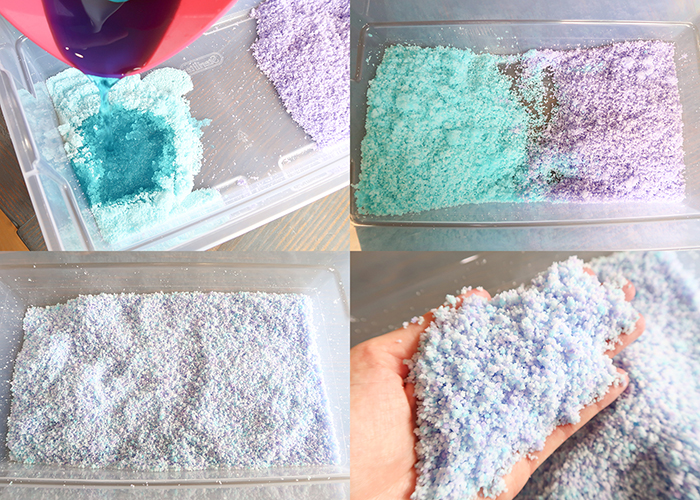 I just had to make teal snow too! Then I mixed the two together for a pretty multicolored snow. 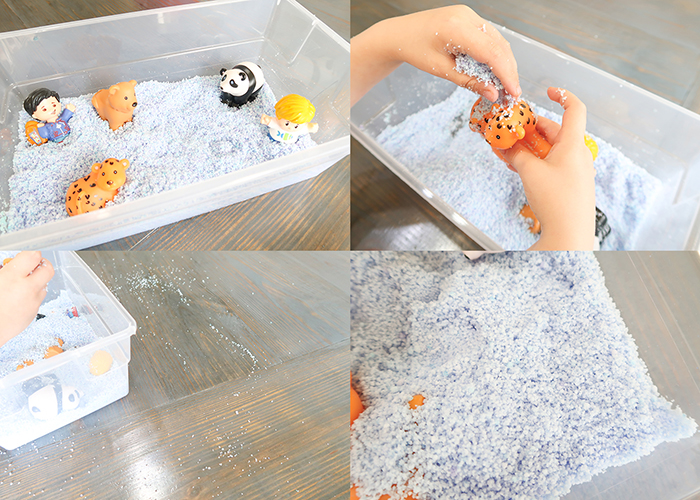 I added the animals, and let my 4 year old have a blast! When they’re done playing, you can pop a lid on the bin and it will stay fluffy for several days. Or, you can let it dry out to reuse later. My son kept asking “Can I play with my snow again?” Just so you know, it does get messy, so make sure to play on a water friendly surface. Also, I noticed that after several hours of play the two colors blended together to make a pretty periwinkle. So, if you’re going to use multiple colors together, make sure they are colors that are pretty when mixed. 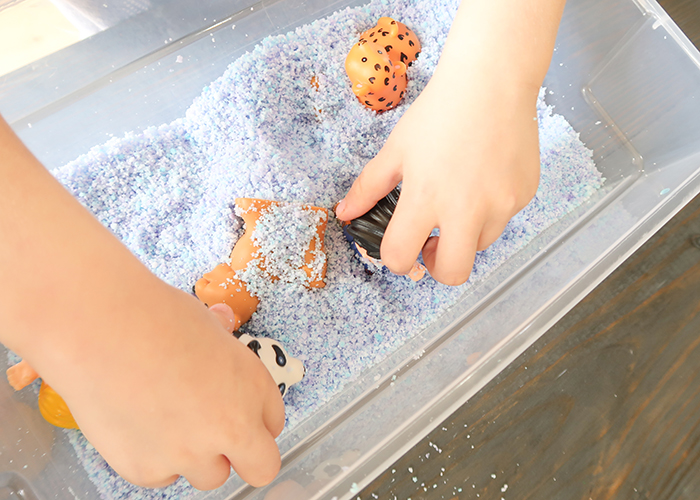 Frankly, I was amazed at how long this kept my son busy! Anything that can keep a preschooler occupied for over an hour is a miracle in my books. Since we’re planning on doing distance learning with our older kids this year, I’m going to break out this bin when he needs to be kept occupied when I’m working with the older ones!

I’m notoriously picky and hard to please, and Snow In Seconds has my seal of approval! I think this is an incredible product, and my kids absolutely love it! Make sure to check out the Snow In Seconds website for additional ideas and information, and to pick some up for yourself.