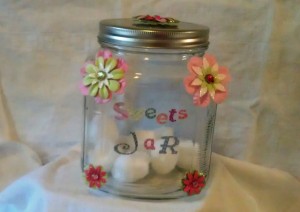 We recently developed a reward system here at our house.  Unfortunately, my two oldest girls (ages 4 and 2) are starting to experience some sibling rivalry.  I’m pretty tired of the constant whining (“She pinched me!”) and scheming (“If you don’t give me that toy, I won’t play with you.”) and all the tears and timeouts that accompany it.  So, when I saw this idea for a reward system, I thought we’d try and use it to encourage kindness between them.

When I notice them being kind to one another, they get to put a pom-pom in the “sweets” jar.  (We actually use cotton balls.)  My aim is to focus them on being nice to each other.  When the jar is full, they get a special reward.  I like that they work together to fill it and hope that helps instill a sense of cooperation between them.  To add to their buy-in, I had the girls help me make the jar.

What You Need to Make a Reward System “Sweets Jar” 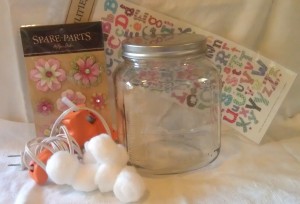 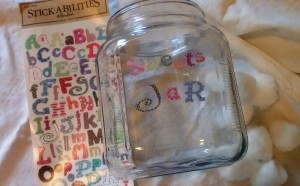 Use the letters to let the world know what you’ve made.

When I originally saw this idea, the jar said “caught ya being good” (you should check out how she uses it for positive reinforcement in her classroom), but I wanted to change the wording.  After a few ideas, I decided on “sweets jar” because they get rewarded for doing sweet things. 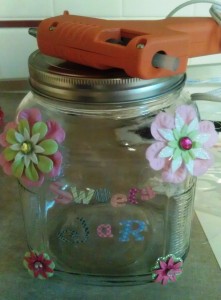 Glue on your other decorations, and you’re good to go!