Earth Day is right around the corner! I have been doing a lot of crafts with tissue paper lately, which means I have had a crapload of tissue paper scraps to throw away. I always hate doing that, because I know you can do cool stuff with small pieces of tissue paper, but it’s incredibly impractical to save them after a craft project.

Until I come up with a cool tissue paper saving system, I figured I should do something with the scraps right away, because, you know, it’s not really the right week to throw things away like that! So I had already set aside my kids’ raisin boxes and Jello boxes, and somehow making aliens was the logical next step!

You can totally make these cardboard box aliens without tissue paper scraps and without the mess of decoupage. Just use paint instead. 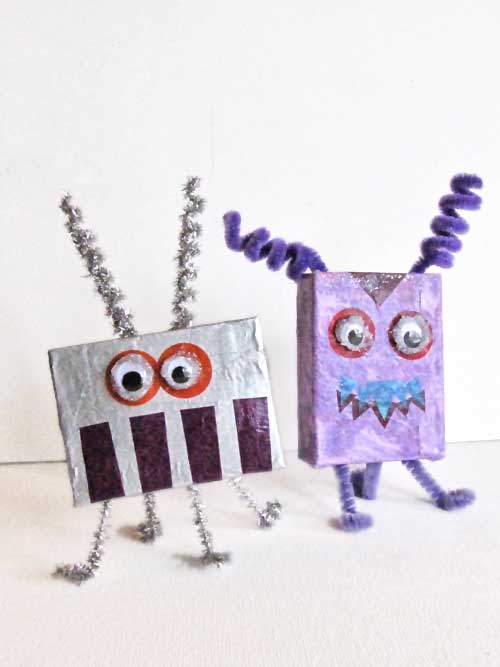 Also be sure to check out our recycled object robot craft!

What You Need to Make this Easy Alien Craft for Kids 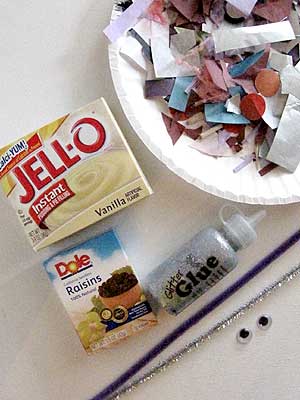 How to Make this Easy Alien Craft for Kids 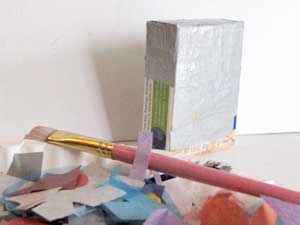 First cover the boxes with the glue and tissue paper. Lay down a thin layer of glue with a paint brush, then lay down the tissue paper, then cover it with another layer of glue. The silver alien used scraps of silver tissue paper, which is very opaque compared to regular tissue paper so I only needed one layer of it. With the purple monster, I had to use about 4 layers of purple tissue paper to ensure you couldn’t see the artwork on the food boxes.

I then added some cut circle scraps for the eyes, and found some other colored triangles or rectangles to make the mouths. These I glued on just like the rest of the tissue paper.

After the decoupage is dry, use a razor blade to cut four tiny x’s into the bottom of the box, and two tiny x’s in the top as shown. This is where you will insert the antennae and legs. 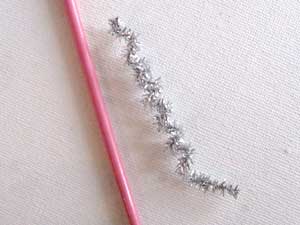 Cut two pieces of pipe cleaner for the antennae, and three to four for the legs. It was a bit easier to make them stand up on their own with more legs.

To make the spiral antennae, wrap the pipe cleaners around a pencil or paint brush, then pull it off.

Make tiny feet by simply bending the pip cleaners into an oval on the ends.

Then simply stick the ends of the pipe cleaners into the tiny slits you cut with the razor blade. 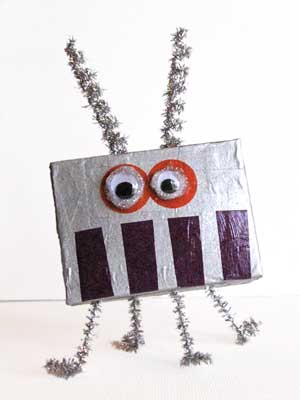 All that’s left to do is glue on your googly eyes. This is optional too, because you could just as easily decoupage or paint on the eyes. I wanted to use glitter glue to make them, well, more alien-y. I also used two different sized eyes, because I thought it was cuter that way!