Did you know that goats were probably the first animal to ever be domesticated by humans? Domestication is when you take a wild animal and you tame it and raise it to be used by humans. Archaeologists have found goat remains at Mesopotamian sites 10,000 years old! These animals have traditionally been used for their meat, milk, dung, and hides. In this mini lesson we’ll learn all about raising goats for kids – well, for children, that is! Because baby goats are also called kids! 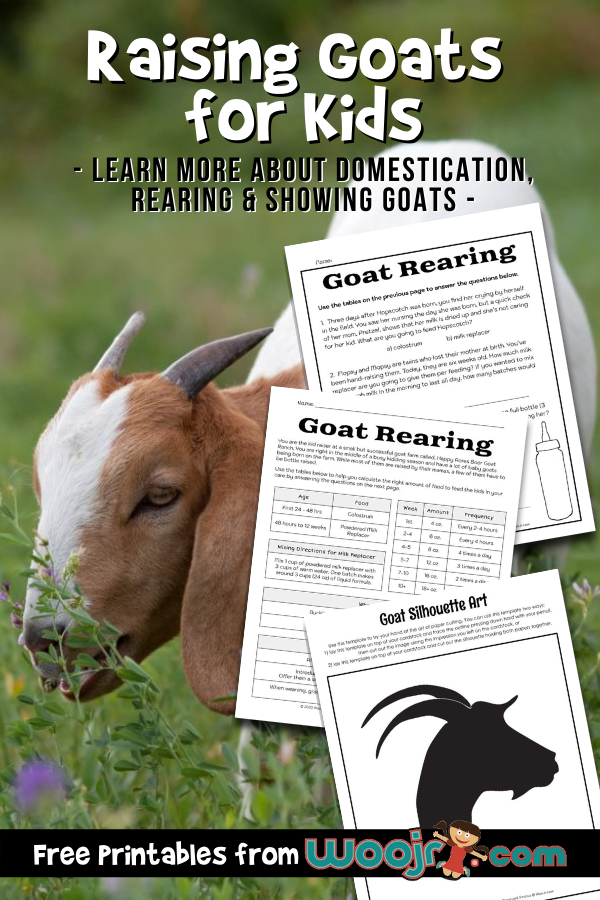 Goats have been bred into more than 210 different breeds. And today, it is estimated that there are 450 million goats worldwide! Some were bred just for their meat, others for their milk. And some breeds were created to be farmed in different climates.

Here in the Americas, goats were first introduced by Christopher Columbus in the 1400s. A century later, English settlers brought more goats to the east coast. But it wasn’t until the 1800s when different breeds were imported, that goat farming really took off.

Today, meat and dairy goats are two of the fastest-growing livestock groups here in the U.S.

Pair this raising goats for kids lesson with our fun farm activity pages! 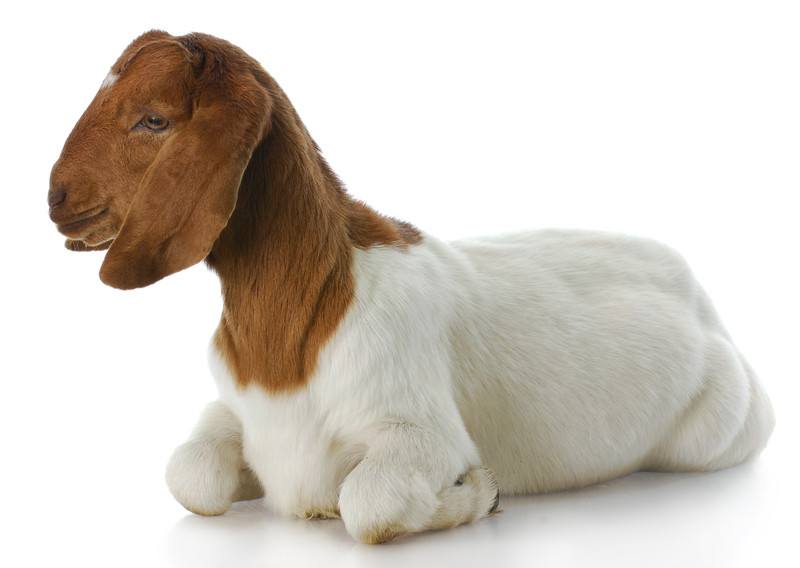 One of the most popular meat goat breeds is the Boer goat. These stocky meaty animals were developed in South African in the early 1900s. They get their name – Boer – from the Afrikaans (Dutch) word for farmer.

Boers grow quickly and are pretty resistant to most diseases. Bucks can live up to 12 years and does can live as long as 20!

People like Boers because they are grazers and will eat grass better than some other goat breeds. But they will also browse on shrubs, so a lot of people buy them to clear out land, especially the understory of a wooded area.

Boer goats are easy to keep and raise. Females are pregnant for five months. Does usually give birth to one kid their first time, but after that, twins are the norm. Triplets are rarer but do happen on a fairly regular basis. 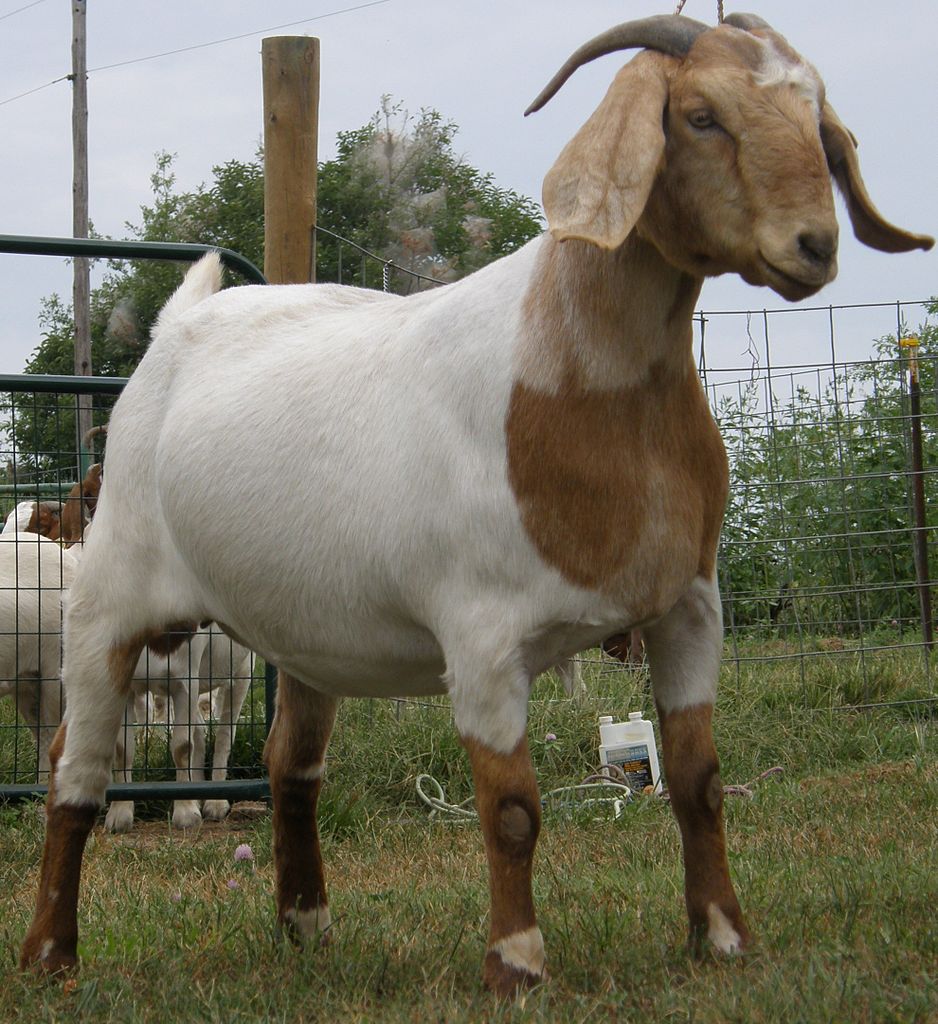 Sometimes people raise Boers to show in competitions for prizes. These goats are usually raised to be bigger. Their owners spend a lot of time gentling and working with the kids as they grow so that they will show well inside a show ring. They train the goats to lead with a chain or collar. Halters are not used.

During the competition, your goat should be nicely groomed. The judge will be looking at the animal’s conformation. That means he’s looking at both the skeletal structure and the muscling and how they combine to form a nice balanced frame and smooth shape. They also want to see how gentle and trained (or easily worked) the animal is.

An experienced judge in a large show may only take 5 seconds to look at your goat, so it is important for you to keep the goat between you and the judge so that you don’t block his or her view of the animal. Depending on the show, you may win awards, trophies, or even a cash prize.

Here are some of our printable goat-related activities.

Art
Silhouette art is the outline of a person, animal, object, or scene and filled with a single color, usually black. Silhouette is an art form that goes back to the beginning of art; examples may be found in prehistoric cave paintings! But the art form didn’t find true popularity until the 1700s when profile portraits were in demand.

Activity:
Try your hand at the art of paper cutting! Goats are a great animal to use for making silhouette art. Different breeds have different body shapes and distinctive features. Print our Goat Silhouette Templates and use them to create your own silhouette art. You’ll need cardstock (black and white pages), a sharp pair of scissors, and a profile image of a goat (optional). If you are really good, you can just draw the outline of a goat on one of the colors of cardstock and then cut it out. Glue the silhouette to the opposite color cardstock to make it really stand out. 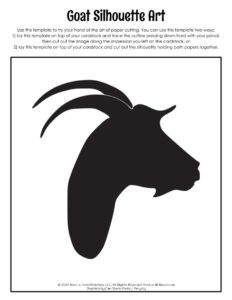 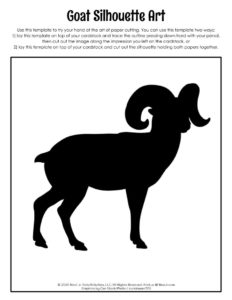 Math
Hand-raised kids require being bottle fed a certain amount daily. The amount depends on both the kid’s age and weight, as well as whether or not it will be a show animal.

Activity: Print our Bottle-Rearing Worksheet and see if you can calculate how much milk replacer each kid is going to get per feeding. 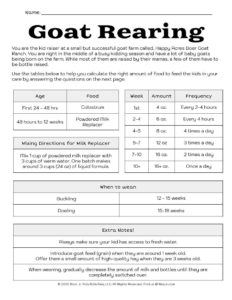 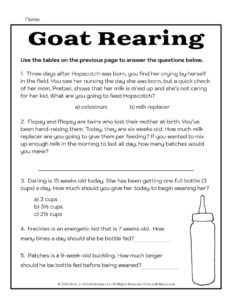 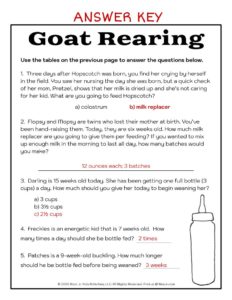