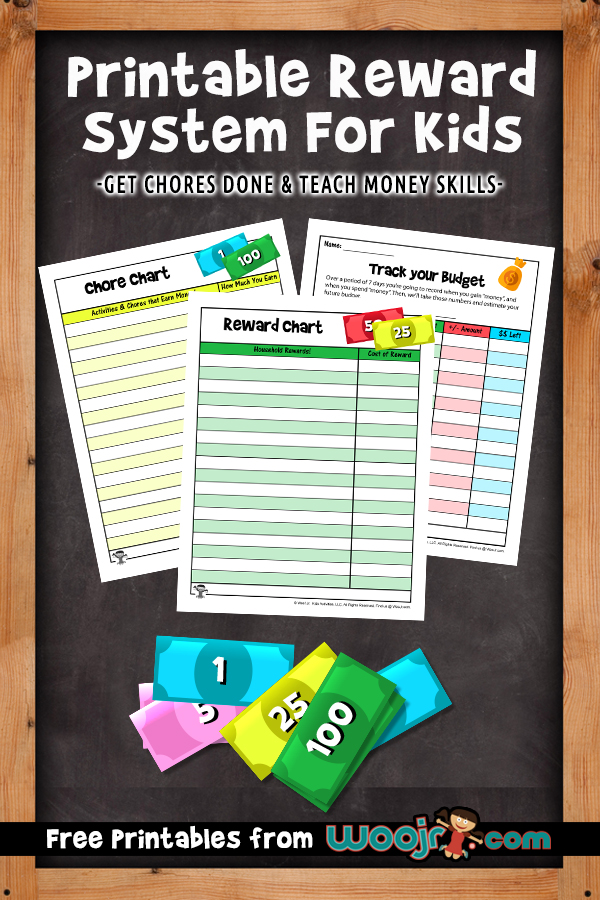 Teach Money Skills & Economics to Kids, And Get Chores Done, Too!

If you’ve ever tried to motivate a child to finish one chore they don’t want to do, let alone a to do list, you know how hard it can be! Now, with more families than ever stuck in quarantine and struggling with homeschooling, and many parents adjusting to working from home, keeping kids busy and on task can be its own full-time job. But this system is helpful even in normal times! That’s why we’ve got this Printable Reward System for Kids to help motivate your kids to accomplish their tasks. Plus, it doubles as a lesson on mathematics, budgeting, and the economy!

The concept is simple: use Monopoly money (or our printable play-pretend money, so there’s no chance of losing game pieces!), and “pay” your kiddos for chores and accomplishments. Scroll down to the bottom of the page for our free money printables for kids. When they’ve saved up enough money they can purchase rewards and activities that they want. 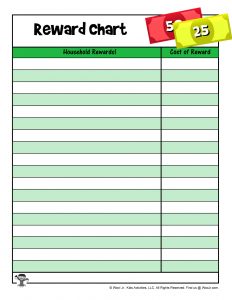 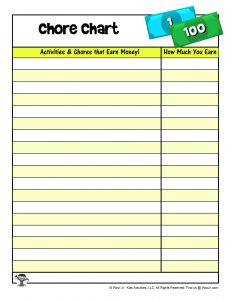 Here are some examples of what you can “pay” for:

And examples of what you can give as rewards:

Bottom line, pick chores for the Chore Chart that work for YOUR house, and rewards for the Reward Chart that YOU feel comfortable giving to your kids. Try to put a couple “expensive” rewards that they will need to save for. The simple act of exchanging their chores, or service, for money, and then exchanging that for rewards is all that’s needed to teach them about a more complicated subject: the economy.

We’ve included a printable version of these instructions for the Printable Reward System for Kids if you want to reference them later. 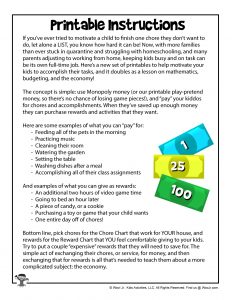 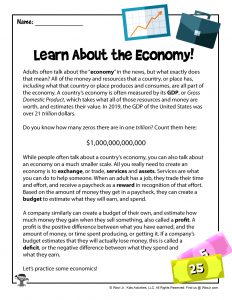 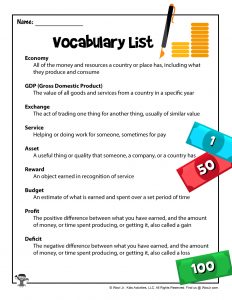 Printable Reward System for Kids: Learn About the Economy

Adults often talk about the “economy” in the news, but what exactly does that mean? All of the money and resources that a country, or place has, including what that country or place produces and consumes, are all part of the economy. A country’s economy is often measured by its GDP, or Gross Domestic Product, which takes what all of those resources and money are worth, and estimates their value. In 2019, the GDP of the United States was over 21 trillion dollars.

Do you know how many zeros there are in one trillion? Count them here:

While people often talk about a country’s economy, you can also talk about an economy on a much smaller scale. All you really need to create an economy is to exchange, or trade, services and assets. Services are what you can do to help someone. When an adult has a job, they trade their time and effort, and receive a paycheck as a reward in recognition of that effort. Based on the amount of money they get in a paycheck, they can create a budget to estimate what they will earn, and spend.

A company similarly can create a budget of their own, and estimate how much money they gain when they sell something, also called a profit. A profit is the positive difference between what you have earned, and the amount of money, or time spent producing, or getting it. If a company’s budget estimates that they will actually lose money, this is called a deficit, or the negative difference between what they spend and what they earn.

Economy – All of the money and resources a country or place has, including what they produce and consume

Exchange – The act of trading one thing for another thing, usually of similar value

Service – Helping or doing work for someone, sometimes for pay

Asset – A useful thing or quality that someone, a company, or a country has

Profit – The positive difference between what you have earned, and the amount of money, or time spent producing, or getting it, also called a gain

Deficit – The negative difference between what you have earned, and the amount of money, or time spent producing, or getting it, also called a loss

Reward – An object earned in recognition of service

The following assignment is a supplementary exercise in practicing budgeting, or keeping a ledger of profit and deficit. Over a period of 7 days your kiddos are going to record when they gain “money”, and when they spend “money”. Then, we’ll take those numbers and estimate their budget, and how long it could take them to earn one of the more expensive rewards on your Reward Chart. 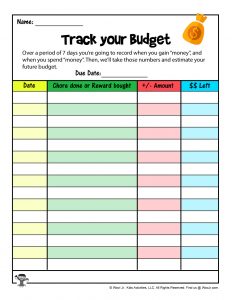 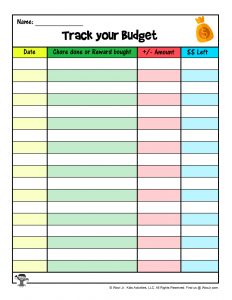 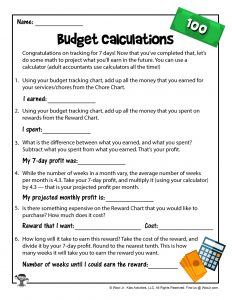 Math Practice with Multiplication and Division

Instructions for the Budget Tracker worksheets:

Over a period of 7 days you’re going to record when you gain “money”, and when you spend “money”. Then, we’ll take those numbers and estimate your future budget.

If you need more room to track your budget, print additional Budget Trackers (or if you’d like to skip the assignment but still encourage tracking, print the “Track Your Budget” page without assignment instructions). After 7 days, give your participating children at or above Grade 3 the Budget Calculations worksheet.

Congratulations on tracking for 7 days! Now that you’ve completed that, let’s do some math to project what you’ll earn in the future. You can use a calculator (adult accountants use calculators all the time!)

1. Using your budget tracking chart, add up all the money that you earned for your services/chores from the Chore Chart.

2. Using your budget tracking chart, add up all the money that you spent on rewards from the Reward Chart.

5. Is there something expensive on the Reward Chart that you would like to purchase? How much does it cost?

6. How long will it take to earn this reward? Take the cost of the reward, and divide it by your 7-day profit. Round to the nearest tenth. This is how many weeks it will take you to earn the reward you want.Number of weeks until I could earn the reward: ____________

Download our Planning & Organizing Bundle filled with 184 pages of printable schedules, week-at-a-glance pages, goal setting worksheets and so much more!

We suggest using these easy printable money sheets for all of your Printable Reward System for Kids needs! Because they aren’t parts of existing board games in your home (like Monopoly), you won’t have to worry about losing them and ruining the games you’ve spent real money on. Plus, if you ever need more you can come back here & print additional money — this free set of printable game money might as well grow on trees! 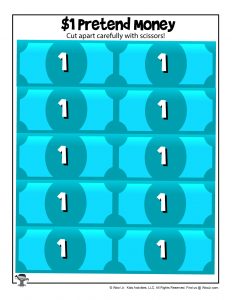 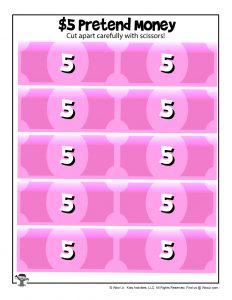 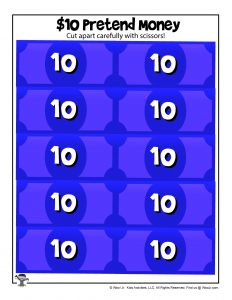 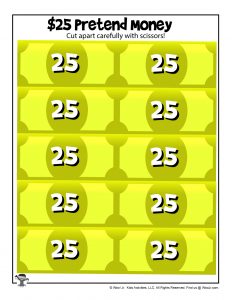 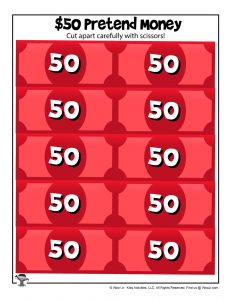 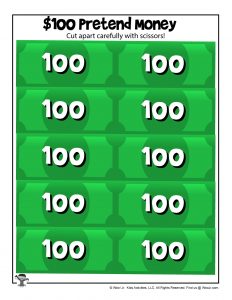 If you’re looking for more free printable games, we’ve got you covered!

View all articles by Lilia Garvin