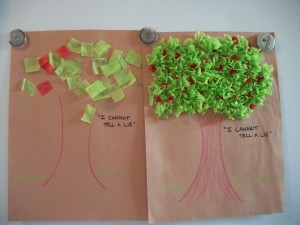 President George Washington is immortalized on our refrigerator this Presidents Day

I thought Presidents Day offered a great opportunity to start introducing Dot to some of the best lessons of American history.  I was looking for something to teach her about either George Washington or Abraham Lincoln, as they’re the two most often recognized on this holiday in February.  The angle I went with, however is probably actually only a myth and never really happened.  Oh, well.  I think “don’t lie” is a good lesson, so I’m willing to perpetuate the myth if it gets the moral across.

First I told Dot about how George Washington owned up to his behavior.  Then I realized she doesn’t get what a “lie” is.  We’ve been working on it all day, and I’m not entirely sure that I didn’t just teach her how to be dishonest.  Time will tell.  😉

To make this tissue paper cherry tree, you will need: 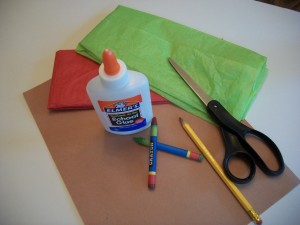 Cut the tissue paper into small squares.  (Mine were not exact.) 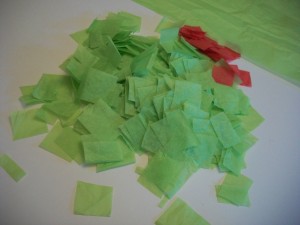 You need lots of green and just a bit of red. 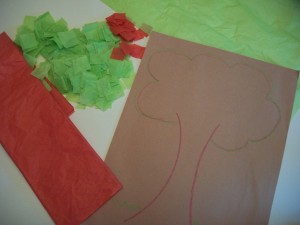 Draw the outline of a tree on your construction paper. 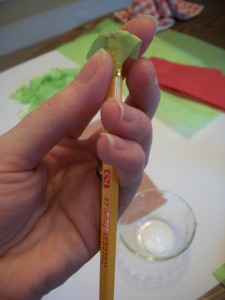 Wrap a tissue square around the eraser end of your pencil and dip it in glue. 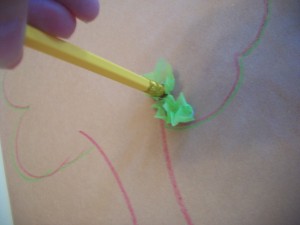 Stick the green tissue paper where the leaves would go. 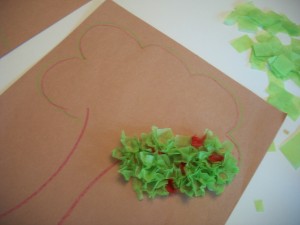 Occasionally use a red square as the cherries on your tree. 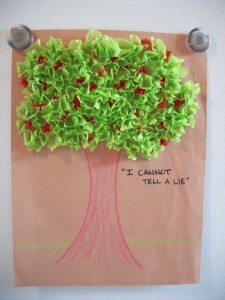 Fill in the entire space. I added “I cannot tell a lie” as a reminder of the lesson.

What I Learned the Hard Way: The squares I cut were pretty small, and Dot just couldn’t hold them around the end of the pencil to affix them to the tree.  So, we did an easier version for her, where I spread some glue around on the top of the tree, and she just added tissue paper squares.  Here’s the preschool version: 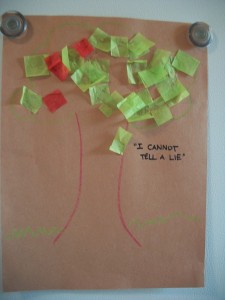 I cannot tell a lie, the original project was too hard for my three-year-old.