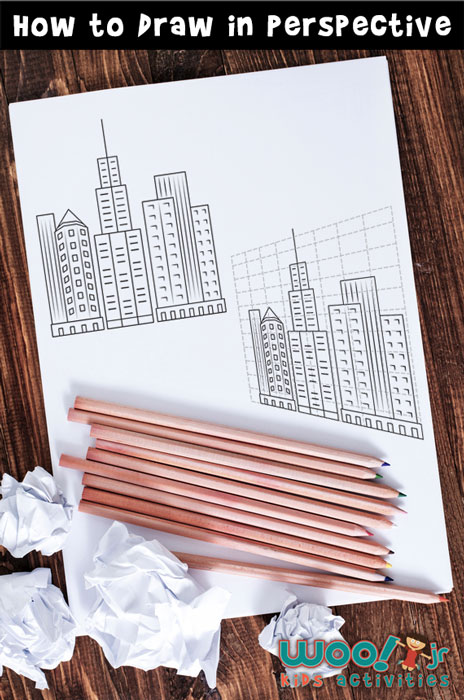 Most people know that 3-D art makes things look more real. With some basic training and direction, it’s quite easy to do! The language of visual art speaks to us with images but words for art are very important too. Learning to draw illusions takes knowledge of words. Humans like viewing large pictures on large frames or screens that take up our peripheral vision (what we can see to the farthest edges of our vision) or even in virtual reality.  Things like height and width can be measured from top to bottom, side to side and are two dimensional. Depth describes the third dimension (3-D). The third dimension can also be measured like distance is measured. Depth can seem infinite as if it vanishes. The term vanishing point is one place or two places that must be on the horizon. The vanishing point or points are for the tops and bottoms of all objects to lead to or converge at. 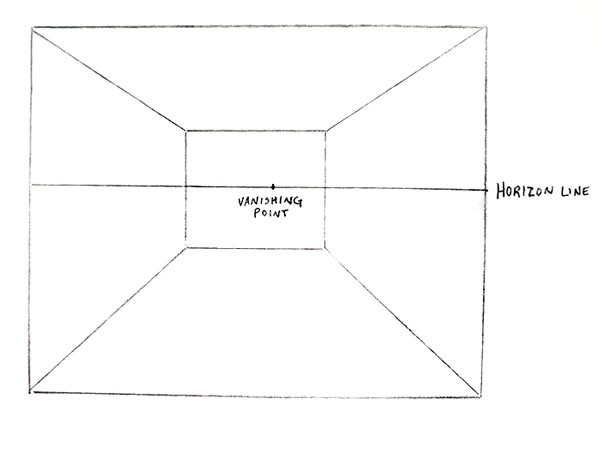 Imagine stepping into a flat picture or a flat scene and moving around in it. Space is the word for the place that is seen in the picture. Depth can vary within that space. It can be deep space or shallow space within the picture. The illusion of a place usually requires a surface, ground or plane. A plane can be drawn with a line. The line that separates surface and sky is the horizon line. Our eye as a viewer of art looks up and down and from side to side. The horizon line can be placed high or low in a picture but is most often also thought of as the Eye Level Line, and it is parallel to the top or bottom of the frame or screen for viewers to feel horizontal (stable not sloping) balance. If it is low there may be more “sky”. If it is high there is more surface to place things like forms. Form is a three-dimensional thing. A form is based on a shape, like a square = cube, triangle = pyramid, circle = sphere. Or other shapes based on combinations of these, such as circles at the ends of cylinders and at the bottom of a cone.

First, try to think like an artist. Plan carefully what you would like to draw. You might try to draw a city street scene like what you see that is in front of your car. Or you might take a walk on a path, sidewalk, down an alley or along a gravel road. You may think about a vacation place where buildings overlook the beach or a pier extends out into the ocean. Whatever you choose is a view you have to remember or share. You might be drawing from memory or from a photograph. You can always transfer what is in a photograph to something larger like a huge canvas. The key is DRAWING with lines. The concept of ONE POINT perspective is a centered place such as these where the viewer’s eye focuses. 1. Near the center of the paper PLAN and place your ruler to draw a horizontal line parallel to the top and bottom of the paper.  2. Draw that HORIZON LINE very lightly. 3. Place a dot (vanishing point) somewhere on that line. 4. Draw very light pressure lines radiating and converging to the vanishing point. You’ve now drawn a One Point Perspective Grid, like the one below. 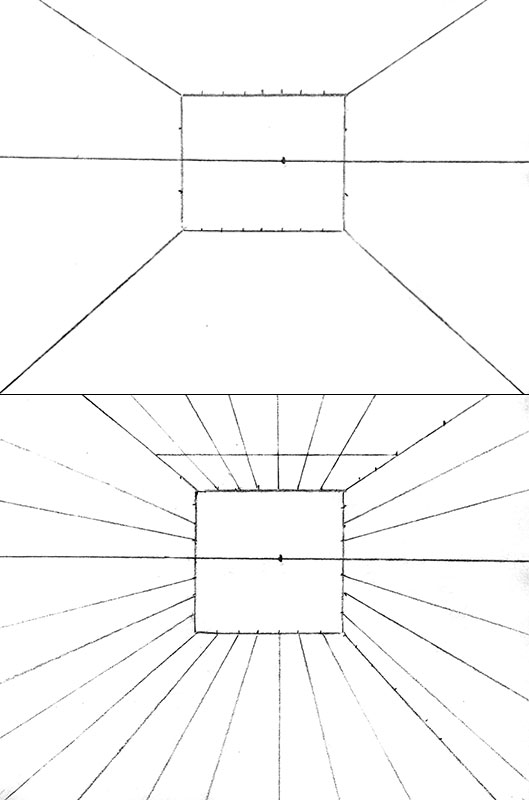 You are now ready to draw objects onto that illusion of 3 dimensional space. If the objects are buildings, then all of the details of the structure are drawn doors, windows, shutters, steps, flower boxes etc. 5. Draw the tops and bottoms of every detail so that those lines recede (or go back) in space to the Vanishing Point. 6. All of the vertical lines in your drawing must be parallel to the right and left sides of the paper. An example of one point perspective drawing can be seen in Vincent Van Gogh’s The Bedroom: 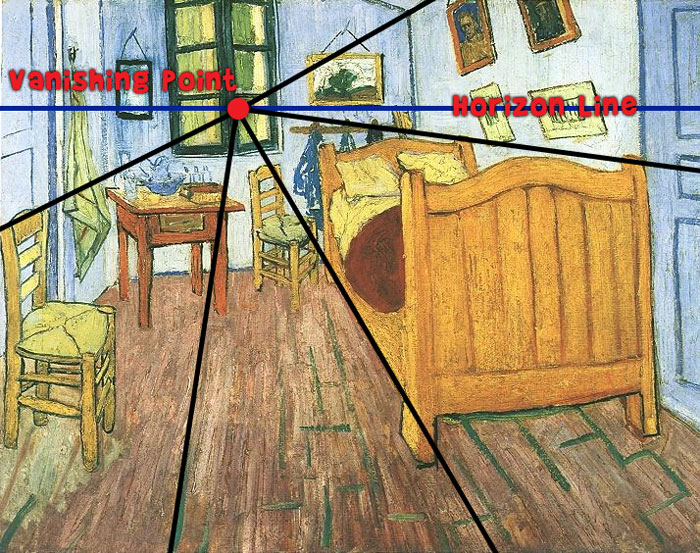 Two point perspective uses the same horizon line but two vanishing points are drawn on it. 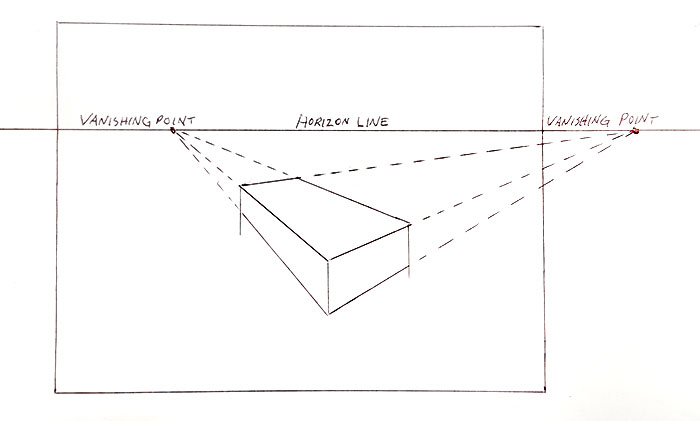 In this type of scene, objects might be tall in the center and get smaller toward the outsides of the picture. Or, the image might be an interior scene of two walls in a room. Regardless, the steps are the same. 1. Near the center of the paper PLAN and place your ruler to draw a horizontal line parallel to the top and bottom of the paper. Draw that Horizon Line very lightly. 2. Place TWO dots (vanishing points) somewhere on that line. The two points must be on the line but can be outside of the sides of the picture area, such as the vanishing point on the right in the example above. 3. Draw very light pressure lines radiating and converging to the vanishing point. You are now ready to draw objects onto that illusion of 3 dimensional space. If the objects are buildings, then all of the details of the structure are drawn along the dotted grid lines you’ve created with your Two Point Perspective Grid. 4. Draw the tops and bottoms of every detail so that those lines recede (or go back) in space to the Vanishing Point. 5. Again, all of the vertical lines in the picture must be parallel to the right and left sides of your paper. An example of two point perspective drawing can be seen in Vincent Van Gogh’s The Yellow House:

How to Draw with Two Point Perspective: Van Gogh’s The Yellow House

We asked our local art teacher to write this tutorial as a part of publishing our latest book, The Drawing Book for Kids: 365 Daily Things to Draw, Step by Step. The book spent nearly its entire first month as the #1 new release in the Children’s Drawing Books category AND the Arts & Photography Study & Teaching category! Curious to learn more? Check out a few samples with our How to Draw 12 Ocean Animals book excerpt. Or, click the image below to buy the book on Amazon!