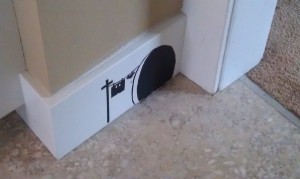 The right way to paint on the walls with your kids!

I may have mentioned that I’m kind of a Pinterest junkie.  A friend of mine introduced me to it several months ago, and one of the first things I ever re-pinned was an awesome decal she had found online.  I’ve long been wanting to put it on my own wall, but I thought it would be really cool to turn it into more of an arts and crafts project.  It was certainly a lot less expensive than buying the awesome original, but it did require some work on my part.  My painting ability is not compatible with my perfectionist tendencies, so this took longer than I would have expected.

Of course, another friend of mine saw what I had done and turned around and just drew one on her wall with a Sharpie in about 20 minutes, and it looked great.  Go figure.

What you need to paint a mouse hole on the wall: 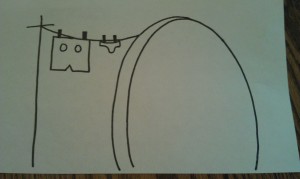 Draw the picture onto a piece of paper. You can hold it up to the wall to get just the right size for your molding or other space.  (I’m loving the fact that everyone’s favorite mouse apparently prefers bikini briefs.) 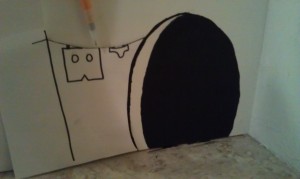 Cut out the template and tape it to the wall, tracing around the basic shape with a pencil. This will give you some guidelines to follow as you do the different pieces. 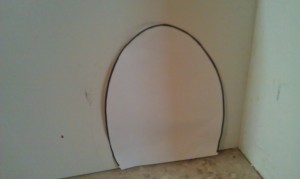 Cut the various shapes out of your paper and apply them one by one by taping them to the wall and tracing around them. 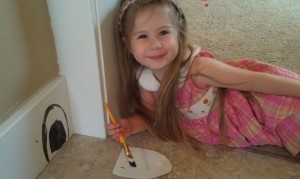 I’m pretty sure my kiddo thought we’d moved to Opposite World when she found out I was going to let her paint on the wall! 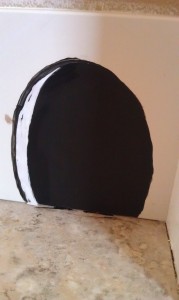 Once the hole was painted, we taped on the shading effect and traced around it with a thin black line. 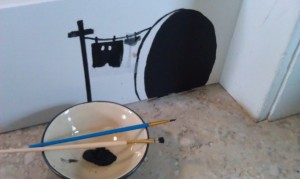 I used clear tape around the shorts and along the edges of the clothesline pole to make my lines a little straighter.  After painting, I removed the tape for a much crisper line than my shaky hand would allow me to make. 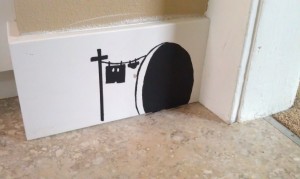 Totally stinking cute, right? Mine’s not as perfect as the decal, but it also cost $0.59 to make!