As part of her recent birthday gift, I’ve been redecorating Dot’s room, and this button monogram craft is front and center.  With a name like that, you can imagine that polka dots were high on the list of themes.  You’ll be seeing plenty of polka dot crafts here as I keep working to transform her bare room into something awesome.  This was one of our first projects for the room, and the buttons have become a unifying factor in the various parts and pieces of the decor. 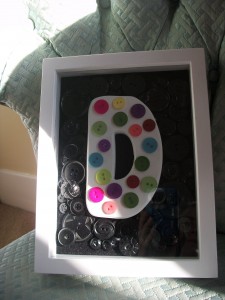 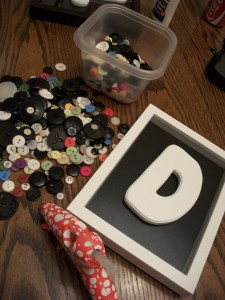 How to make a button monogram

Start by removing the back from the shadow box.  Lay it flat and then hot glue your letter into the center of it. 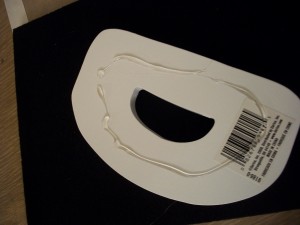 Make sure your letter isn’t too thick, or you won’t be able to get the glass back on your shadow box.

Once you’ve glued your letter in place, start adding buttons all around it.  To fill in the gaps, it’s fine to glue buttons on top of others. 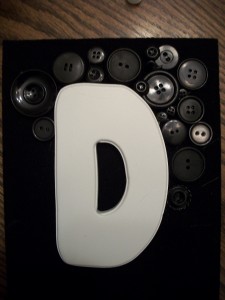 Different sized buttons give your monogram more dimension and character.

Make sure not to glue buttons too close to the edges, or your backing won’t fit back into the shadow box frame.  (Trust me.) 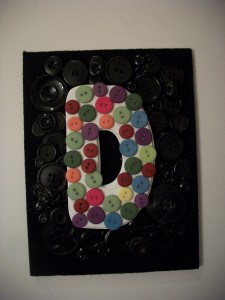 Glue contrasting buttons on top of the letter.

I started out intending to cover the whole letter, but ended up spreading them out to be more like polka dots. 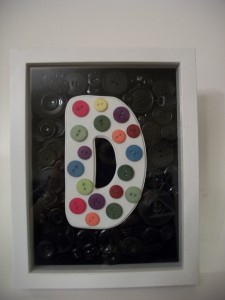 Place back into the shadow box and your monogram craft is done!

What I Learned the Hard Way: A lot!  The first lesson was that the letter needs to be pretty thin (in depth), or else you can’t get the glass back on.  Then I discovered that it’s harder than you might think to cover the entire letter.  I did another one with black buttons in the back and white/clear buttons on the letter, and it just didn’t look nearly as cute as I’d hoped.  Finally, I wasn’t able to stack the buttons two-deep on top of the letter, as I originally planned.  Still, I think it turned out really cute, and the little ones can totally help if you use white glue instead of hot glue.