Thanks to Pinterest, I started becoming enamoured with the idea of melting cheap plastic pony beads into suncatchers. Since Halloween is my one of my favorite holidays, I wanted to come up with a suncatcher craft project for October. I told my then 9 year old daughter about it, and she was beyond excited to try it. In fact, since we’ve done this project, she’s done another one almost completely by herself.

Melting pony beads is obviously something that needs adult supervision. You can do it in your oven, but I saw a tip somewhere that this method makes for a very unpleasant-smelling kitchen. I’m not a fan of making my kids breathe plastic fumes, so we did this project and melted them outside on our gas grill! It worked perfectly! 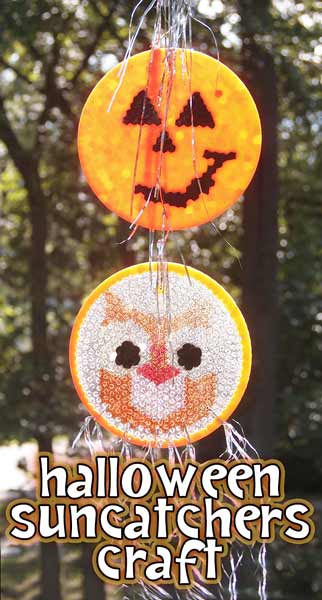 What You Need to Make This Halloween Suncatcher Craft

How to Make Halloween Suncatchers

This project can be as simple or as complex as you want it to be. I wanted to push my creative skills to make the owl suncatcher – my daughter wasn’t so ambitious and wanted to make a pumpkin face. For an even easier project, you could simply dump black and orange beads into a pan and melt them as they landed! We didn’t take pictures of the ones we did like that, but they also turned out well.

It takes longer than you think it would to arrange the beads into your pans if you want to create an image. You can see how we put together the pumpkin face in this picture:

Notice that we made sure that all the beads were not on their sides and laying in the same direction? This was not necessary, as we found out after the beads had melted. Plus it was tedious – so you can simply arrange your beads in your pans and need not worry about whether they lay on their sides or with the bead hole down.

The owl took a while, but that was also made (MUCH)  longer by the unnecessary bead turning: 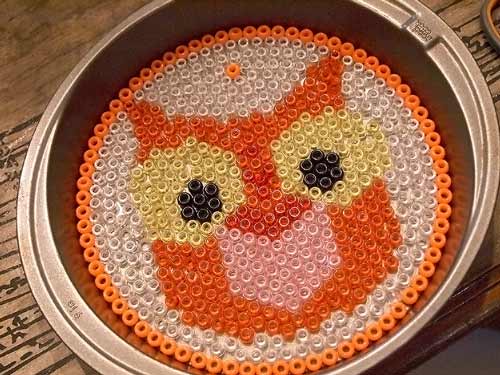 I wanted to create a color chart to replicate the owl, but I realized that since not everyone has the same size pan, nor will find the same beads we found, that an exact chart would only work for a small portion of our readers. So I’ve created a printable ‘guide’ if you will, which gives you a general idea of where to place the colors, but is definitely NOT an exact placement chart:

Once you have your baking pans loaded up with beads, pre-heat your grill and get it to a regular cooking temperature. The temp isn’t an exact science, we just put our grill on ‘medium’.

Have an adult CAREFULLY place your pans onto the cooking grates, don’t forget the potholders! Plus, too much movement will ruin your designs, so don’t jostle them while moving them.

I checked our suncatchers after 10 minutes and at 15 minutes, but found that 20 minutes was about right for these beads. This is again not an exact science, because we found that the opaque beads melted at a different rate than the clear colored beads did. So you’ll just have to keep an eye on them and simply take them off the grill when they are fully melted.

Allow them to cool someplace where little hands cannot get to them. You’ll find that as the plastic cools, it shrinks just enough to pop itself right out of the pan. If by some reason you have any plastic residue on your pan, it is easily scraped off with something like a spatula or a credit card if you don’t want to scratch the surface.

Once they are completely cooled off (which doesn’t take very long at all – about 20 minutes), you can use a drill to make holes in the top and/or bottom of the circles to hang them outside: 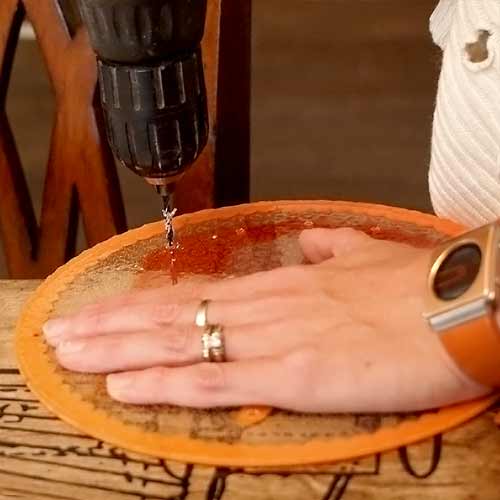 Drilling holes in the suncatchers to hang them.

Then hang them outside and enjoy ’em! 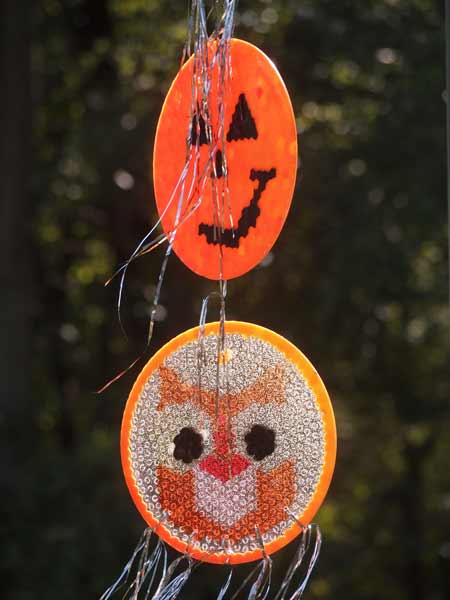