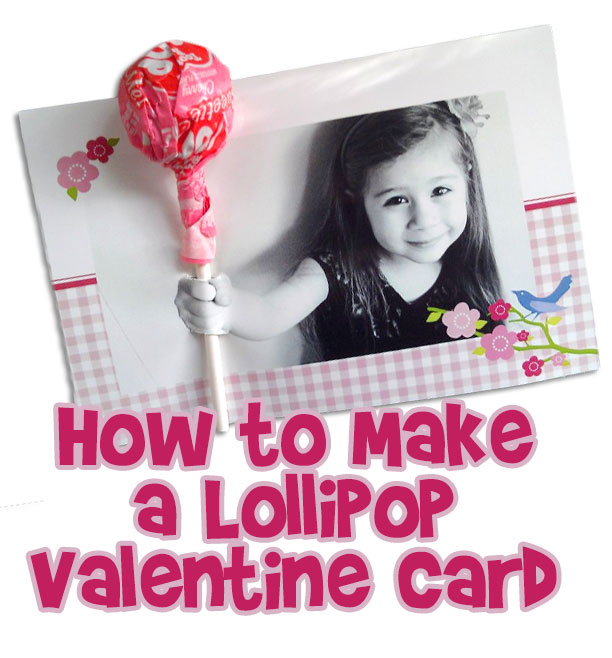 I waited a whole year to make these Valentines with my daughter after I saw them on Pinterest right after the holiday.  They made absolutely adorable Valentines, but you could so easily use them as invitations or thank-you cards, too.  Living in today’s tech world, they were also way, way, way easier than they should have been!  Seriously, if you count the time I spent going to pick up the prints and buy the candy, it STILL probably only took an hour to make 30.

Oooooh, you could totally make this a Christmas craft by using a candy cane instead of a sucker!

What You Need to Make Lollipop Valentines or Cards 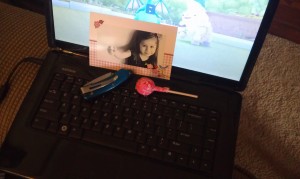 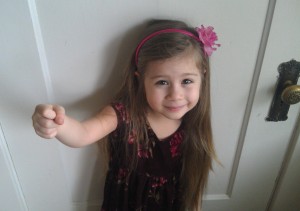 Find a nice uncluttered background and take a picture of your child holding his or her arm up and to the side, as if there was a bunch of balloons in the kid’s hand. It’s a good idea to leave a little extra space on that side as if the balloons were actually in the picture. 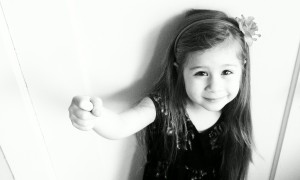 I took the picture with my phone and just went ahead and used the simple effects to crop it a bit, change the contrast, and make it black and white. Once I liked it, I transferred it over to my computer.

From here, I uploaded it to the Walgreen’s web site because I happen to have an account there and they do one-hour developing.  I believe you can do the same with Costco, and there are probably plenty of other places.  The site allowed me to add a border and to print the number of copies I wanted.  I was hoping to be able to add a phrase, but that wasn’t an option with the really simple tools I was using.  Obviously, you could add whatever you wanted with Photoshop or other software before you uploaded it for printing, though. 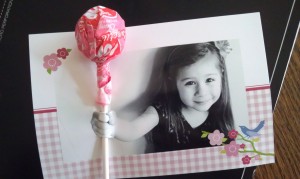 Use your sharp blade to cut slits in the photo at the top and bottom of the child’s hand and then slide the lollipop stick through so it looks like your kiddo is offering it right off the picture!

What I Learned the Hard Way:

You want to make sure that your child is holding his or her hand out to the side, because if not, the lollipop will end up right in front of the kid’s face.  I also think that the effect is better when you take the picture from slightly above the child.