I know that S’mores are typically a summer treat, but while we are trapped inside during this crazy winter polar vortex, I’ve been passing the time by doing lots of cooking. The fact that I got a Kitchenaid mixer for Christmas might have a little to do with this, too! (I’ve seriously used the thing 30+ times in the last two weeks!!)

One of the things I’ve wanted to make forever is homemade marshmallows – something that requires a lot of whipping. So marshmallows are something that you either make with a stand mixer, or make to get a really good arm workout in the kitchen. And the other thing I’ve wanted to make forever is S’mores from scratch. As in, homemade graham crackers and homemade marshmallows. I posted this recipe for graham crackers last year, and I still stand by this phenomenal recipe. These are incredibly healthy and delicious snacks for kids, and they disappear in one afternoon from my kitchen when I make them. And I used this really easy Food Network marshmallows recipe, which also turned out really well.

But when it came to making s’mores, I always have a problem that I can’t overcome – my son doesn’t like chocolate. (Yes, he is really my kid!) So when I saw a key lime s’mores recipe on Pinterest, I realized it would be incredibly easy to make these with lemon curd instead. If you’ve never tried lemon curd, I wouldn’t blame you. It’s a really gross sounding name, isn’t it? Sounds like some sort of horrendous milky-citrus curdled mess. But it’s not. Lemon curd is just like the lemon in lemon meringue pie, and is available in nearly every grocery store with the jellies and jams. And it is soooooooo good. 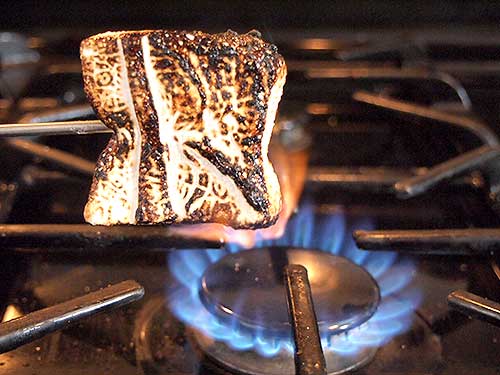 We toasted ours over a stove burner, something I don’t recommend kids do unless supervised. And don’t do the very, very stupid thing I did and try to lick the melted marshmallow from the scorching hot metal fork. Really, how stupid was that?!

Of course, winter will be over someday (though this polar vortex is making me doubt this), and you can toast your marshmallows the old fashioned way over a campfire.  Or you can even go the lazy way and pop them in the microwave for 30 seconds.

Anyway, I think you can handle toasting a marshmallow. All that’s left to do is slather on some lemon curd straight from the jar, sandwich it all together, and take a heavenly bite. Warning: these are surprisingly filling when made from scratch. One is all you need!