Our planet has three main types of forests: tropical, boreal, and temperate forests. And these three types of forest can be further broken down into different subgroups. One of those is rainforests. This mini-lesson for children ages 9 to 12 years old will explore learning about rainforests and biodiversity. 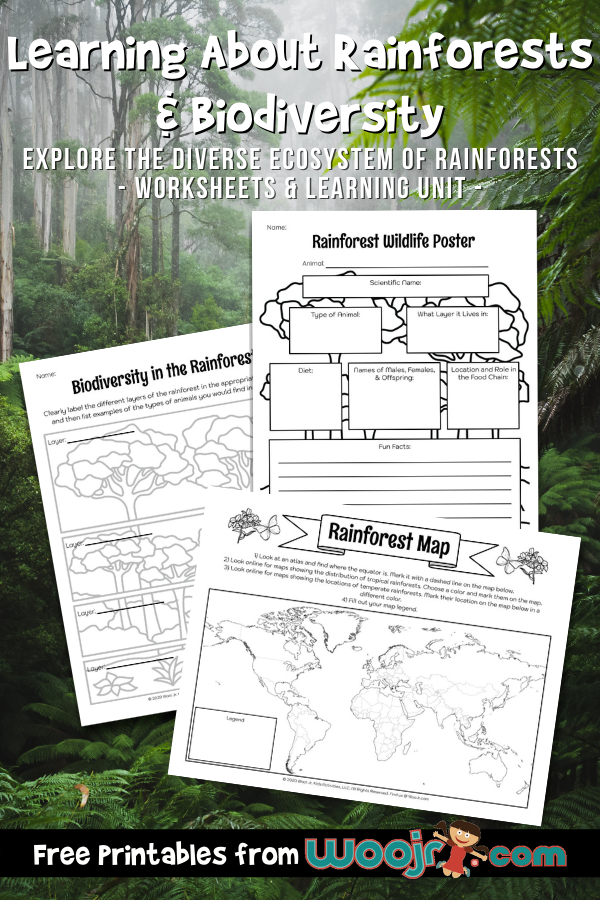 Learning About Rainforests: What are they?

What do you think of when you picture a rainforest in your mind? You might think of a hot, steamy jungle full of amazing – and sometimes dangerous – animals. You’d be right!

Rainforests are one of the oldest living ecosystems on the planet. An ecosystem is a living community of interacting organisms and their physical environment. A few examples of ecosystems are deserts, savannas, and tundras.

There are five main characteristics that separate a rainforest from other types of forests: 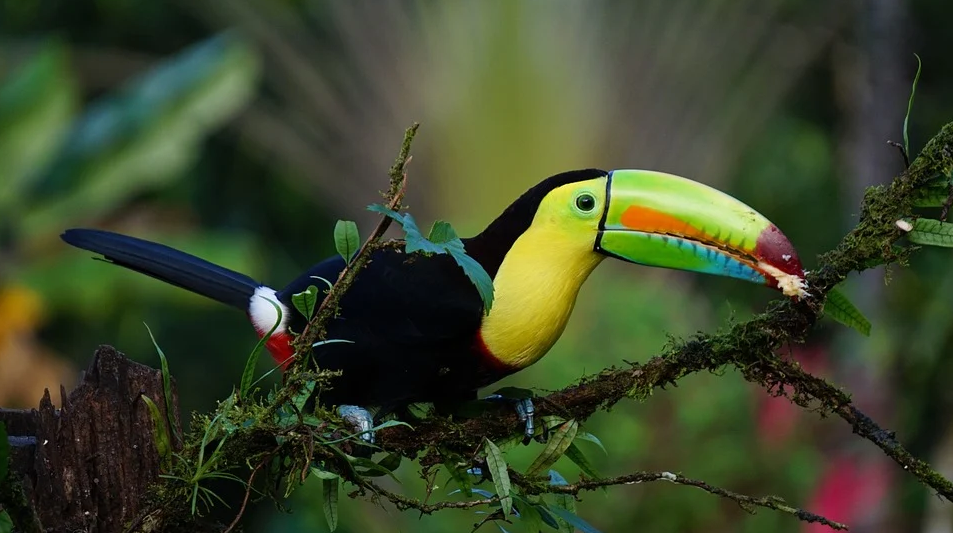 Biodiversity means the variety of living organisms in a habitat or ecosystem. More than half the world’s plant and animal species live in rainforests. However, this type of forest covers less than 6% of the Earth’s surface. That means a LOT of different species live in this type of ecosystem!

This includes plants. In fact, rainforests are THICK with vegetation. All these plants absorb a lot of the nutrients out of the soil, leaving it a poor substrate for growing anything else.

Trees, obviously, are abundant. They are mostly tall evergreens and where their branches and leaves come together is called the canopy. These massive trees form the basis of the rainforest’s layers. 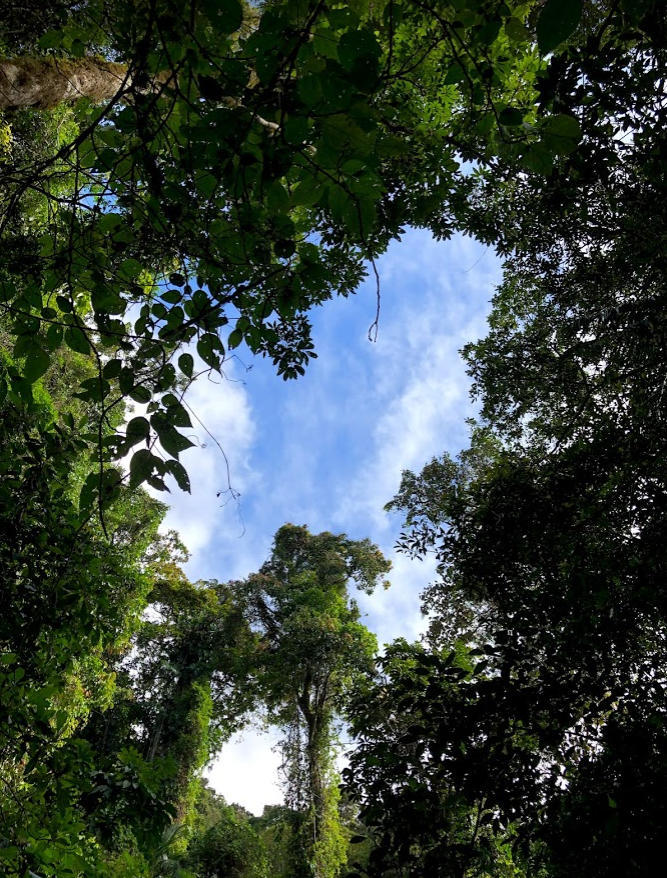 The layers of a rainforest

Rainforests are made up of a series of layers. And different types of animals live in different layers. There are five layers all together.

The emergent layer is at the top. It has giant trees that grow up to 200 feet or higher. Also known as the overstory, these trees poke up 20 to 100 feet above the canopy. Birds, bats, and butterflies are the main animals that can be found in this layer.

The canopy is the next layer. It has a thick layer of leaves and branches. It blocks sunlight (and sometimes water!) from reaching the layers below it. There’s not a lot of wind to blow the trees’ seeds around either, so the trees produce a lot of delicious fruits to attract animals. When an animal eats the fruit, the seeds fall to the ground to produce new plants. This is how the trees in this layer reproduce. And this is also why most of the animals in the rainforest live in this layer, including monkeys, parrots, and sloths.

The next layer is called the understory. It is made up of smaller, shorter trees that grow in loose patches. They aren’t tightly woven together like the canopy. But they have large leaves that absorb what little light that filters down. Jaguars, lizards, and snakes live in the understory.

Next is the shrub layer. Some places lump this layer in with the understory or the forest floor, but it is unique in the wildlife that lives within it. It is very humid in this layer, so amphibians like poison dart frogs prefer to live here where their skin can stay nice and moist.

And finally, we have the forest floor. This is the darkest layer of the rainforest. Very little vegetation grows here because of the low light, and any leaves or branches that fall to the ground quickly decompose. So, naturally, decomposers such as insects and fungi are abundant. Their predators – armadillos and anteaters – live here, too, and are always rooting around for a quick meal. 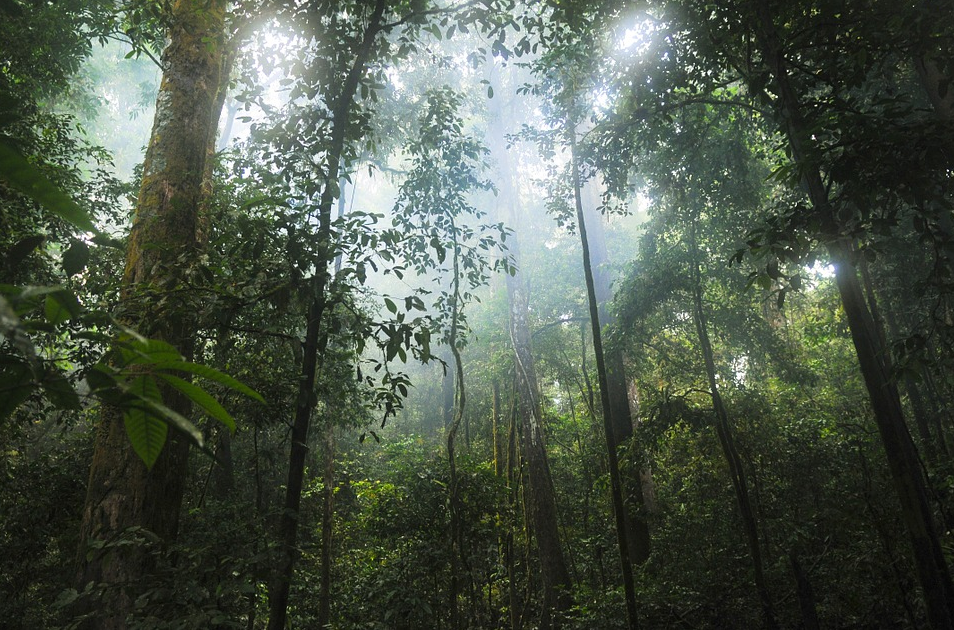 What we’ve described above is a typical tropical forest. The Amazon is a good example. These hot steamy jungles tend to be found around the equator where the temperature stays warm and moist. But did you know that rainforests are found on every continent (except Antarctica – brrrr!)?

There are actually two types of rainforest: the tropical evergreen rainforest (mentioned above) and the other is temperate rainforests. They are found farther north and south, usually along coastal areas. The temperature is cooler, but they still experience a large amount of rain. Temperate rainforests exist here in the United States. Olympic National Park on the Olympic Peninsula of the Pacific Northwest is an example. 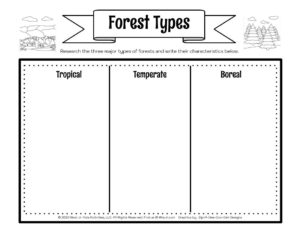 Here are some of our printable resources for helping your child learn more about rainforests.

Tropical and temperate rainforests exist in different locations on Earth. Their proximity to the equator plays a major role in one of the characteristics for each one: temperature!

Activity: Print our Rainforest Mapping Activity and have your students use an atlas or online resource to do three things.

First, have them mark the equator on their map using a dashed line.

Second, have them find the locations of tropical rainforests and mark them on the map in a single color.

Third, have them find the locations of temperate rainforests and mark them on the map in a different color.

Last, have them create a legend for their map.

Here are some great online resources to use for research: 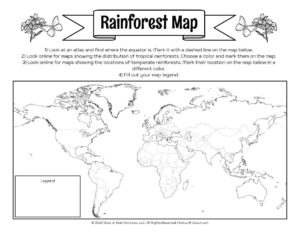 Rainforests are the most biodiverse ecosystem on the planet. Scientists estimate that more than half the world’s species live inside them.

Activity #1: Print our Biodiversity Activity Page and have your students clearly label the different layers of the rainforest. Then ask your students to list examples of the types of animals found in each level. They may need to do some research of rainforest animals. 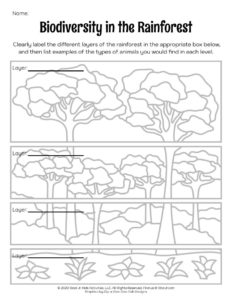 Activity #2: Print our Rainforest Wildlife Posters and have your students research a specific species living in a rainforest. Ask them to complete the poster by filling out the information boxes. There is a version with writing prompts and another version that is blank. 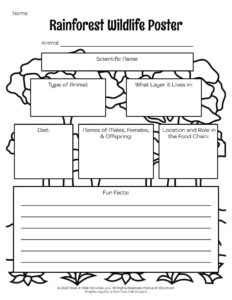 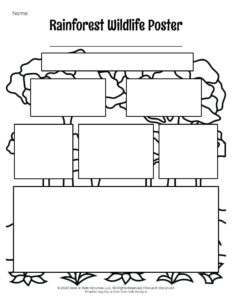 A few great online resources for researching for both these activities are: