The Aztecs were one of three civilizations that dominated Mesoamerica before the arrival of the Spanish. At the height of their empire, the Aztec Empire controlled the central Valley of Mexico south to modern day Guatemala. Learn about the Aztec Empire in this mini lesson that explores the Aztec culture through descriptions and fun activities. 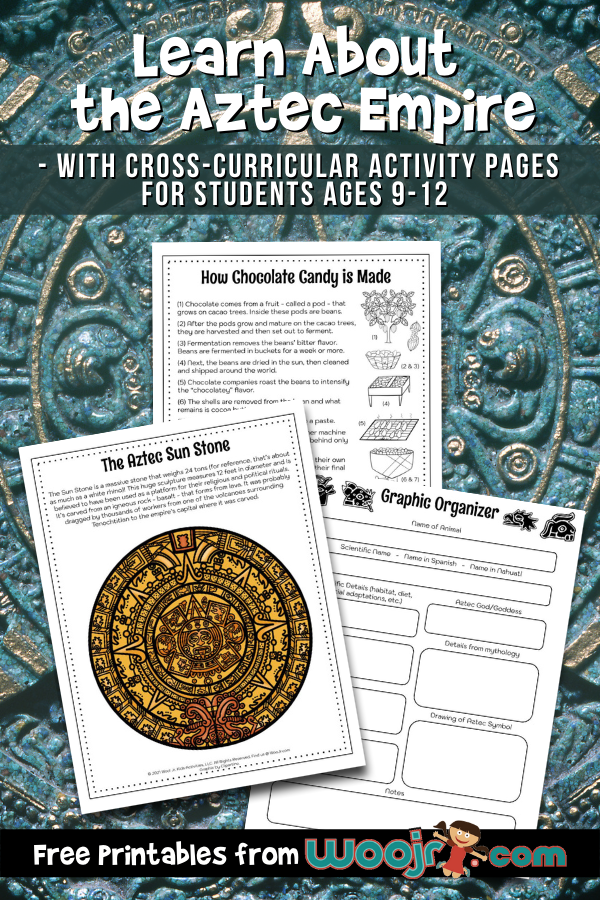 The Aztec empire was essentially a group of wandering tribes who came together to settle and rule over central Mexico. They are known for their fierce military, which they used to conquer neighboring tribes and expand their territory.

At its peak, this empire was made up of approximately 50 city-states that it ruled through alliances. A city-state is an independent city that rules over its surrounding territory. The Aztecs allowed these conquered groups to rule themselves in exchange for a tribute that they paid to the empire. In total, the Aztec civilization ruled for more than 100 years, until the arrival of the Spanish. 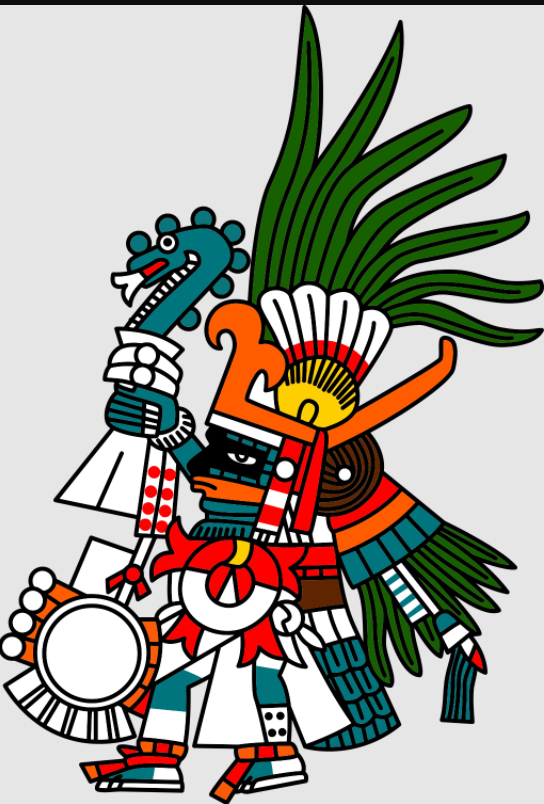 The capital of the Aztec empire was Tenochtitlan, which is the site of modern day Mexico City. Legend has it that Huitzilopochtli – the Aztec sun god – told his people to settle and build their city one the site where an eagle was eating a snake while perched on a cactus. And that’s exactly what they did when they saw this very thing happening on what was an island in what was then Lake Texcoco.

Tenochtitlan grew to become the largest and most powerful city in Mesoamerica before the arrival of the Spanish. The Aztecs built palaces, pyramids, and temples, many of which are still visible today. It was one of the largest cities on the planet with more than double the population of Rome, Paris, and London at the time. But much of it was destroyed in 1521 when the Spanish conquistador Hernan Cortés attacked the capital with his army and the warriors of some of the conquered city-states. Afterward, Cortés used the site to begin building what would become the capital of Mexico today.

The Aztecs were masters of design. In addition to architecture, they also designed a series of waterways to manipulate the surrounding salt and freshwater to prevent the two from mixing together.

Their ingenuity also led to chinampas, or a series of artificial islands that are often referred to as “floating gardens.” They used them to grow crops, create fertilizer, and provide drainage. Records indicate that they produced as many as seven harvests per year. The crops included maize, beans, squash, amaranth, tomatoes, chili peppers, and flowers. 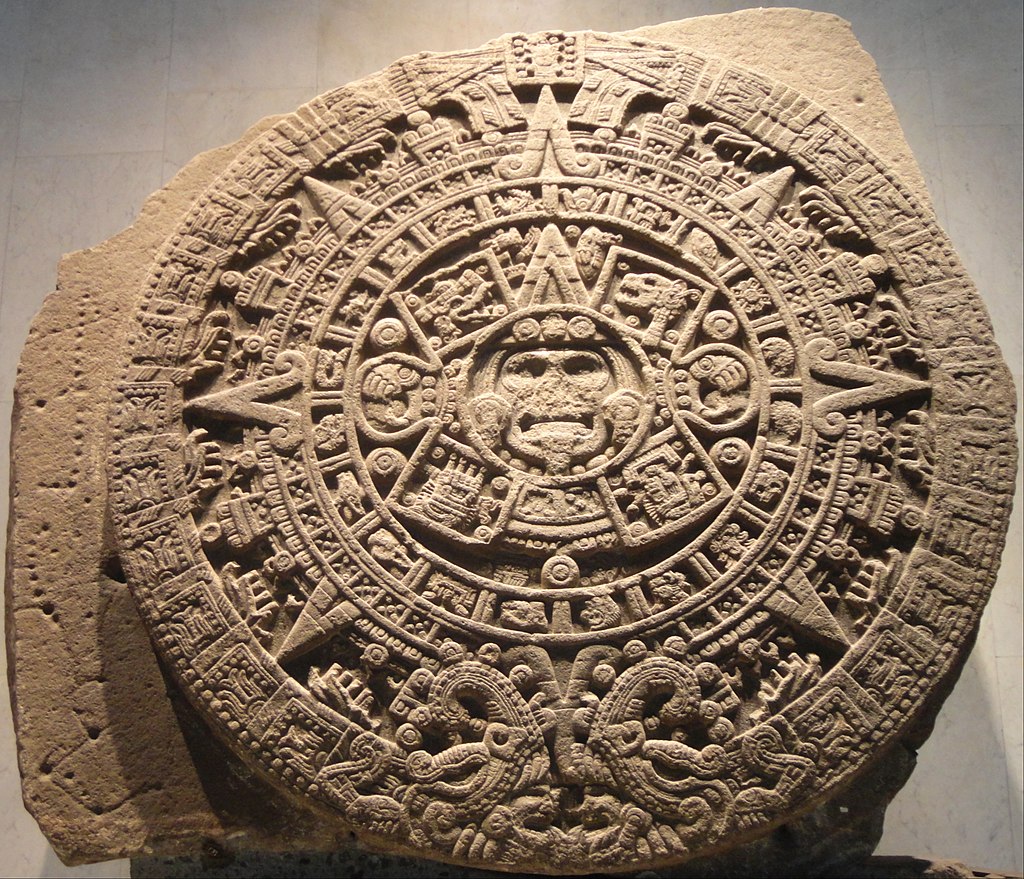 Sometimes called the Aztec Sun Calendar, the sun stone doesn’t actually track days of the year. Instead, it displays the five worlds of the sun according to Aztec mythology. These “worlds” represent different eras that the earth has experienced. At the center of the stone is a carving of their sun deity, Tonatiuh, who was known as “The Fifth Sun” or the final world/era.

The stone measures just shy of 12 feet in diameter and weighs over 54,000 pounds! It is the most recognizable piece of Aztec artistry.

The word Aztec is not the actual term that they used to describe themselves. This civilization referred to themselves as the “Mexica” (pronounced meh-SHEE-kah). For some reason, scholars took up the word Aztec a few centuries later and the word has been used ever since. 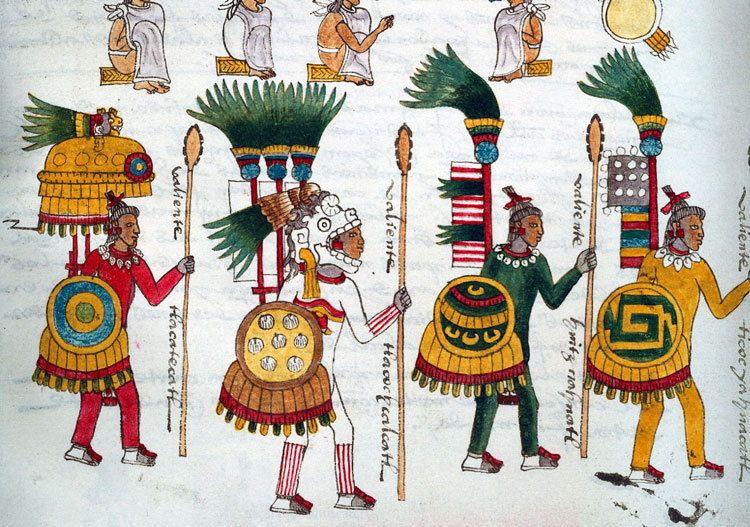 Activities for learning about the Aztecs

The Aztec Sun Stone is the most famous piece of art created by the Mexica (Aztec) people. After the Spanish conquest, colonizers buried it to remove it from view (it was too big to destroy and too heavy to move). More than 200 years later, it was discovered buried beneath the zócalo – or central plaza – in Mexico City. Today, it is displayed at the National Anthropology Museum in Mexico City.

Activity:
Print our Aztec Sun Stone Activity Sheet and use it to create your own sun stone. Consider watching this video from Khan Academy in preparation, and take a look at Symbolikon’s page on Aztec symbols. 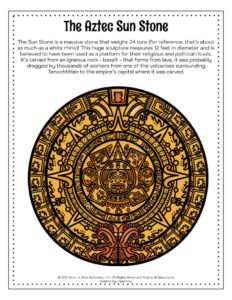 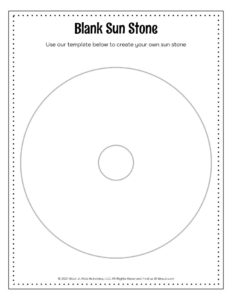 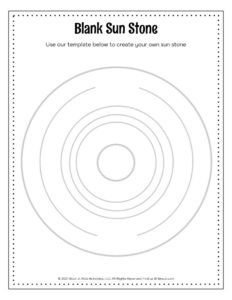 Animals played a major role in Aztec mythology and religion. Animals influenced where the Aztecs built their capital city and animal images may be found in their writing and symbols. The Mexica encountered these animals in the surrounding jungles and mountains.

Activity:
Print our Animals in Aztec Culture Research Pages. Use the graphic organizer to research information on some of the animals that are central to Aztec culture. Use our writing pages to write a one-page essay about each one. We’ve provided some suggestions (jaguar, golden eagle, jack rabbit, and deer), but you can select your own. 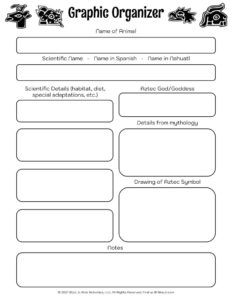 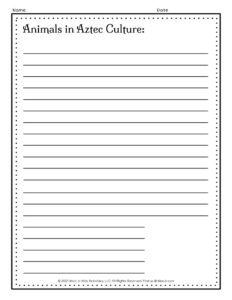 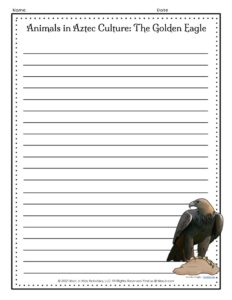 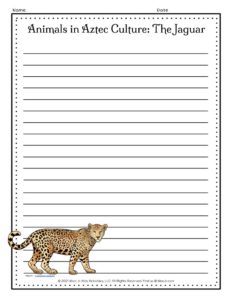 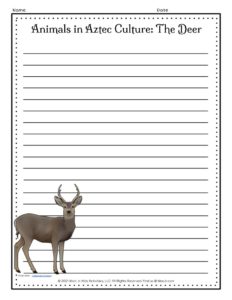 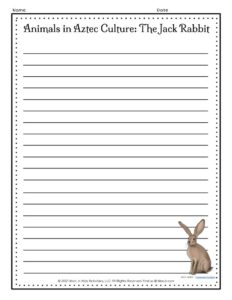 Learn About the Aztec Empire Printables

The first records of chocolate being used are from the ancient Olmec civilization. They passed their knowledge of chocolate on to the Maya, who in turn passed it on to the Aztecs. This final group loved the bitter bean more than anyone. In fact, they considered it more precious than gold and used the beans as money. The word chocolate actually comes from the Nahuatl (the language spoken by the Aztecs) word “Xocolatl.”

Activity:
Did you know that chocolate is actually a fruit? Print our page that describes How Chocolate Candy is Made and read through the steps! 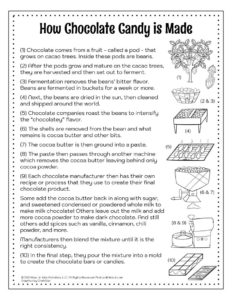 How Chocolate Candy is Made

Related Posts You May Enjoy