Perseverance, the car-size robot at the heart of NASA’s life-hunting Mars 2020 mission, is scheduled to lift off this summer. So it is perfect timing we share this fun and educational lesson plan to learn about the 2020 Mars mission for kids to help get them excited about this awesome mission!

Learn About the 2020 Mars Mission for Kids 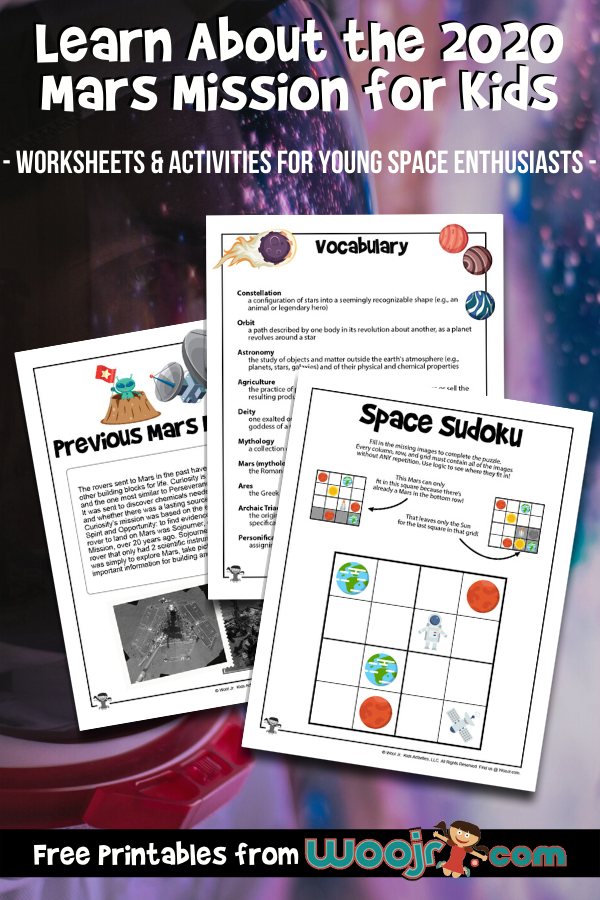 We have also created an exciting activity book to accompany this mission to the Red Planet. Grab your copy of NASA Mars Mission for Kids today!

What is a Rover? 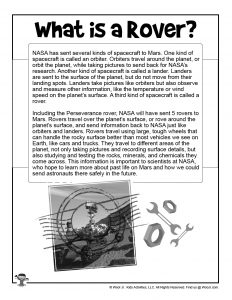 Including the Perseverance rover, NASA will have sent 5 rovers to Mars. Rovers travel over the planet’s surface, or rove around the planet’s surface, and send information back to NASA just like orbiters and landers. Rovers travel using large, tough wheels that can handle the rocky surface better than most vehicles we see on Earth, like cars and trucks. They travel to different areas of the planet, not only taking pictures and recording surface details, but also studying and testing the rocks, minerals, and chemicals they come across. This information is important to scientists at NASA, who hope to learn more about past life on Mars and how we could send astronauts there safely in the future. 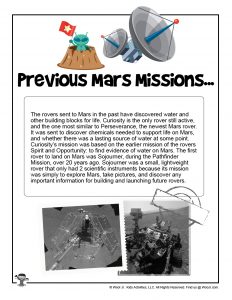 The rovers sent to Mars in the past have discovered water and other building blocks for life. Curiosity is the only rover still active, and the one most similar to Perseverance, the newest Mars rover. It was sent to discover chemicals needed to support life on Mars, and whether there was a lasting source of water at some point. Curiosity’s mission was based on the earlier mission of the rovers Spirit and Opportunity: to find evidence of water on Mars. The first rover to land on Mars was Sojourner, during the Pathfinder Mission, over 20 years ago. Sojourner was a small, lightweight rover that only had 2 scientific instruments because its mission was simply to explore Mars, take pictures, and discover any important information for building and launching future rovers. 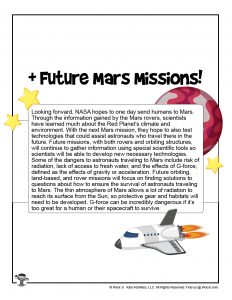 Looking forward, NASA hopes to one day send humans to Mars. Through the information gained by the Mars rovers, scientists have learned much about the Red Planet’s climate and environment. With the next Mars mission, they hope to also test technologies that could assist astronauts who travel there in the future. Future missions, with both rovers and orbiting structures, will continue to gather information using special scientific tools so scientists will be able to develop new necessary technologies. Some of the dangers to astronauts traveling to Mars include risk of radiation, lack of access to fresh water, and the effects of G-force, defined as the effects of gravity or acceleration. Future orbiting, land-based, and rover missions will focus on finding solutions to questions about how to ensure the survival of astronauts traveling to Mars. The thin atmosphere of Mars allows a lot of radiation to reach its surface from the Sun, so protective gear and habitats will need to be developed. G-force can be incredibly dangerous if it’s too great for a human or their spacecraft to survive.

Ancient Discovery of the Red Planet 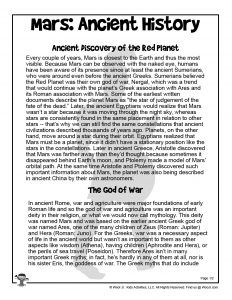 Every couple of years, Mars is closest to the Earth and thus the most visible. Because Mars can be observed with the naked eye, humans have been aware of its presence since at least the ancient Sumerians, who were around even before the ancient Greeks. Sumerians believed the Red Planet was their own god of war, Nergal, which was a trend that would continue with the planet’s Greek association with Ares and its Roman association with Mars. Some of the earliest written documents describe the planet Mars as “the star of judgement of the fate of the dead.” Later, the ancient Egyptians would realize that Mars wasn’t a star because it was moving through the night sky, whereas stars are consistently found in the same placement in relation to other stars — that’s why we can still find the same constellations that ancient civilizations described thousands of years ago. Planets, on the other hand, move around a star during their orbit. Egyptians realized that Mars must be a planet, since it didn’t have a stationary position like the stars in the constellations. Later in ancient Greece, Aristotle discovered that Mars was farther away than they’d thought because sometimes it disappeared behind Earth’s moon, and Ptolemy made a model of Mars’ orbital path. At the same time Aristotle and Ptolemy discovered such important information about Mars, the planet was also being described in ancient China by their own astronomers.

The God of War 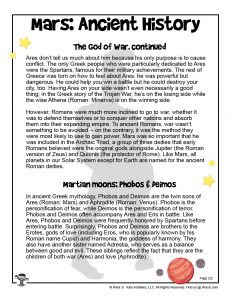 In ancient Rome, war and agriculture were major foundations of early Roman life and so the god of war and agriculture was an important deity in their religion, or what we would now call mythology. This deity was named Mars and was based on the earlier ancient Greek god of war named Ares, one of the many children of Zeus (Roman: Jupiter) and Hera (Roman: Juno). For the Greeks, war was a necessary aspect of life in the ancient world but wasn’t as important to them as other aspects like wisdom (Athena), having children (Aphrodite and Hera), or the perils of sea travel (Poseidon). Therefore Ares isn’t in many important Greek myths; in fact, he’s hardly in any of them at all, nor is his sister Eris, the goddess of war. The Greek myths that do include Ares don’t tell us much about him because his only purpose is to cause conflict. The only Greek people who were particularly dedicated to Ares were the Spartans, famous for their military achievements. The rest of Greece was torn on how to feel about Ares: he was powerful but dangerous. He could help you win a battle but he could destroy your city, too. Having Ares on your side wasn’t even necessarily a good thing; in the Greek story of the Trojan War, he’s on the losing side while the wise Athena (Roman: Minerva) is on the winning side.

However, Romans were much more inclined to go to war, whether it was to defend themselves or to conquer other nations and absorb them into their expanding empire. To ancient Romans, war wasn’t something to be avoided — on the contrary, it was the method they were most likely to use to gain power. Mars was so important that he was included in the Archaic Triad, a group of three deities that early Romans believed were the original gods alongside Jupiter (the Roman version of Zeus) and Quirinis (the protector of Rome). Like Mars, all planets in our Solar System except for Earth are named for the ancient Roman deities. 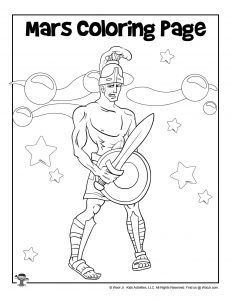 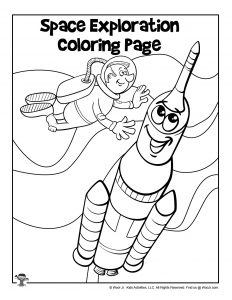 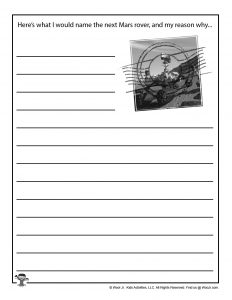 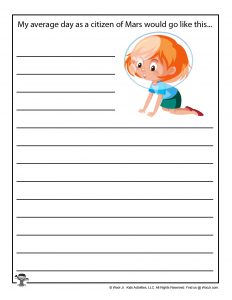 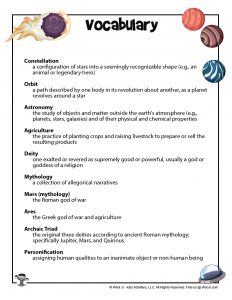 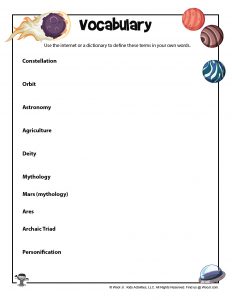 Fill in the missing images to complete the puzzle. Every column, row, and grid must contain all of the images without ANY repetition. Use logic to see where they fit in! 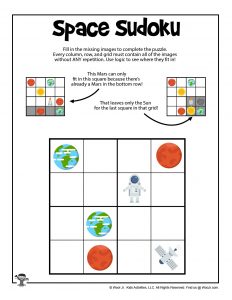 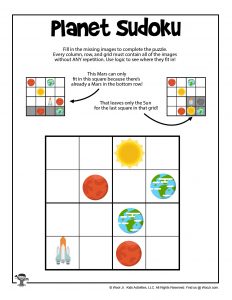 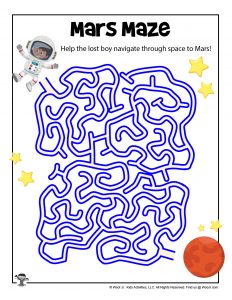 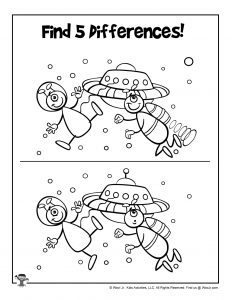 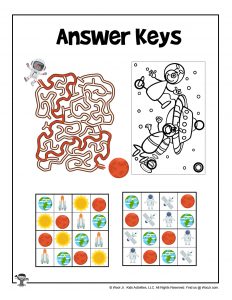 If you’ve found this lesson helpful to learn about the 2020 Mars mission for kids, you might also like this first Moon landing lesson plan & activities for kids.

View all articles by Cameon Galli