In the 18th century United States, the conditions under which people worked looked very different from how they do today. For example, a company could make its employees work very long hours in unsafe and unclean conditions. It was even legal for young children to work in factories and mines. Employees had few rights or the ability to ask for more money for their work. The labor movement that began during the industrial revolution is largely responsible for important changes in the workplace that still benefit workers today. This Labor Day for kids unit will teach about the history of the Labor Movement and includes worksheets, vocabulary words, and activity ideas.

The industrial revolution began during the 18th century, when inventions like the steam engine, textile mill, and cotton gin allowed companies to make things using machines instead of by hand. This was very different from the way people worked in the past on farms or as tradespeople in towns and cities. Many people came to the U.S. from other countries to find work in the growing factories, mills, railroads, and mines there. Unfortunately, as the industrial revolution grew, working conditions for people worsened and were often unsafe. 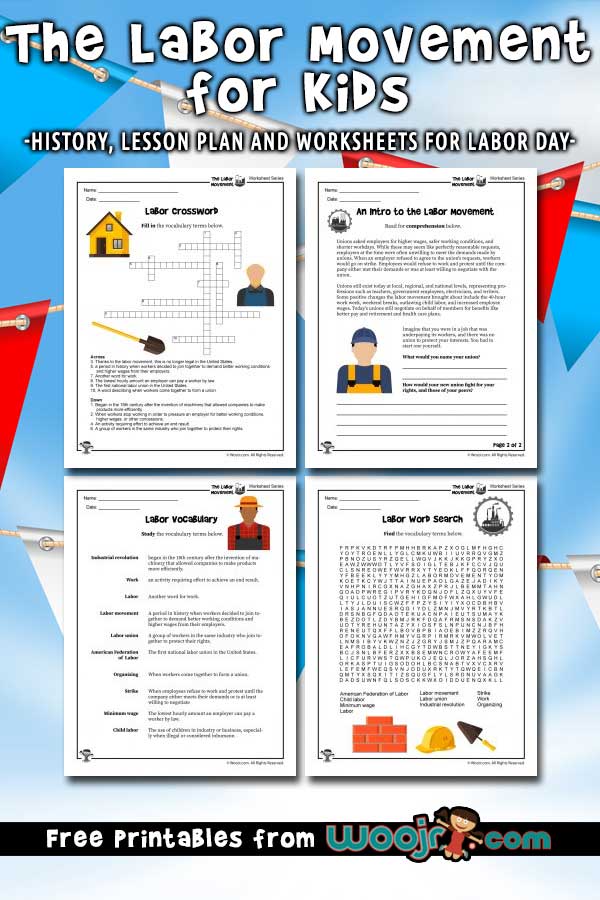 This led some workers to band together to ask employers for better working conditions. This marked the beginning of what is now known as the labor movement. A labor union is a group of workers in the same industry who join together to protect their rights. Early labor unions were local or regional. However, as the need to improve working conditions increased, larger unions were formed. The American Federation of Labor was the first national union, founded in 1886.

Unions asked employers for higher wages, safer working conditions, and shorter workdays. While these may seem like perfectly reasonable requests, employers at the time were often unwilling to meet the demands made by unions. When an employer refused to agree to the union’s requests, workers would go on strike. Employees would refuse to work and protest until the company either met their demands or was at least willing to negotiate with the union. 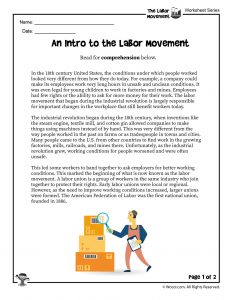 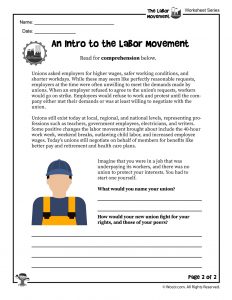 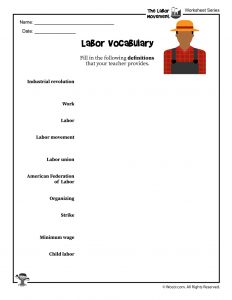 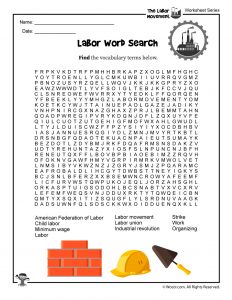 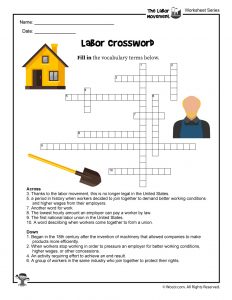 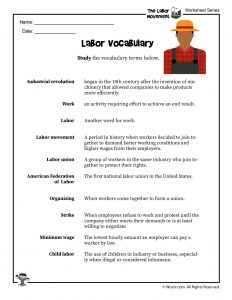 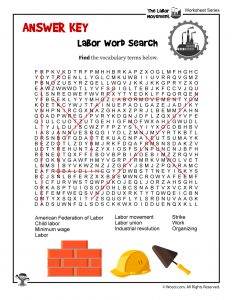 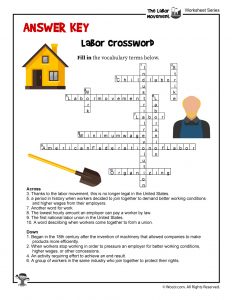 The ___________ began in the 18th century after the invention of machinery that allowed companies to make products more efficiently. (Industrial revolution)
______ is an activity requiring effort to achieve an end result. (Work)
_______ is another word for work. (Labor)
The ___________ is a period in history when workers decided to join together to demand better working conditions and higher wages from their employers. (Labor movement)
A _______ is a group of workers in the same industry who join together to protect their rights. (Labor union)
The _________ was the first national labor union in the United States. (American Federation of Labor)
_________ is a word describing when workers come together to form a union. (Organizing)
When workers go on ________, they stop working in order to pressure an employer to meet their demands for better working conditions or higher pay. (Strike)
The ___________ is the lowest hourly amount an employer can pay a worker by law. (Minimum wage)
Thanks to the labor movement, _________ is no longer legal in the United States. (Child labor) 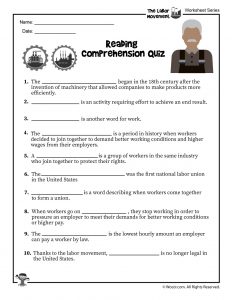 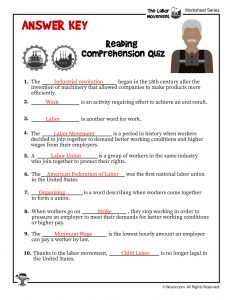 Divide students into two to four groups. Have each group decide upon an issue that they would like to change at school or in their classroom.

Ask students to consider the following issues to address in organizing to create better conditions for students at school:

How will this change help students?
What can students do if their request doesn’t succeed?
What consequences may occur if students take action to persuade the school to make the change?

Have students consider the following questions and discuss as a class:

Do you do chores at home?
What’s the youngest age when a person should be able to get a job?
Do you receive an allowance for those chores?
How would you feel if you had to do hard labor for 12 hours a day instead of going to school?
Do you think that having weekends off is a good thing for children and adults?