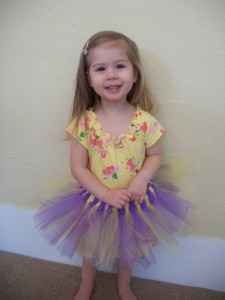 Make a cute, no-sew tutu in less than an hour!

OK, OK.  My kid doesn’t really need another tutu.  But I saw this tutorial and just had to make one.  I did mine a little differently than hers, but she gets all the credit for the idea (and even the color choice).  You can never have too many tutus, right?

Be sure to also check out this DIY fairy wings tutorial and our paper flower fairy crown tutorial!

What You Need to Make a Tutu 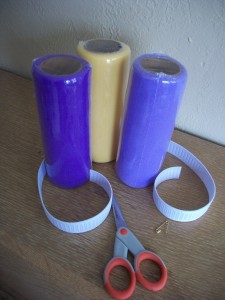 Supplies needed to make a tutu.

I chose a light purple, a dark purple, and a light yellow.  (I know, they look blue in the picture.)

Measure your kiddo’s waist and then take off about two inches.  I left extra on the end and used a safety pin instead of sewing the ends together.  That way I can adjust it to be bigger as she grows. 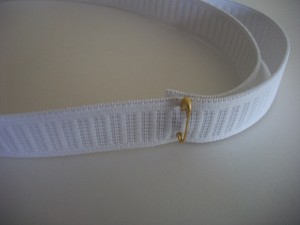 Attach the ends of the elastic and leave a couple of inches to tuck in as you work.

Cut your tulle into 18″ pieces.  They will be folded in half and knotted, so this leaves about eight inches sticking out when all is said and done. 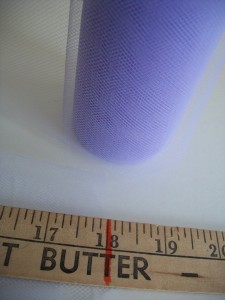 If you want a longer skirt on your tutu, just increase the length of the tulle pieces.

I chose to alternate colors in my tutu.  I stacked a dark purple on top of a light purple and folded them in half, scrunching them up in the middle.  The knot was formed by wrapping the loop around the elastic and the pulling the loose ends through.  I then alternated and did one that was a single piece of yellow tulle.  Work your way around, bunching them fairly close together.  They’re a little loose in this picture, but I slid them closer together as I got toward the end. 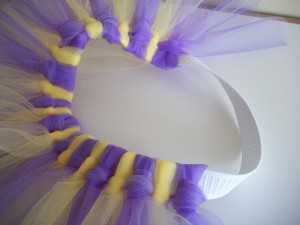 Work your way around the elastic to fill in the tutu. 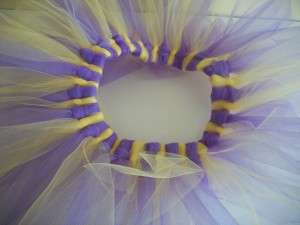 How to make a tutu!

I’m satisfied with our simple tutu for now but I’m thinking that if you wanted to take a wide ribbon, fold it over the top, and stitch it down, you could have a finished looking waist band.  (Then I’d probably tack on some ribbons and flowers and get really fancy.) 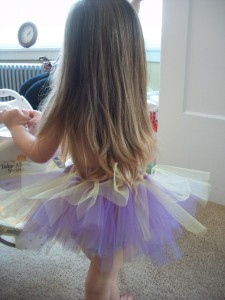 This tutu is adorable all the way around!

What I Learned the Hard Way: After cutting the first spool with scissors, I decided to get out my quilting mat and rotary cutter, and it went quite a bit faster.  It’s not necessary, but I found cutting the pieces to be a bit tedious.