Since I was writing yesterday about tortilla chips and how we make our own flour tortillas for tacos, I decided I just had to share our family steak taco recipe with you, because this is seriously one of my kids’ favorite dinners of all time. Not only that, but it’s also something I tend to make when they have friends over for dinner, and it’s one of my kids’ friends favorite dinners of all time. Admittedly, it’s a bit more involved than a simple ground beef taco, but I can assure you: it’s worth it. And in reality, it’s not a HUGE deal for a dinner – you can pull the whole thing together in less than 45 minutes, and that includes making your tortillas from scratch!

Chicken Alternate Variety: you can swap out the steak for chicken and prepare it the exact same way for chicken tacos, which are also phenomenal. 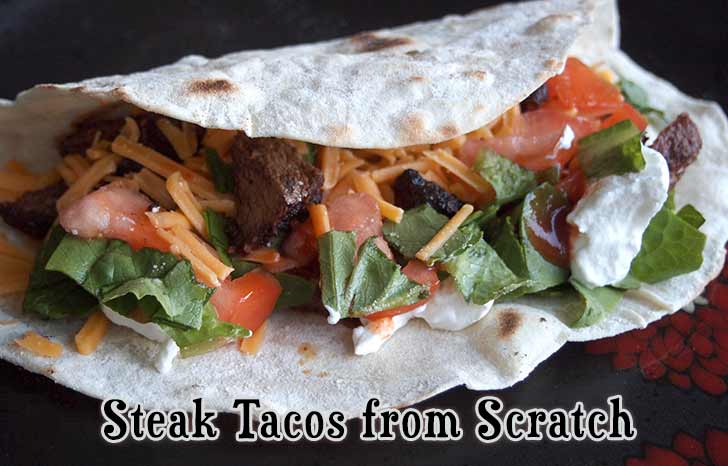 We’ve tried nearly every cut of meat on the planet for this recipe, and a flat iron steak is by far the best, tastiest option. It is slightly tougher than a regular cut of steak, but the flavor is hard to beat, and since you cut it up into tiny pieces anyway, the toughness is a non-issue. It’s also known as the butlers’ steak in the UK and oyster blade steak down under.

I make this in big batches and keep in handy in a mason jar – it’s like a beautifully better version of the taco seasoning packets you can buy in the store. Bonus points: it’s economical, too! So these amounts will make far more than necessary for this particular recipe, but you can also use it in soups, chili, or other Mexican-inspired dishes:

Put all of the above spices into a bowl and mix well. Transfer to a mason jar (or a baggie works!).

Side note: I’ve also used this mix from Quaker and haven’t really noticed a taste difference. But don’t buy it at Amazon for $10 a bag – I paid less than half that amount at my local store.

I start prepping the meal with the tortillas because they take the longest.

Put the flour into a bowl and add the Crisco. Mash it all up with your fingers to mix the shortening into the flour as much as possible – it will look like slightly crumbly flour. Add the other dry ingredients and mix well. Add the 1 3/4 cup of water and mix it with a fork until it pulls together into a ball. You might need additional water for it to pull together. Knead the ball just for a couple of minutes to ensure it’s all evenly incorporated. Then break the dough up into 10-12 2 inch balls of dough and let them rest for about 10 minutes. 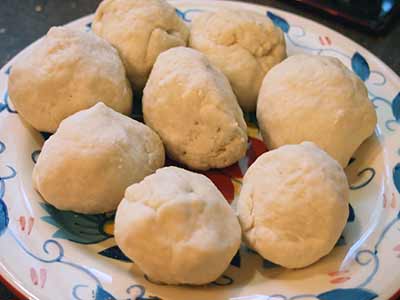 Allowing the tortilla dough to rest before you roll it out.

This is a good time to prep the filling ingredients: cut up the tomatoes and lettuce, and grate the cheese, and set aside. Also, preheat your preferred steak cooking appliance: a grill or broiler. We prefer the grill, (if we’ve remembered to get propane). To prep the meat for cooking, use the seasoning mix as a dry rub on the outside of the steak, rubbing it in and coating every single part of the surface. Make sure you don’t put the leftover mix back into the jar because it has touched raw meat! Set it aside until you’re ready to cook it.

Now roll out the dough into tortilla rounds. My system:

I usually try to get my husband to start cooking the steak on the grill right as I start cooking the tortillas, because the timing of having it all done at the same time works out pretty well. But if you’re doing it all yourself, go ahead and throw the meat onto the grill or broiler about now. You’ll have to pay close attention to flip the meat and flip the tortillas so that nothing burns – which is why it’s good to have someone else cook the meat.  Here’s how you do it:

Cook the steak for 3-4 minutes a side until you’ve reached the desired doneness.  Just check it frequently with a meat thermometer or by cutting slightly into the thickest part of the meat to make sure it’s cooked to your liking. What I like about the flat iron steak is that they tend to have varying thickness, so that I can get my nice medium cooked ends while my husband can get his super-rare part from the middle.

Allow the meat to rest for at least 5 minutes before slicing it across the grain, then chopping up the slices into small cubes. You might want to add a little more of the taco seasoning at this point for additional flavor.

To serve: give everyone a tortilla, and let them fill it up however they want. Fold in half, take a bite, let your eyes roll back into your head, and enjoy!