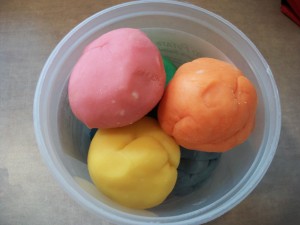 This play dough recipe has been one of our best craft projects yet.  Dot has been known to play with it for literally HOURS during the day.  The hardest part is convincing her not to mix all of the colors together, but we do what we can, right?  The recipe itself is pretty easy, although I had a bit of a scare, as I figured I didn’t have cream of tartar around the house.  It turns out my husband had purchased some for something he made back at Thanksgiving, so we were able to add it in.  Apparently, it gives the play dough better elasticity.  (By the way, don’t let the number of pictures in this post make you think this is a complicated project.  It was actually really, really easy.  I just took a lot of pictures.) 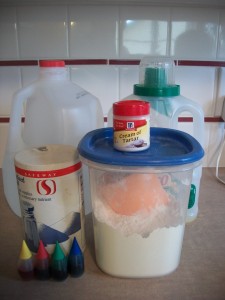 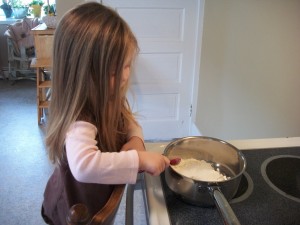 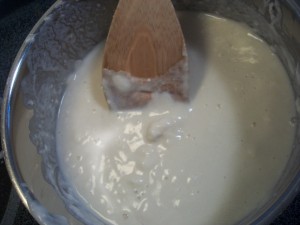 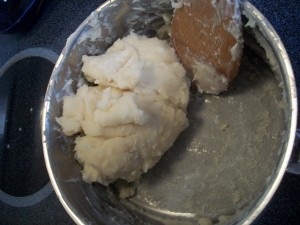 As you cook over medium heat, the play dough firms up, it only takes a few minutes

When the play dough is firm, take it out of the pan and knead it.  It’s probably not too hot, but check it just in case to make sure you or your kids don’t get burned. 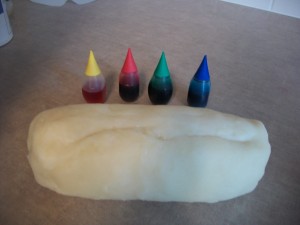 I then cut the dough into six roughly equal pieces, one of each color (red, orange, yellow, green, blue, and purple) 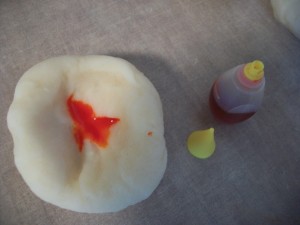 You can also make your play dough smell good by adding things like peppermint extract, cinnamon, vanilla extract, etc.  I added banana extract to the yellow, but apparently I needed more, as we couldn’t smell it when all was said and done. 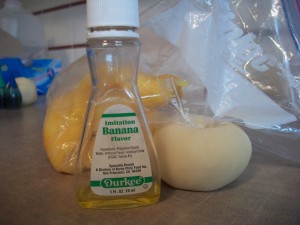 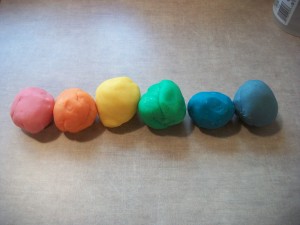 Keep your play dough in an airtight container, and it will last quite a while.  We’ve had ours for about two weeks, and it’s still in pretty good condition!

What I Learned the Hard Way: Mixing the color into the play dough is harder than it looks.  The majority of the time we spent making the dough revolved around mixing in the color.  You can make all of your dough a single color by adding the food coloring to the mixture before you heat it, but I wanted to have lots of colors and think it was worth the extra work.