Lately I’ve been on a cooking kick like never before in my life. Not only do I spend half my weekends cooking, but I’m also starting to make things from scratch that I usually buy from the store. I’ve been cooking up fresh pasta and ravioli and wrapping up homemade indivudual granola bars so the kids can throw them in their backpacks on the way out the door. But this last weekend I happened upon a HUGE hit with the kids, especially my son – homemade graham crackers! I’m wishing it was summer right now, because we’d be headed out to the fire pit to make s’mores right this second. 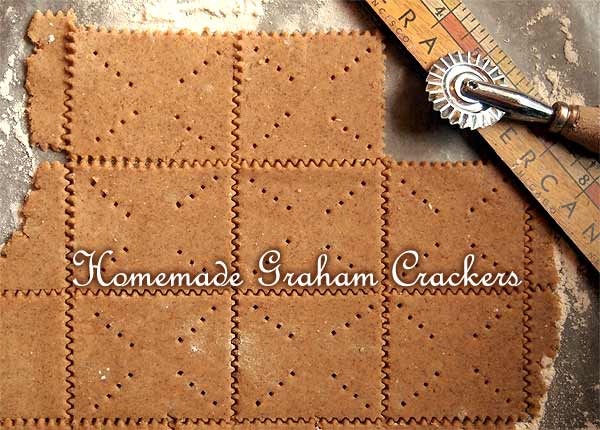 Homemade graham crackers recipe that your kids will gobble up!

I didn’t have all the ingredients in the recipe I found, so I adapted it to what I had in the kitchen. You could easily swap out the rye flour for whole wheat flour if you don’t have rye flour on hand.

How to Make Homemade Graham Crackers with Cinnamon & Honey

To prep the dough:

Mix the first 8 ingredients together in a bowl.

Using a pastry cutter (or a food processor), combine the butter and shortening with the dry ingredients until they are well incorporated with no huge lumps.

Add the honey, milk and vanilla and blend with a hand mixer (or food processor!) until the dough comes together to form a ball.

Form the dough into 2 or 3 small flat rectangles, wrap in plastic, and chill them for at least one hour. I like to form them into rectangles now so that it is easy to roll out the dough in a rectangular shape later. Less wasted dough!

To roll, cut and bake:

Preheat the oven to 350°. Mix 1/2 cup sugar with a tablespoon of  cinnamon and set aside.

Take out one package and roll it out onto a well-floured  sheet of waxed paper. You could roll it out directly onto your counter, but the dough is somewhat fragile, and it’s easier to work with and remove this way.

Roll it to slightly less than 1/4 of an inch thick. After a little experimentation, we found that anything thinner burnt too easily and got annoyingly crispy.

Use a ruler and a zig-zag pastry cutter or pizza cutter to cut the dough into squares or rectangles as shown in the photo at the top of the page.

Use a pastry brush to wet the tops of the crackers with some water, and sprinkle generously with the cinnamon sugar mixture. The crackers themselves aren’t very sweet, so the amount you use on top will determine how sweet they taste when finished.

Prick holes in the crackers with a fork to keep them from puffing while cooking, then use a spatula to transfer them to your cookie sheet.

Bake for 12 minutes, or until the edges just barely get brown. 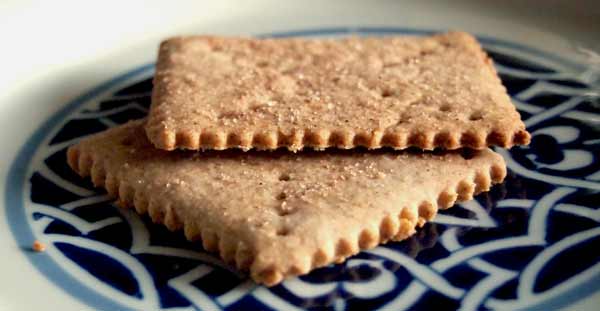 You can freeze the rest of the dough for up to 6 months, or leave it in the fridge for up to two days for a second batch to cook later. Or now. You can definitely cook more now. And if your kids eat them up like my son did, your entire batch will be gone in about 24 hours!