St. Patrick’s Day is a global celebration of Irish culture. Join us here as we dive into the history of St. Patrick’s Day with this lesson plan and worksheets. Included is a lesson on Saint Patrick and the traditions of the holiday. We’ve also included printable assignment worksheets for vocabulary, language learning and reading comprehension. 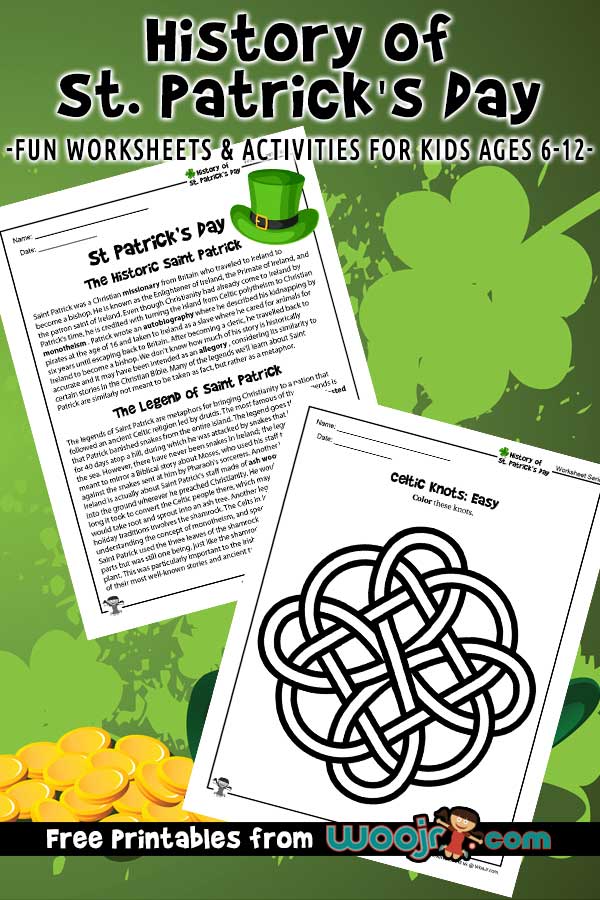 Saint Patrick was a Christian missionary from Britain who traveled to Ireland to become a bishop. He is known as the Enlightener of Ireland, the Primate of Ireland, and the patron saint of Ireland. Even though Christianity had already come to Ireland by Patrick’s time, he is credited with turning the island from Celtic polytheism to Christian monotheism . Patrick wrote an autobiography where he described his kidnapping by pirates at the age of 16 and taken to Ireland as a slave where he cared for animals for six years until escaping back to Britain. After becoming a cleric, he traveled back to Ireland to become a bishop. We don’t know how much of his story is historically accurate and it may have been intended as an allegory, considering its similarity to certain stories in the Christian Bible. Many of the legends we’ll learn about Saint Patrick are similarly not meant to be taken as fact, but rather as a metaphor.

The Legend of Saint Patrick

The legends of Saint Patrick are metaphors for bringing Christianity to a nation that followed an ancient Celtic religion led by druids. The most famous of these legends is that Patrick banished snakes from the entire island. The legend goes that Patrick fasted for 40 days atop a hill, during which he was attacked by snakes that he then drove into the sea. However, there have never been snakes in Ireland; the legend is probably meant to mirror a Biblical story about Moses, who used his staff to defend himself against the snakes sent at him by Pharaoh’s sorcerers. Another legend popular in Ireland is actually about Saint Patrick’s staff made of ash wood, which he would stick into the ground wherever he preached Christianity. He would stay there for however long it took to convert the Celtic people there, which may take so long that his staff would take root and sprout into an ash tree. Another legend that still hsa a place in our holiday traditions involves the shamrock. The Celts in Ireland had difficulty understanding the concept of monotheism, and specifically the idea of the Holy Trinity. Saint Patrick used the three leaves of the shamrock to explain how his deity had three parts but was still one being, just like the shamrock had three leaves but was still one plant. This was particularly important to the Irish, as 3 is an important number in many of their most well-known stories and ancient traditions.

Saint Patrick’s Day, or Lá Fhéile Pádraig in the Irish language, is held on March 17th because that is traditionally the date Saint Patrick died in the year 461. While it is
specifically an important day for Ireland, it is also a religious holiday observed by many other Christian churches around the world. On this day, restrictions on what Christians may eat and drink are lifted which has contributed to the “party” atmosphere of the holiday and its associated festivals. Due to the far-reaching spread of the Irish diaspora to many other countries, this is actually the most widely celebrated national holiday. Many traditions that we associate with Saint Patrick’s Day actually came about much later than the time he was in Ireland. The shamrock story mentioned above, for instance, was written down over a thousand years after his death.

Another tradition that most people strongly associate with the holiday is wearing green, but that tradition also started only a couple hundred years ago. While the holiday is popular around the world, it is sometimes thought to have become too commercialized and supports negative stereotypes of Irish people, so it is important to remember that it is an important cultural and spiritual holiday that should celebrate the history of Ireland. 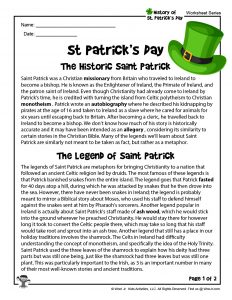 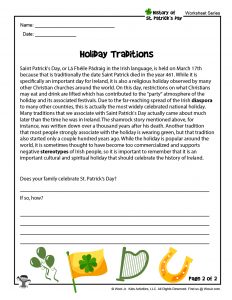 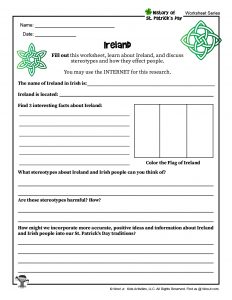 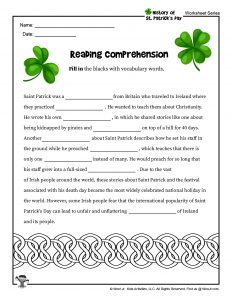 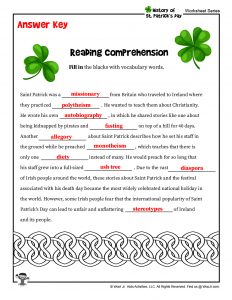 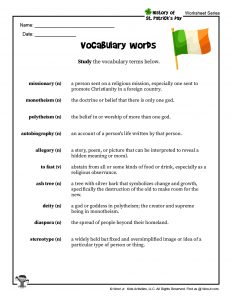 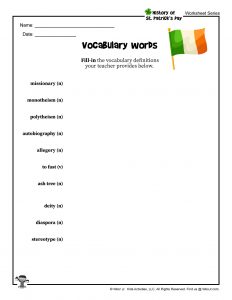 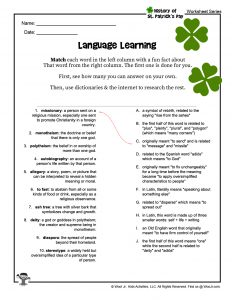 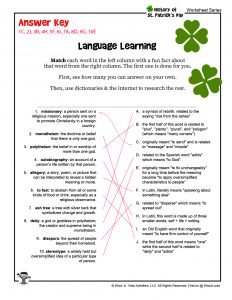 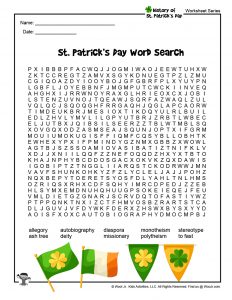 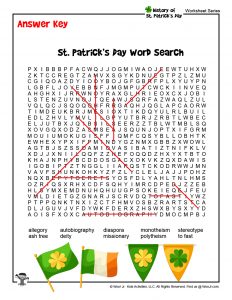 missionary: a person sent on a religious mission, especially one sent to promote Christianity in a foreign country.
monotheism: the doctrine or belief that there is only one god.
polytheism: the belief in or worship of more than one god.
autobiography: an account of a person’s life written by that person.
allegory: a story, poem, or picture that can be interpreted to reveal a hidden meaning or moral.
to fast: abstain from all or some kinds of food or drink, especially as a religious observance.
ash tree: a tree with silver bark that symbolizes change and growth, specifically the destruction of the old to make room for the new.
deity: a god or goddess in polytheism; the creator and supreme being in monotheism.
diaspora: the spread of people beyond their homeland.
stereotype: a widely held but fixed and oversimplified image or idea of a particular type of person or thing. 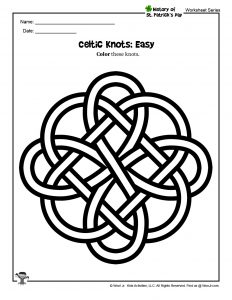 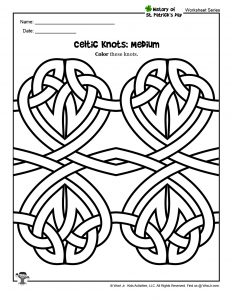 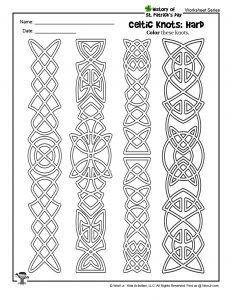 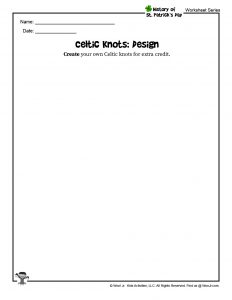 2) Independent Writing : Write a short autobiography. You can include information like where and when you were born, your favorite activities, your favorite class at school, information about your family, and anything else you find important or interesting!

3) Social Studies : Discuss Irish stereotypes. What is harmful or helpful about these stereotypes?

4) Social Studies : Research facts about Ireland. How might we incorporate more accurate, positive ideas and information about Ireland and Irish people into our St. Patrick’s Day traditions?

We’d love to hear from you on how you’re implementing this History of St. Patrick’s Day Lesson Plan & Worksheets. Want more content like this? Please tell us. We’re always looking for ways to best serve our readers.

Download 150+ pages of printable St. Patrick’s themed activities all at once here!