Did you know that the European country often referred to as “Holland” is actually The Kingdom of the Netherlands, usually shortened to “the Netherlands?” There are twelve provinces in The Netherlands, including North and South Holland, which is one reason the country was commonly known as Holland. Amsterdam, the nation’s capital, is located in the province of North Holland. Dutch is both the official language of The Netherlands and a word used to describe the people and culture of this country. With no natural barriers such as mountains or valleys, the Netherlands were invaded by other people for much of its history, including: Romans, Vikings, and Spanish and French conquerors. In 1839, the Netherlands finally became an independent country. 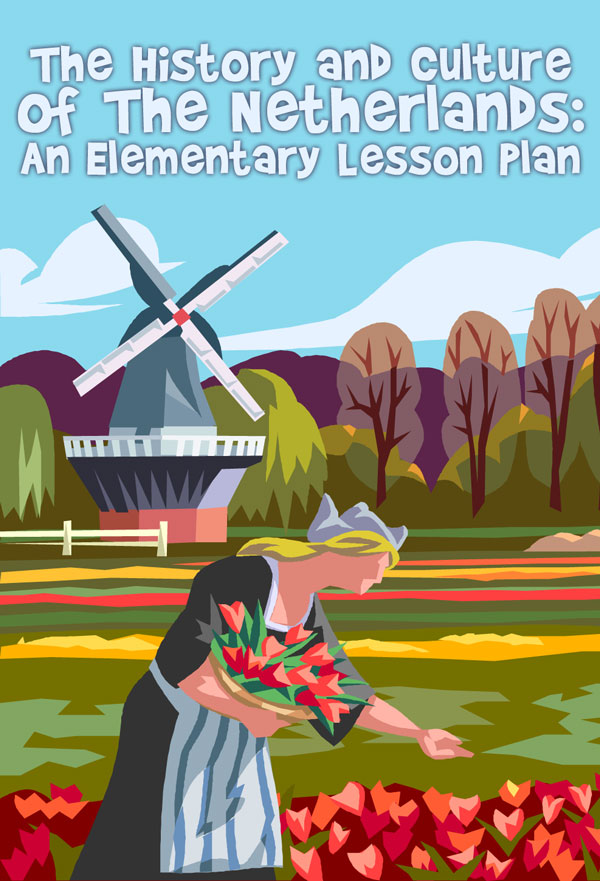 Windmills and Water Management in the Netherlands

The word “Netherlands” roughly means “low-lying country,” and this is certainly true of the land there, as more than half of the nation is below sea level. Being so close to the North Sea, water management is a major priority for the Dutch people. For centuries, wooden windmills helped to drain sea and rain water from the land, but today there is a mix of flood control management methods in place, including dikes, sea walls, canals and electric and gas-powered pumps.

A windmill is a tall, usually cylindrical structure with a series of blades mounted at the front; these blades spin around when the wind blows. While windmills were used in the Netherlands for many purposes, the main one was to pump water out of the lowlands. After a major flood in the 15th century washed away dozens of villages, residents began building sea walls and dams, and used windmills to drain the low-lying lands. This also allowed people to settle and farm in areas that were normally under water.

In the 16th century, windmill technology advanced to allow them to be used as saw mills, which made the Netherlands a shipbuilding center of Europe. The prosperity of increased travel and trade led to an era known as The Golden Age in Dutch history, which lasted through the 17th century. Windmills were also used to make paper and process grain, among many uses. The 19th century was the height of windmill use, with over 9,000 throughout the country. In the 20th century, steam, diesel, and electric-powered pumps replaced wind power for keeping water at bay. Today, there are over 1,000 windmills remaining in the Netherlands, and also over 2,000 wind turbines–modern windmills–that use wind power to produce electricity.

What is often considered traditional Dutch clothing-wooden shoes, lace caps or bonnets with “wings,”–was actually not worn everywhere in the Netherlands, but rather in a handful of rural villages, each with its own distinctive style, and with variations for special occasions. The North Holland fishing village of Volendam is the source of the most widely recognized traditional “Dutch” clothing. Today, people in the Netherlands dress like most people in Europe and the U.S., and regional traditional garb is seen only at festivals and in museums.

Wooden shoes are probably most strongly associated with Dutch fashion. These clogs, or klompen, were made of wood, and while they were once worn by farmers and urban workers throughout Europe since medieval times, they became strongly linked to the Dutch people. Klompen were worn to protect the feet while working on a farm or in a fishing village. Plain clogs were worn for work and clogs with carvings or paint were worn on Sundays or for special occasions. Today, Dutch wooden shoes are seen mostly in tourist shops or occasionally in rural areas.

Tulips and other exports from the Netherlands

Much of the land in the Netherlands is used for grazing and farming. The most popular crop grown there actually originated in Turkey, but when tulip bulbs were imported to the Netherlands in the 16th century, it was quickly discovered that they thrived in Dutch soil. Every spring there are tulip festivals around the country, and a variety of flower bulbs are sold to gardeners around the world. Other “bulb” flowers such as hyacinth, daffodil, and crocus are also grown in and exported from the Netherlands.

Dutch cheese is another popular product made from cow’s milk; draining the lands to allow cattle to graze made this possible. Dutch cheese first became known in other parts of the world during the extensive trading that occurred during Dutch Golden Age of the 17th century. Two of the most popular types of cheese are Gouda and Edam, named for cities in the Netherlands (though they are produced in rural areas, not the cities themselves). Other Dutch cheeses include: Limburger, Beemster, and Graskaas. 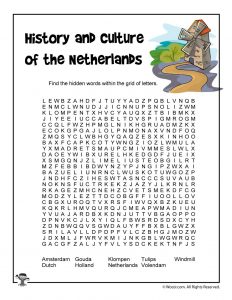 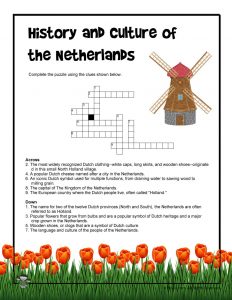 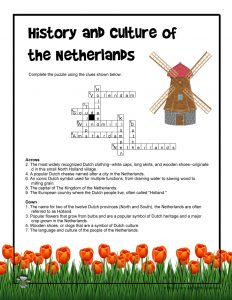 Netherlands – The European country where the Dutch people live, often called “Holland.”
Dutch – The language and culture of the people of the Netherlands.
Holland – The name for two of the twelve Dutch provinces (North and South), the Netherlands are often referred to as Holland.
Amsterdam – The capital of The Kingdom of the Netherlands.
Volendam – The most widely recognized Dutch clothing–white caps, long skirts, and wooden shoes–originated in this small North Holland village.
Windmill – An iconic Dutch symbol used for multiple functions, from draining water to sawing wood to milling grain.
Klompen – Wooden shoes, or clogs that are a symbol of Dutch culture.
Edam and Gouda – Two of the most popular Dutch cheeses named after these cities in the Netherlands.
Tulips – Popular flowers that grow from bulbs and are a popular symbol of Dutch heritage and a major crop grown in the Netherlands. 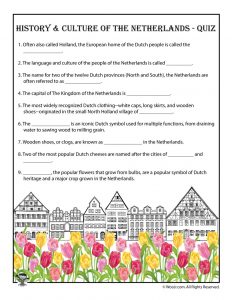 History & Culture of the Netherlands – QUIZ 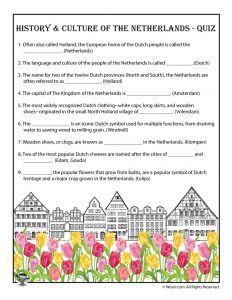 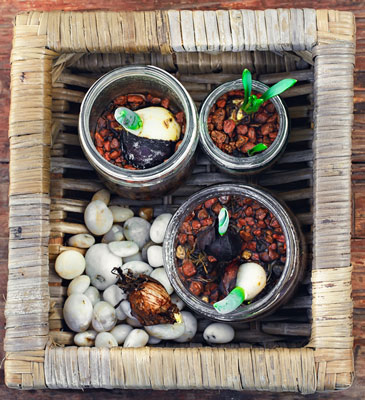 Objective: Teach students about the life cycle of a bulb plant, including measurement of stems and timing until flowering

Small flower pots or clear plastic or glass containers (this allows students to watch roots grow)
Plates or other flat containers to hold the flower pots and allow for water to drain
Paperwhite Narcissus bulbs (unlike tulips, these bulb flowers grow quickly and don’t require a prolonged exposure to cold temperatures when forced indoors)
Pebbles
Coarse potting soil
Water
An area near a window that gets regular sunlight

1. Place pebbles at the bottom of each flower pot for drainage
2. Depending on the size of your containers, place one to three bulbs in each container (some crowding is okay), with the pointed ends facing up
3. Cover the bulbs with potting soil
4. Generously water each pot
5. Have students note the number of bulbs per pot and the starting date.
6. Each week, have students track the date and note any root, stem, and flower growth

Discuss how a flower bulb is a built-in food source for the flowering plants, and how soil, water, and sunlight trigger the growth cycle. Have students examine which plants thrived and theorize about how and why.

We built this entire lesson plan around this wonderful printable Dutch village, including houses, a tulip farm, cheesemakers and a beautiful working windmill! 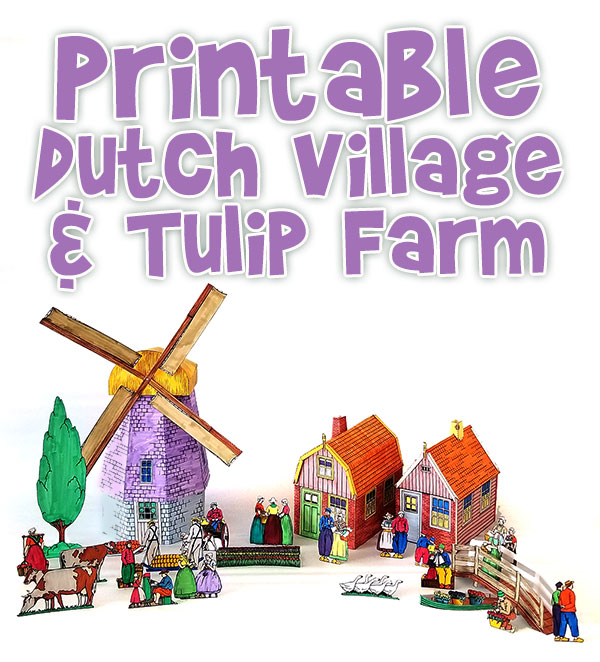