When I first launched Craft Jr earlier this year, I put together a set of Easter finger puppet crafts, and they were a huge hit. So I’ve decided to make it a tradition to create pipe cleaner finger puppets for every major holiday (wait till you see the turkey one for Thanksgiving – sooo cute!!). I got so carried away last weekend with making this set of Halloween finger puppets that I ended up with too many to fit into one post! So here is the “Halloween Critters” edition, and next week I’ll add here is the “Halloween Costumes” finger puppet collection.

The jack o’ lantern finger puppet also needs fabric paint (no matter how hard I tried to make the face with other materials, it just looked l.a.m.e.)

How to Make These Halloween Finger Puppet Crafts 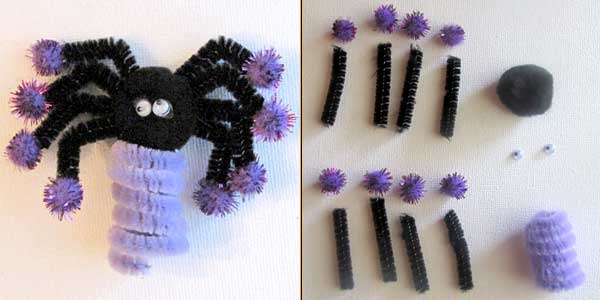 Wind the purple finger puppet base

Glue the spider to the finger puppet base

Glue the googly eyes in place 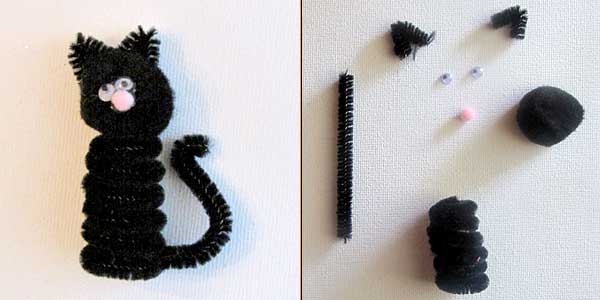 Wind the finger puppet base

Glue the ears onto the top of the head, and then add the eyes and nose on the front of the face

Glue the head onto the finger puppet base 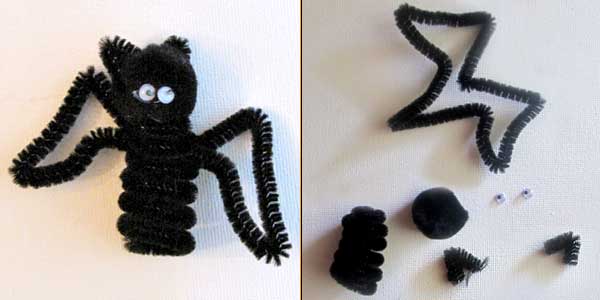 Pull the ends of the wings pipe cleaner into the middle “V” and wrap them around each other as shown in this image:

How to Make Bat Wings

Wind the finger puppet base

Glue the ears onto the top of the head, and then add the eyes  on the front of the face

Glue the head onto the finger puppet base

Glue the wings onto the back of the bat, or slip them in between the puppet base coils to hold them in place 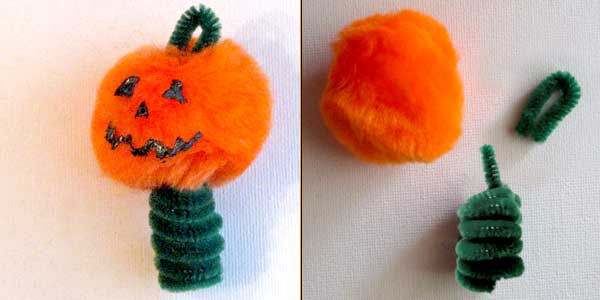 Strangely, what should have been the easiest puppet to make turned out to be the hardest to get looking right. There just wasn’t enough room on medium pom poms to make a good pumpkin face. So then I went to the store again to get big orange pom poms. These gave me the surface needed for the pumpkin face, but the size made them much harder to work with. You’ll notice that the finger puppet base on this one is different than the others – instead of winding the top coil slightly tighter, I ended up leaving a ‘post’ at the top to give the larger pom pom added support for the glue to hold.

I swear this dang pumpkin puppet is my fourth or fifth try – I even started experimenting with it back in April to no avail!

Cut a 3 inch piece of green pipe cleaner and bend it into the shape of a pumpkin stem as shown.

Wind the finger puppet base leaving a ‘post’ on top to support the large size pom pom.

Glue the stem onto the top of the large orange pom pom, and glue the pom pom onto the finger puppet base. Because the large pom pom is so much more fluffy than the medium ones, you really need to hold it in place until the glue sets.