Halloween is the absolute busiest time of year for Woo! Jr. – our pumpkin stencils in particular are crazy popular (and nearly crashed our server a few times until we had to upgrade it!). We used to have our content spread across 6 different sister sites, but now we’ve brought everything together in one place.

Below are almost ALL of our Halloween coloring pages: print, color and Happy Halloween! 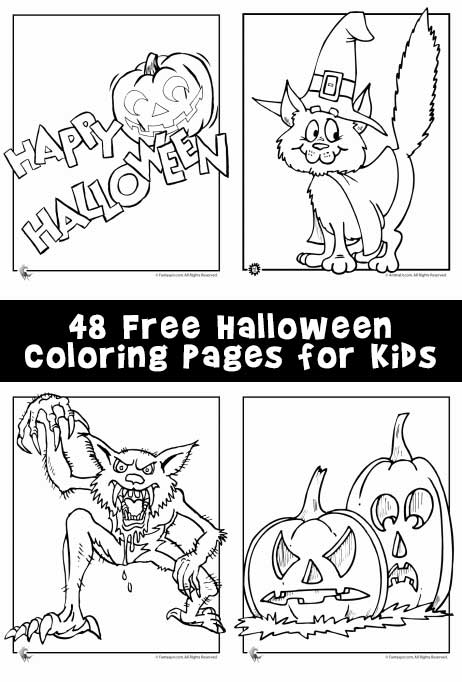 Nothing says Halloween like a big, orange pumpkin sitting in the front of your home. A few years ago, we threw our old Halloween jack o’ lantern into the burn pile in the yard. The next year I finally figured out that the vines and orange flowers growing in the weeds weren’t weeds at all, but a pumpkin plant! That started me on my quest to grow them every year. SOMEDAY I’ll grow one big enough to break a record, I swear it!

Trick or Treat Pumpkin and Ghost

These iconic monster define the Halloween holiday for most of us. It just wouldn’t be the same scary day without these creepers hanging around!

Gargoyle on a Ledge

My very first pet was a black cat, so I’m not all that scared of these adorable Halloween animals. And he never brought me any bad luck, either! Interestingly, black cats are actually considered to be good luck in the United Kingdom and in Japan. It’s primarily in the rest of Europe and here in the USA  that they are considered to be bad luck. In the middle ages, these poor creatures were commonly killed out of fear – the ironic result was that the rat population got worse and spread even more of the bubonic plague.

Since black cats are most commonly associated as a witch’s best friend, these cute cuddlies are now a fixture as a Halloween icon. I just hope it means that more black cats get adopted from animal shelters. Because sadly, black cats are generally the last to be adopted and first to be euthanized because people still believe that the color of a kitten’s fur can actually make or break their casino winnings. BOO on that!

Trick or Treat Cat in a Bag

If you have little kids, or children that are easily frightened, try printing out some of these cute drawings instead of the monsters above. Nothing creepy to see here!

We are total Harry Potter freaks in our family, even though the movies are all done and getting older. No matter how old they are, though, they will always be timeless to me. These witches aren’t very Potter-esque, but those wizards down there look an awful lot like Dumbledore!