“Green transportation” doesn’t mean green-colored vehicles — though they certainly can be green in color! “Green” refers to vehicles that are environmentally friendly (or friendlier) than those using fossil fuels. Another word for “green” is “sustainable.” This means using resources without completely draining or ruining their supply. The most common forms of green transportation are those that even children can use. Examples include: walking, riding a scooter, bicycling, carpooling, and taking public transportation–including a school bus. This lesson plan about green transportation for kids will help you teach them to be mindful of the impact that transportation has on the environment! 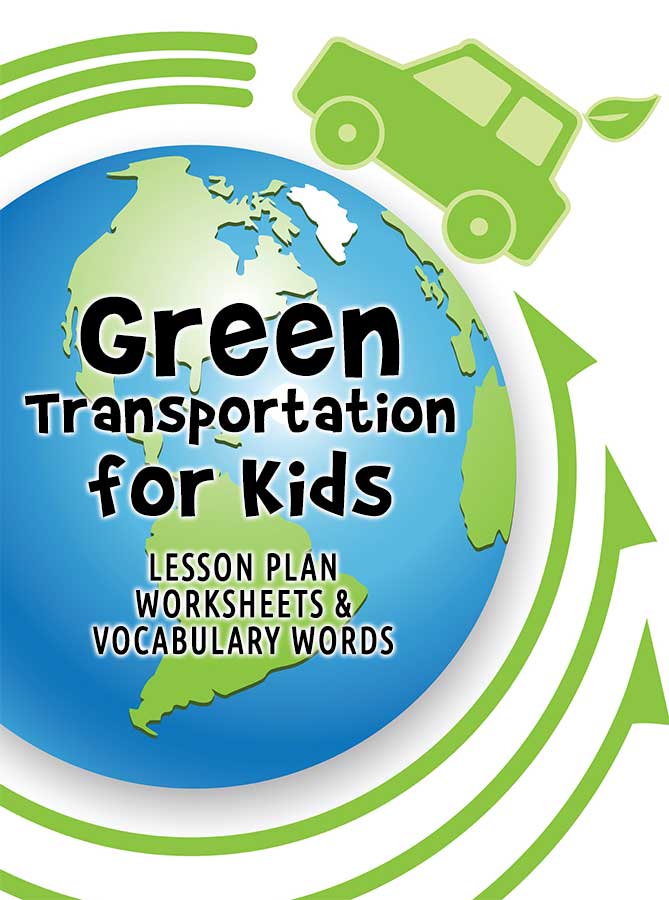 Scientists already know that fossil fuels like oil and natural gas won’t last forever. Also, most climate change scientists agree that fossil fuel use is contributing to global warming at a faster rate than normal. (To learn more, see our lesson plan on climate change.) Many countries and communities are working on reducing their “carbon footprint.” This measures how carbon dioxide is released into the earth’s atmosphere due to human energy use like driving cars that run on fossil fuels. Communities, countries, and manufacturers worldwide are looking for more earth-friendly ways of getting around.

Electric Vehicles – From trucks to cars to even bicycles, these vehicles run on electricity, but not from a really, really long power cord. Also called EVs, most electric vehicles operate by storing electric power in batteries. A downside to electric cars is that not all communities have charging stations readily available.

Solar Vehicles – Solar vehicles are powered by the energy of the sun. They often use solar panels mounted directly onto the vehicle that stores that energy like a battery does. There’s even a solar-powered airplane! There is still an environmental impact to solar vehicles: the raw materials to make the solar cells and panels that power them.

Biofuel Vehicles – Unlike fossil fuels, which come from very old plants, biofuel is made from plant materials more recently harvested for use. Common examples are ethanol, often made from sugarcane or corn, and biodiesel, commonly made from palm oil. A downside to this fuel source is the large amount of energy expended in harvesting the plants to make them.

Hybrid Vehicles – The word “hybrid” means “combination,” and hybrid vehicles run on two or more types of power systems. For example, many electric cars are actually hybrid cars that run on both electric power and gasoline. The environmental impact for each hybrid vehicle differs depending on what fuel sources are used. 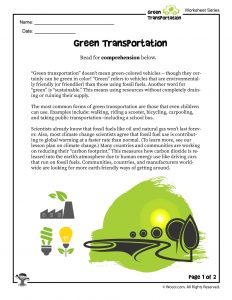 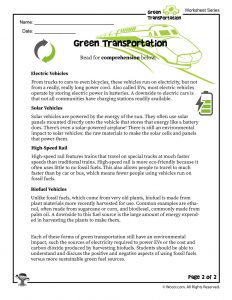 Each of these forms of green transportation still have an environmental impact, such the sources of electricity required to power EVs or the cost and carbon dioxide produced by harvesting biofuels. Students should be able to understand and discuss the positive and negative aspects of using fossil fuels versus more sustainable green fuel sources.

Carbon Footprint – The amount of carbon dioxide produced due to human energy use, either individually or as a group

Vehicle – Something used to transport people or goods

Fossil Fuel – A type of fuel created within the earth by dead plants and animals over a very long time (coal, natural gas, oil)

Biofuel – A fuel source made from biological materials like corn, sugarcane, or palm oil

Electric Vehicle – Also called an EV, electric vehicles are powered by electricity rather than fossil fuels

Hybrid Vehicle – A vehicle that gets its power from two different types of power sources, such as an electric car that also runs on gasoline 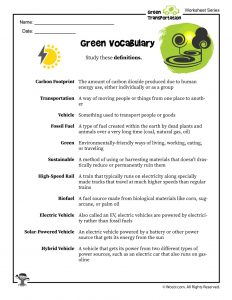 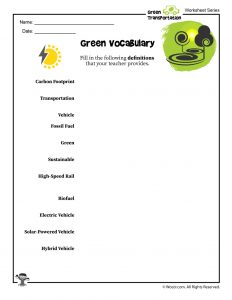 Green Vocabulary Fill in the Blank 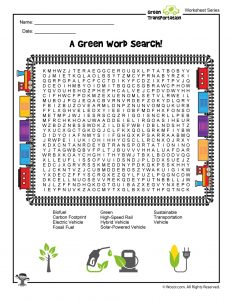 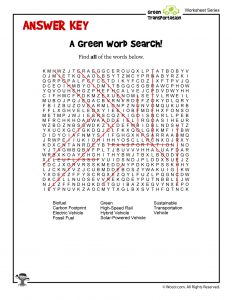 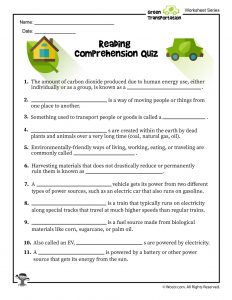 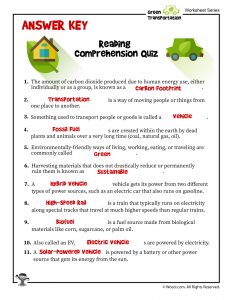 Divide students into four groups and assign one of the following types of green transportation to each group (or each group of individuals, to create on their own):

Students will create a poster exploring the following:

Have students create their own green vehicle using a variety of art materials. For example, they can create a bicycle, airplane, bus, helicopter, scooter, car, or train engine. Students should be able to describe what type of vehicle they’ve made and the type of green energy is uses to run. 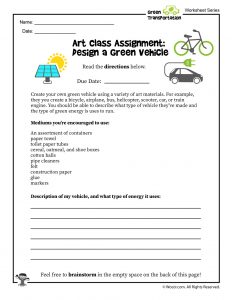