The other day I mentioned I was trying to make easy bunny cupcakes. I wanted them to be easy, but not lame. I figured it couldn’t be that hard, and it isn’t. They are almost as easy as my flower cupcake idea. 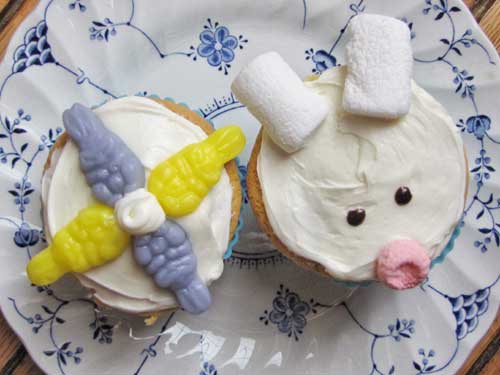 What you Need to Make Bunny Cupcakes

Chocolate syrup, mini chocolate chips, or other tiny round candies /sprinkles for the bunny eyes

How to Make Bunny Cupcakes

Honestly, decorating with gummy bunnies is pretty self-explanatory. I put four onto the cupcake and then added an extra dot of white frosting in the middle. 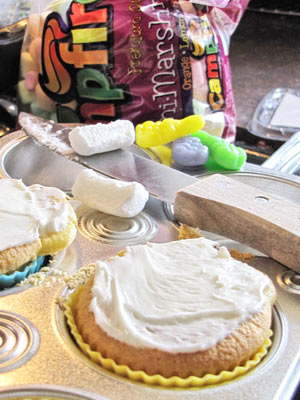 For the bunny face cupcake, I cut large white marshmallows in half, then in half again so that it was cut in quarters. (You can cut marshmallows with a butter knife or plastic knife, don’t let the big steak knife fool you!)

Place two of the marshmallow quarters onto the cupcake, sticky side down. Place a small pink marshmallow onto the bottom of the bunny face for the nose. I then took a toothpick and dabbed a tiny bit of chocolate syrup on the end, and placed the dots for the bunny eyes. This was my improvisation because I didn’t have any sprinkles or chocolate mini morsels laying around (what kind of cook am I that doesn’t have mini morsels in her kitchen?!).