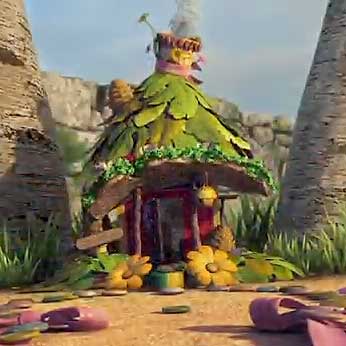 A few weeks ago, Disney brought me and a group of other moms out to California for a private screening of the new Tinker Bell movie, Tinker Bell and the Great Fairy Rescue. The movie was truly precious – kind of like a Peter Pan story just for little girls. But my crafty heart was set afire when there was an appearance of a homemade fairy house built by Lizzy – the adorable girl that befriends Tinker Bell. It comes out September 21.

I’ve always been a big Tink fan anyway – but this trip was nothing short of amazing. Not only did we get a personal presentation straight from the movie Director, but we also got to spend time with the Art Director. You know Disney animation – their cartoons are pure eye candy. The Art Director actually had a full 2 foot tall replica of the fairy house made in the movie.

You can see the fairy house better in the trailer:

I came home totally inspired to make my own fairy house. But I wanted to be an easy project – Tinker Bell’s fairy house (and most others) are elaborate abodes that take hours or days to complete. I don’t have the patience for that kind of project – how can I expect my kids to?! Then I found mini bird houses in the dollar section at Joann – perfect!!! (I would link to it, but evidently they must only sell them in stores because I can’t find them on their website – blah!)

So over the weekend I made this easy-peasy fairy house: 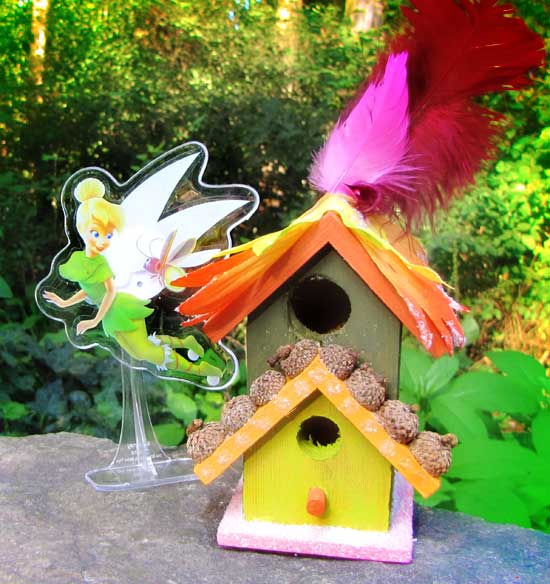 It might not quite be up to Tinker Bell’s standards, but my 8 year old daughter flipped over it!

To make a fairy house like this, start with an existing wooden bird house. It can be the cheap $1 models from Joann, or you could also refinish an old bird house. 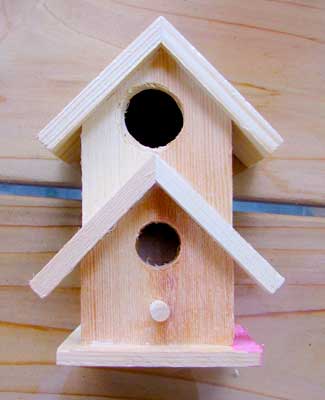 Next, paint it in pretty Tinkerbell-ish colors of craft paint: 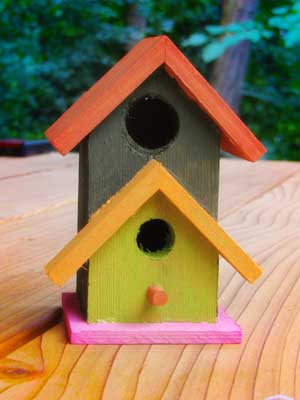 Then gather up supplies from outside and your craft stash to decorate your fairy house: 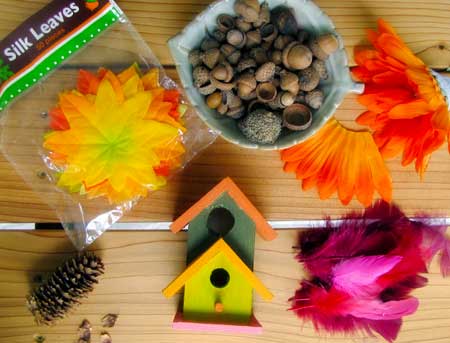 I used a fake silk leaf, a few dyed feathers, petals taken off of an old silk flower, and acorns. You could also use (with varying levels of permanence):

After you’ve decided what to decorate with, do a ‘dry run’ and arrange the items on your painted fairy house to ensure you know where you want to glue things in place. Then whip out a glue gun and stick it all on!

You may think you’re done, but NO. In order to make this a truly awesome fairy house, you need a secret ingredient.

Fairy Dust.
(AKA Glow in the dark glitter!)

Using regular glue, dab it onto your fairy house decorations as much or as little as you like: 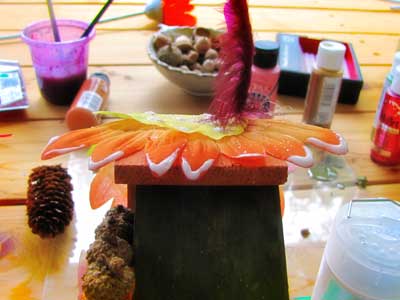 Then sprinkle the glow in the dark glitter fairy dust onto the house. NOW you are done! 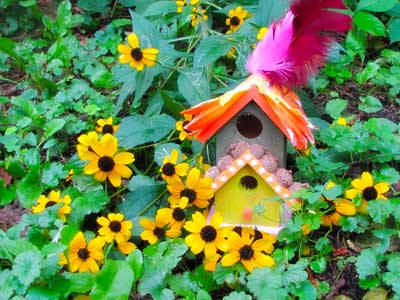