I had no idea that my craftiness would extend to making a game, but I found the instructions in our September edition of High 5 Magazine (It’s like Highlights, but for younger kids) and just had to try it.  Super easy, and super fun.

To make this shapes and colors game you will need: 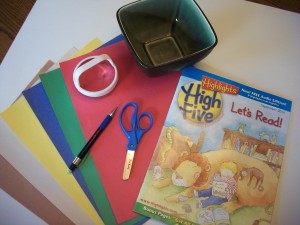 Start by cutting out four triangles from brown construction paper.  These will be your ice cream cones.  Next, cut out the scoops of ice cream from four different colors of paper.  (Four circles from each of four different colors.)  I used a cookie cutter to trace circles onto the construction paper.  Cut one small circle out of red paper.  This will be the cherry that goes on top of the winner’s ice cream. 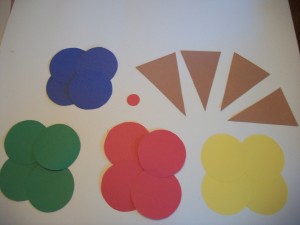 Crafting your own game.

To play the game, each player puts an ice cream cone in front of them.  The scoops are placed into a bowl or paper bag (we used a bowl, but it’s kind of easy for little eyes to peek that way), and when it’s your turn, you draw out one scoop.  If it’s a color you don’t have, you add it to your ice cream cone, and it’s the next player’s turn.  If you already have that color, you put it back into the bowl/bag, and pass it to the next player. 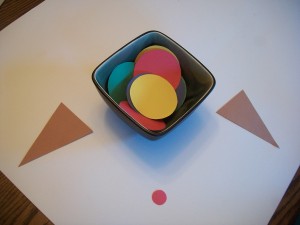 If you want more players, simply cut out more cones and scoops!

Whoever gets all four of their colors first wins the game and gets to put the cherry on top! 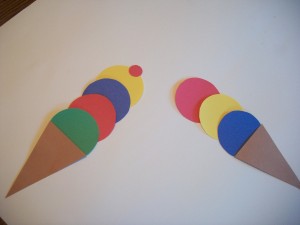