I think I am absolutely addicted to making pipe cleaner craft finger puppets. They have become one of the most popular project categories of all time on Craft Jr. I’ve made them so many times with my kids, that every now and then when they are bored, they just start making more all on their own. These are really foolproof, forgiving projects for kids. You literally can’t make a mistake with pipe cleaners – just keep bending them until it is right! And you don’t need much to make them look great – giving kids a creativity confidence boost.

The absolute BEST part of making pipe cleaner aliens is that there are no rules and anything goes.

Only have one googly eye? Great!
Do your colors mismatch? Even better!
Is one arm longer than the other?! Perfecto!!

When I made some of these with my kids last year, they went crazy with it, pretty much wiping me out of pipe cleaners and pom poms. Aliens are the perfect fun kids craft because they simply can’t mess up an alien. We totally make them up as we go along, using whatever we have laying around the house.

But if you want to make my alien family as shown above – keep reading!

I’ve placed a photograph next to each finger puppet with the exact materials needed for each alien. All of them require a very easy to find set of stuff:

Please refer to the original Easter finger puppets post for general assembly instructions. It gives general instructions on how to wind the pipe cleaners around your finger and how to attach the pom poms accurately. 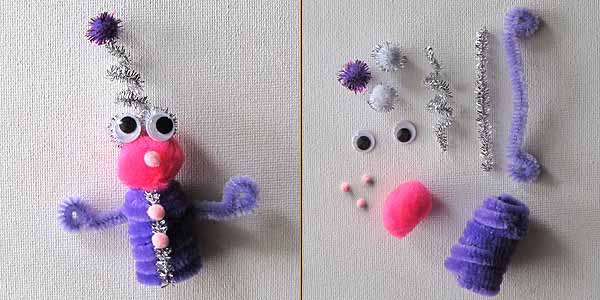 Wind the purple finger puppet base.

Bend a piece of purple pipe cleaner as shown to make the arms. Slip it in between the base coils pushing from front to back to stick them in place.

Glue two small silver pom poms to the top of the pink pom pom as the base for the googly eyes.

Glue the googly eyes to the silver pom poms and attach the last mini pink pom pom for the nose while you are at it.

Coil the last silver pipe cleaner around a pencil to make the antenna.

Glue one end into the top of Usura’s head, and glue another purple glittery pom pom on the top to make her look pretty! 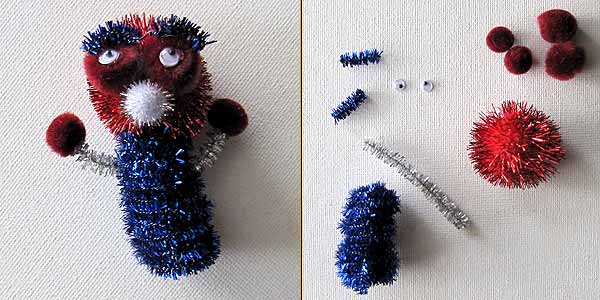 Evidence I can’t count: In addition to the materials shown above, I also used a small silver glitter pom pom for Ichzo’s nose.

Wind the pipe cleaner puppet base – it is very helpful with glitter pipe cleaners to use two instead of one!

Glue two dark red small pom poms to the ends of a 3 inch silver pipe cleaner for the hands and arms.

Slip the arms in between the base coils from front to back so that the arms are poking out of the back sides of the body.

Glue two medium dark red pom poms onto the large red glitter pom pom for the base of the eyes. Glue the small silver pom pom underneath them for the nose.

Slightly bend the two small pieces of blue glitter pipe cleaner and glue them onto the tops of the eyes for eyebrows (very Oscar the Grouch-ish, don’t you think?). 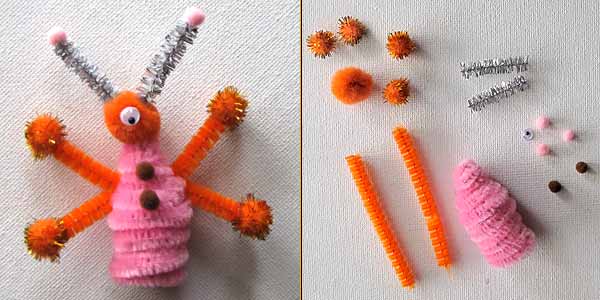 Wind the pink pipe cleaner puppet base – this time twist the top coils a little bit more to make her slender neck (that’s the Oh-So-Lovely part).

Glue two mini brown pom poms to the front of her body for buttons.

Slide the arms in between the coils and bend them up and down into the shape of an “X”.

Glue the googly eye onto the small orange pom pom.

Glue two mini pink pom poms onto the ends of 1 inch silver pipe cleaners to make the antenna. Glue them to the head. 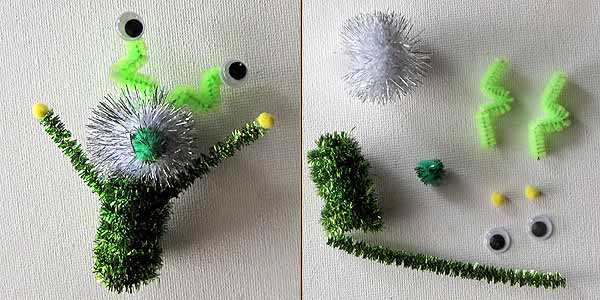 Coil the pipe cleaner finger puppet base. Again, when using glitter pipe cleaners, use TWO instead of one!

Glue the mini yellow pom poms onto the ends of a 4 inch green glitter pipe cleaner.

Slide it in between the body coils and bend the arms up.

Glue the small green glitter pom pom onto the middle of the large silver pom pom to make the nose.

Glue the googly eyes onto one end, gluing the other end into the top of the head.