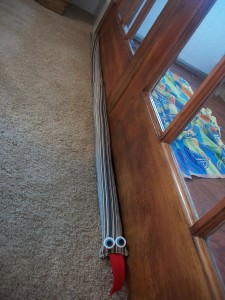 We recently moved into a very old house and immediately found ourselves in the midst of the snowiest November in as long as they’ve been keeping records on such things.  As you can imagine, it was cold and windy outside.   We sometimes found that it was also cold and drafty inside.   A good deal of air was coming in through the bottom of the fireplace, so we made this fun draft blocker to help keep us cozy.  My daughter is too young to use the sewing machine, but she helped with the parts of the craft that she could.

Most people use draft blockers at the bottom edge of their doors, so start by measuring the width of the door.  Add a half inch to that amount (for your 1/4″ seam allowances), and cut your fabric to that length.  I found a width of about five inches worked great, but you can adjust it if you have a larger gap at the bottom of the door.  If you don’t have one fabric that is long enough, stitch a few complementary fabrics together to get it to the right length.

Sew the long edge and one short edge, right sides together. 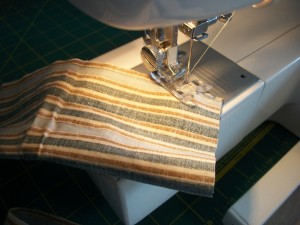 Sewing the fabric together for your snake draft blocker.

You’ve just created a tube.  Turn it right-side-in, and fill with rice.  My little one was able to help with this part. 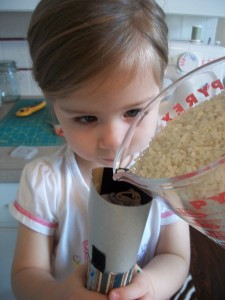 Leave a bit of empty space in the top so that your draft blocker is bendable.

Turn the unfinished edges under with the red felt tongue sandwiched between and sticking out. 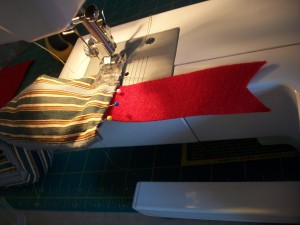 Sew the end together, remembering to backstitch at the beginning and end.

Finally, glue your buttons together to make eyes, and hot glue them in place.  We made ours by stacking a small black button on a medium blue button (the iris and pupil), and placing those both on top of a large white button.  If you have really little ones, you might prefer to sew the buttons on before filling and sewing up the end. 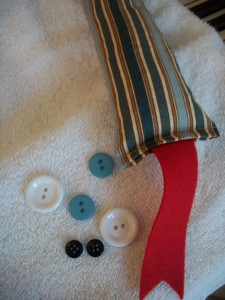 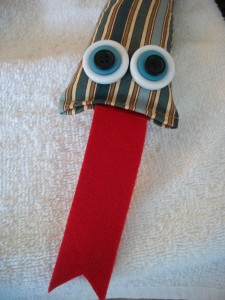 Ready to block some drafts!

What I Learned the Hard Way: This particular draft blocker was pretty long, and after about four cups of rice, I ran out.  Eager to have the project done, we went ahead and filled top several inches with popcorn, and it worked just fine! (Note from Wendy – cat litter also works very well as a stuffer!)