Long ago, people looked up to the night sky and gazed at the stars. Instinctively, they searched for patterns. And they saw them. Groups of stars looked like animals or people or ordinary things that people used in their day-to-day lives. They saw a swan and a harp and a hunter. Some groups of stars looked like a dog, while others looked like a queen. These constellation worksheets will help children learn about stars and the history of how these celestial ‘drawings’ came to be.

So constellations are groups of stars that resemble a person, animal, or thing. Sort of. If you imagine that stars are dots that you connect to make pictures.

Constellations can represent different things to different people. For example, the native people of Australia look at a group of stars and see a canoe. When we look at those same stars here in the United States, we call them Orion, the Hunter. And children in Japan call them tsuzumi boshi, a type of Japanese drum.

Most of the constellations we recognize today, though, were named by ancient Greeks who named many of them after characters in Greek mythology, such as Pegasus, Perseus, and Cassiopeia. Others were named by European explorers who used the stars to navigate their boats. 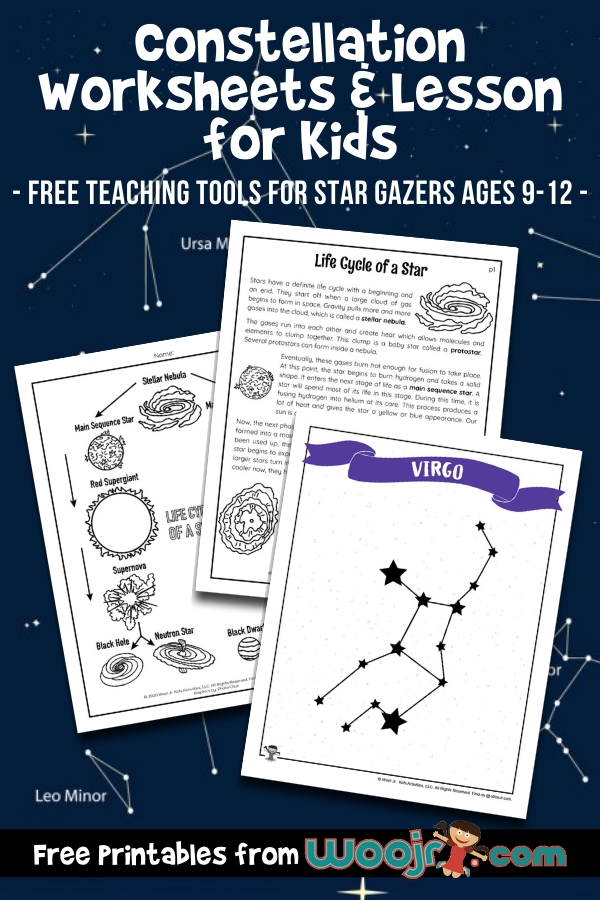 Usually, the constellations in the Northern Sky are easily visible to people who live in the northern hemisphere. That is the entire area between the equator and the North Pole. And the same is true for the Southern Sky – it’s visible to those living in the southern hemisphere.

What are Dark Constellations?

Some cultures looked up to the sky and also saw patches of dark space in between the stars. They called them dark constellations. And they also were named after objects with which the people were familiar. For example, the native people of Australia – Aborigines – looked up to the Milky Way and saw an emu in the dark spaces. But, as you can see from the picture above, the Inca from South America saw a llama and serpent in those same spots.

However, most of the time when people refer to constellations, they are talking about star clusters. Here are the five major constellations that can be easily found in the Northern Sky.

The big dipper is one of the easiest star patterns to find. It’s actually called an asterism, which means that it is a small group of stars easily seen in the sky and with a popular name but smaller than a constellation. In fact, the Big Dipper is actually the seven brightest stars of a much larger constellation, Ursa Major, which is also known as the Big Bear. The “handle” of the dipper makes up the bear’s tail, and the “cup” is the bear’s flank or hip area.

Because it is so easy to locate in the sky, the Big Dipper was actually used by the Underground Railroad during the U.S. Civil War. Southern slaves escaping to the North were told to follow the “drinking gourd” in the sky.

Polaris, also known as the North Star, happens to be the one stationary star in the sky. The stars in the sky don’t actually move. It is the Earth’s rotation that makes them appear to move across the sky. However, if you were to draw an imaginary line that went through the center of the Earth and out each pole (this line is called the axis), Polaris would be found on (or very near!) this line that comes out of the North Pole. So for that reason, as the Earth spins along its axis, it looks like Polaris isn’t moving. This has made it very valuable for sailors and explorers throughout history. 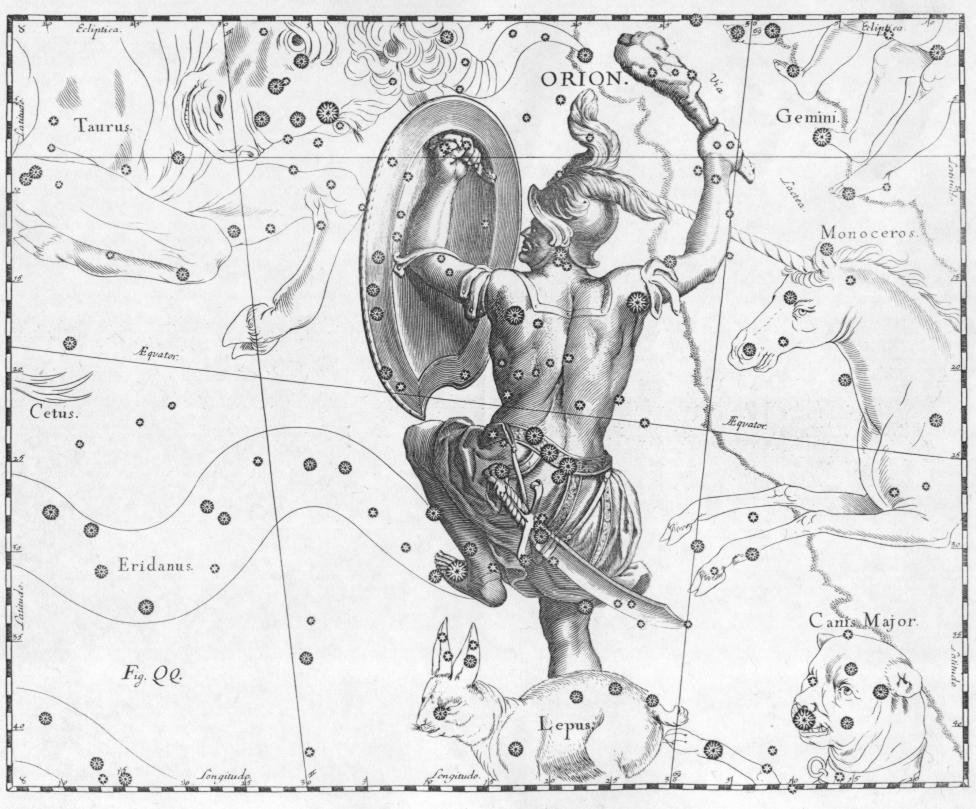 Orion, the Hunter, is named after a character in Greek mythology. It is easily found when you look for his “belt,” which is made up of three stars in a row. This constellation is fascinating because most of the stars that make up the constellation are bright young blue giants or supergiants.

Except for one. Betelgeuse, the star that marks the hunter’s right shoulder, is a red giant. It is also one of the largest stars on record.

Blue stars are usually young, hot stars that get their color from the large amount of hydrogen they burn. Red stars tend to be dying stars that have used up all their hydrogen and are in the final phase of a star’s life cycle.

The word gemini is a Latin word meaning “twins.” And this constellation is recognized around the world as being a set of twins…but just what type of twins sometimes differs. To the Egyptians, for example, they are twin goats. But for most Europeans and Americans, they represent the twin brothers in Greek mythology. In fact, the two brightest stars in this constellation are named after those Greek characters, Castor and Pollux.

Each year, as the Earth travels around the sun, it passes near an asteroid called 3200 Phaethon. This asteroid is shedding particles, which enter our atmosphere and burn up. This meteor shower is called the Geminids because it just so happens that the point in the sky where the meteors seem to come from is in the area of the Gemini constellation. It happens every year around mid-December.

Taurus, the Bull, is easy to find in the night sky. It sits just to the right (or northwest) of Orion. In fact, the brightest star in the Taurus constellation (a red giant star called Aldebaran) is believed to be the bull’s eye glaring at the hunter!

Activities for learning and constellation worksheets

Here are some of our printable resources for challenging your young students to learn about stars in the sky.

Language Arts
Early astronomers kept track of new discoveries by writing them down in journals. Keeping written records helped them to remember important events and new ideas. And many of them kept star maps inside those journals.

Activity: Download our constellation log and have your kids keep a running record of the constellations that their family observes in the night sky. Just print the pages and cut along the solid lines. The first page has the title page for the log. Be sure to keep it on the outside of your log. Print the second page on the other side of the paper. And then print the second page as many times as needed (double-sided!) to create the inner pages of the log.  Take time to stargaze as a family and record the names of the constellations you see, the date that you saw it, and which member(s) of the family saw it. Then use the bottom of the page to draw the constellation. 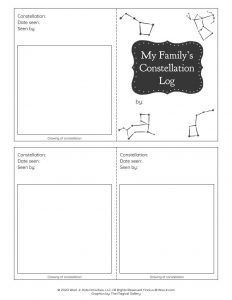 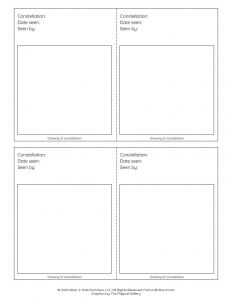 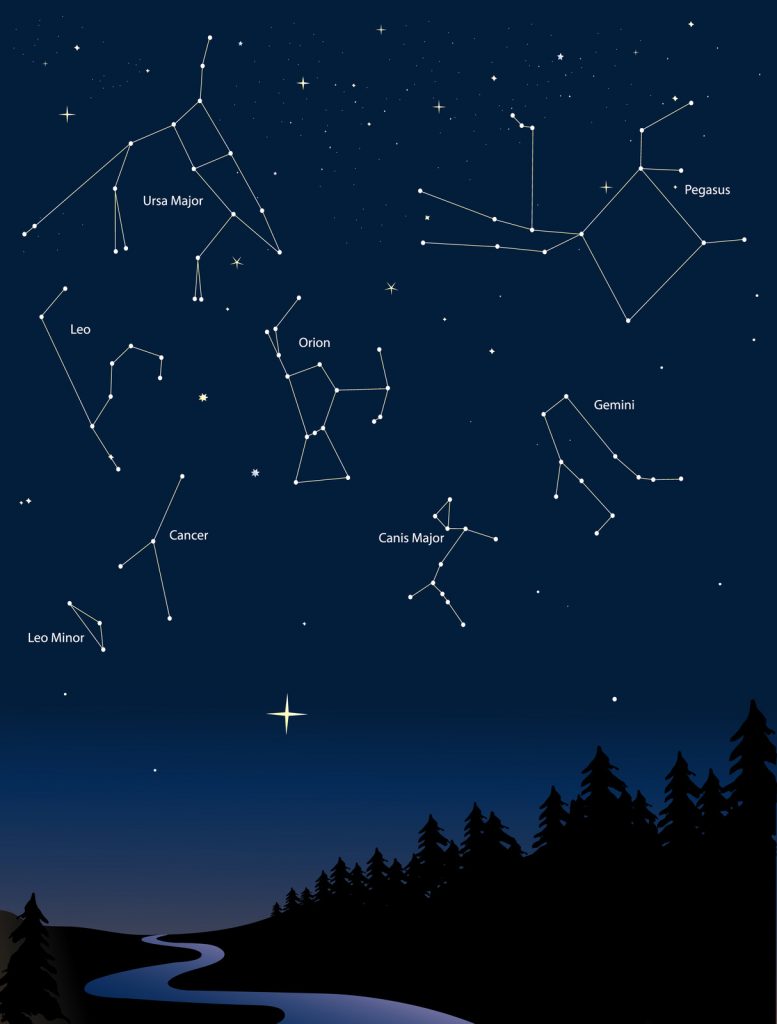 Activity: Download our storyboard for Nicolas-Louis de Lacaille and have your students research and fill in the surrounding spaces with those things most closely related to the French astronomer. They can use drawings or write in the information. Click here to see examples of other storyboards. 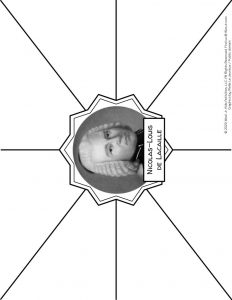 Science
Constellations are made up of stars. But what are stars made of? And are they all the same?

Activity: Print our star life cycle coloring page and reading passages. After reading about them, challenge your kids to create their own star life cycle using clay, pipe cleaners, and other craft items. 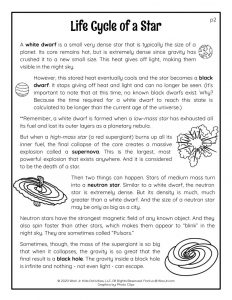 Life Cycle of a Star Lesson 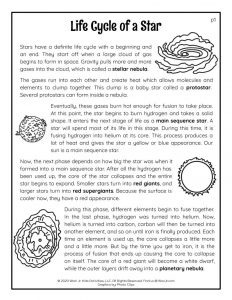 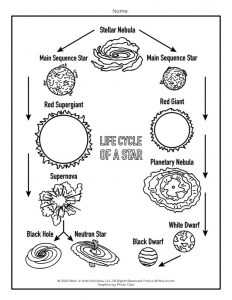 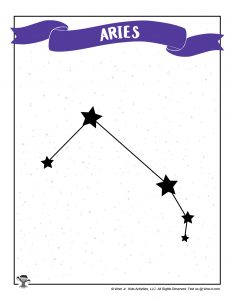 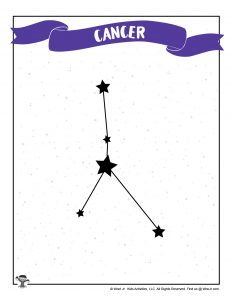 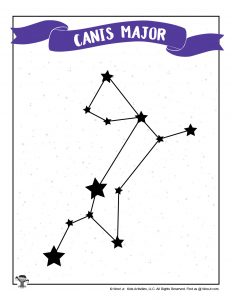 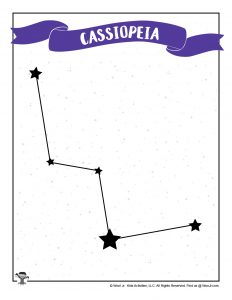 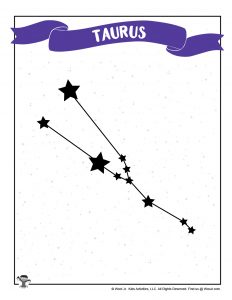 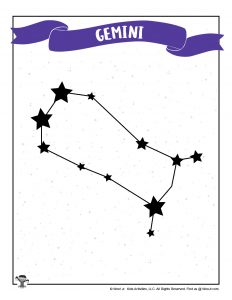 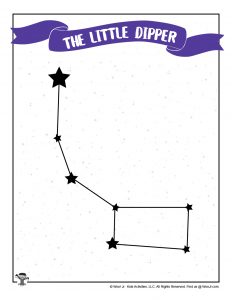 How to Draw the Little Dipper 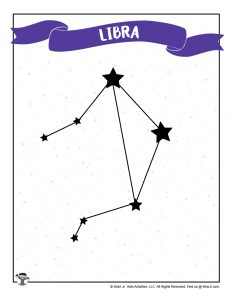 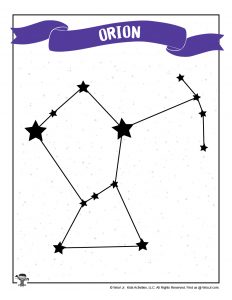 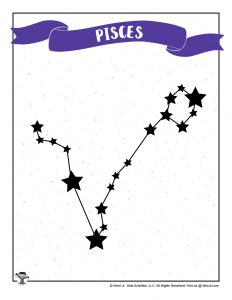 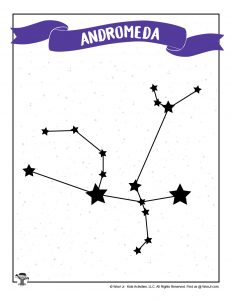 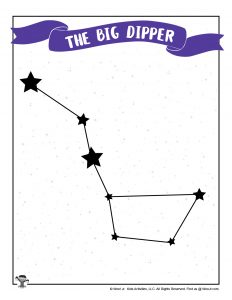 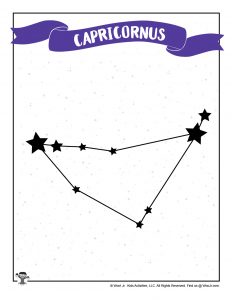 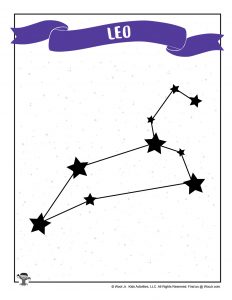 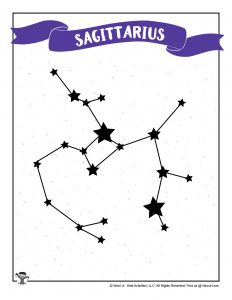 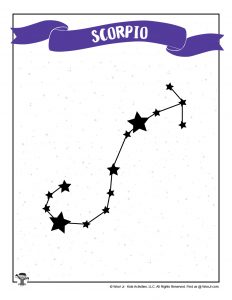 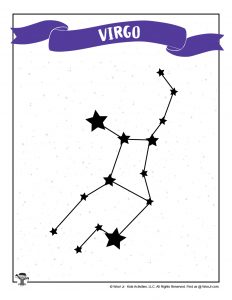 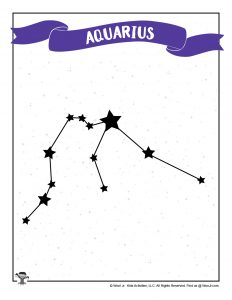