These printable Columbus Day worksheets are great for 2nd grade, 3rd grade and 4th grade (maybe even 5th grade!). Did you know that Columbus Day isn’t even a legal holiday in Nevada, and that South Dakota celebrates the day as officially a state holiday known as “Native American Day” rather than Columbus Day? Several other states celebrate it differently, too.

Despite the various political stances on the holiday itself, there’s no denying that it was an important part of American history.  The “discovery” of the New World definitely did a lot to shape the experiences of those living there not just way back in 1492 but also of those of us living today.  It’s amazing to think how one expedition by sea could have such a profound effect on the future. 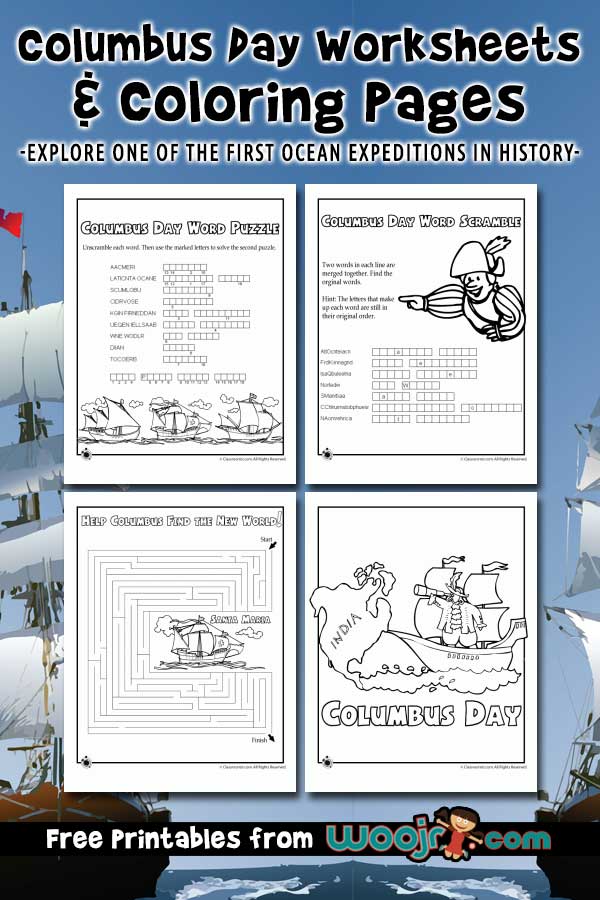 We also have a set of six Columbus Day coloring pages!

Did you know that Columbus Day goes by other names around the world?  For example, in the Bahamas, it is called Discovery Day, and many Latin American countries refer to it as Dia de la Raza, or “Day of the Race.”  Belize and Uruguay call it Dia del Respeto a la Diversidad Cultural, which translates to “Day of Respect for Cultural Diversity” in English.  In Argentina, they call it Dia de la Hispanidad, and in Spain, it’s known as Fiesta Nacional.

The first US American state to celebrate Columbus day was Colorado in 1906, and the rest of the nation followed suit when it became a Federal holiday in 1937.  Officially, the event is celebrated on the second Monday in October, which also happens to be when the US Navy commemorates its anniversary, although that institution was founded much later, in 1775.