You may have heard the phrases “climate change” or “global warming” on the news. Learn the science behind the buzzwords and what you (yes, you!) can do to help our planet. 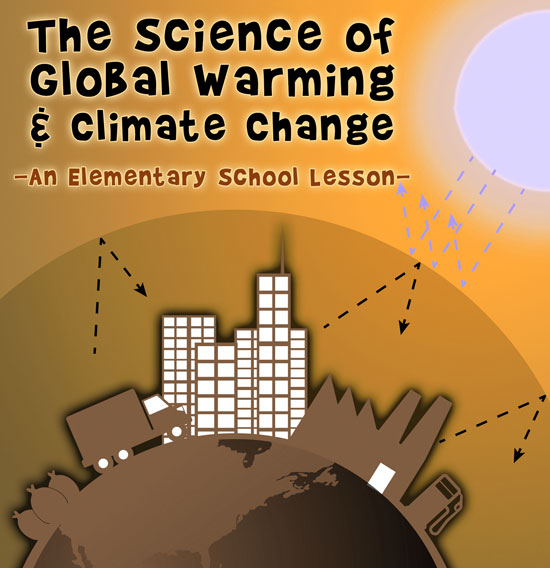 Weather refers to the weather conditions in a smaller area (your county, your town) over a short period of time (one season or a few years)
Climate refers to the average weather conditions in a large area (the Midwest, your state) over a long period of time (many seasons, usually decades)
Global Climate is the average weather of our entire planet over many years
Climate Change means what it sounds like, but refers to global climate, i.e., changes to the earth’s climate over a period of many years, rather than shorter-term weather changes or events
Global Warming is a normal phenomenon of rising temperatures worldwide, but human activities (use of fossil fuels) that produce what are called “greenhouse gases” are increasing both the amount and rate of global warming at an unnatural rate
Greenhouse Gases are gases like carbon dioxide, methane, and nitrous oxide that remain in the earth’s atmosphere, causing a warming effect on the earth’s surface
Fossil Fuels are types of fuel that were formed in the earth long ago from plant and animal materials. Examples are oil, coal, and natural gas. 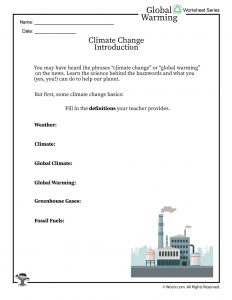 Now that you’ve got some basic definitions down, it’s time to learn about . . .

The Science of Climate Change and Global Warming 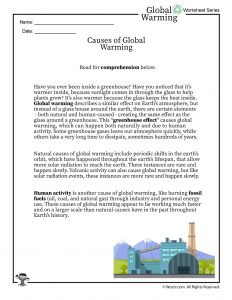 Have you ever been inside a greenhouse? Have you noticed that it’s warmer inside, because sunlight comes in through the glass to help plants grow? It’s also warmer because the glass keeps the heat inside. Global warming describes a similar effect on Earth’s atmosphere, but instead of a glass house around the earth, there are certain elements – both natural and human-caused – creating the same effect as the glass around a greenhouse. This “greenhouse effect” causes global warming, which can happen both naturally and due to human activity. Some greenhouse gases leave our atmosphere quickly, while others take a very long time to dissipate, sometimes hundreds of years.

Human activity is another cause of global warming, like burning fossil fuels (oil, coal, and natural gas) through industry and personal energy use. These causes of global warming appear to be working much faster and on a larger scale than natural causes have in the past throughout Earth’s history. 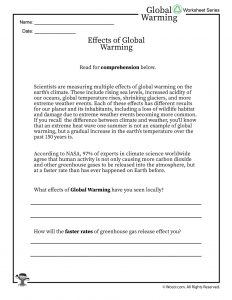 Scientists are measuring multiple effects of global warming on the earth’s climate. These include rising sea levels, increased acidity of our oceans, global temperature rises, shrinking glaciers, and more extreme weather events. Each of these effects has different results for our planet and its inhabitants, including a loss of wildlife habitat and damage due to extreme weather events becoming more common. If you recall  the difference between climate and weather, you’ll know that an extreme heat wave one summer is not an example of global warming, but a gradual increase in the earth’s temperature over the past 150 years.

According to NASA, 97% of experts in climate science worldwide agree that human activity is not only causing more carbon dioxide and other greenhouse gases to be released into the atmosphere, but at a faster rate than has ever happened on Earth before. 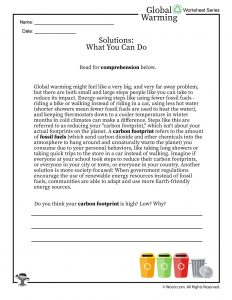 Global warming might feel like a very big, and very far away problem, but there are both small and large steps people like you can take to reduce its impact. Energy-saving steps like using fewer fossil fuels – riding a bike or walking instead of riding in a car, using less hot water (shorter showers mean fewer fossil fuels are used to heat the water), and keeping thermostats down to a cooler temperature in winter months in cold climates can make a difference. Steps like this are referred to as reducing your “carbon footprint,” which isn’t about your actual footprints on the planet. A carbon footprint refers to the amount of fossil fuels (which send carbon dioxide and other chemicals into the atmosphere to hang around and unnaturally warm the planet) you consume due to your personal behaviors, like taking long showers or taking quick trips to the store in a car instead of walking. Imagine if everyone at your school took steps to reduce their carbon footprints, or everyone in your city or town, or everyone in your country. Another solution is more society-focused: When government regulations encourage the use of renewable energy resources instead of fossil fuels, communities are able to adapt and use more Earth-friendly energy sources. 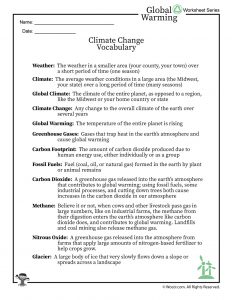 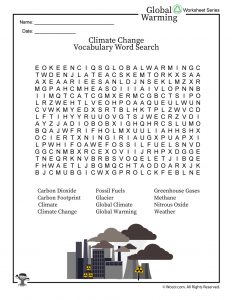 Weather – The weather in a smaller area (your county, your town) over a short period of time (one season)
Climate – The average weather conditions in a large area (the Midwest, your state) over a long period of time (many seasons)
Global Climate – The climate of the entire planet, as opposed to a region, like the Midwest or your home country or state
Climate Change – Any change to the overall climate of the earth over several years
Global Warming – The temperature of the entire planet is rising
Greenhouse Gases – Gases that trap heat in the earth’s atmosphere and cause global warming
Carbon Footprint – The amount of carbon dioxide produced due to human energy use, either individually or as a group
Fossil Fuels – Fuel (coal, oil, or natural gas) formed in the earth by plant or animal remains
Carbon Dioxide – A greenhouse gas released into the earth’s atmosphere that contributes to global warming; using fossil fuels, some industrial processes, and cutting down trees both cause increases in the carbon dioxide in our atmosphere
Methane – Believe it or not, when cows and other livestock pass gas in large numbers, like on industrial farms, the methane from their digestion enters the earth’s atmosphere like carbon dioxide does, and contributes to global warming. Landfills and coal mining also release methane gas.
Nitrous Oxide – A greenhouse gas released into the atmosphere from farms that apply large amounts of nitrogen-based fertilizer to help crops grow.
Glacier – A large body of ice that very slowly flows down a slope or spreads across a landscape 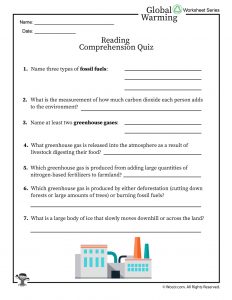 Name three types of fossil fuels (oil, natural gas, and coal)
What is the measurement of how much carbon dioxide each person adds to the environment? (carbon footprint)
Name at least two greenhouse gases (carbon dioxide, methane, nitrous oxide)
What are two natural causes of global warming besides greenhouse gases? (solar radiation and volcanic activity)
What greenhouse gas is released into the atmosphere as a result of livestock digesting their food? (methane)
Which greenhouse gas is produced from adding large quantities of nitrogen-based fertilizers to farmland? (nitrous oxide)
Which greenhouse gas is produced by either deforestation (cutting down forests or large amounts of trees) or burning fossil fuels? (carbon dioxide)
What is a large body of ice that slowly moves downhill or across the land? (glacier) 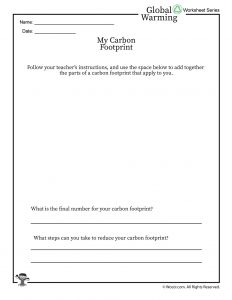 Your carbon footprint isn’t what happens when you track dirt into the house after school; it’s a general measurement of the amount of carbon dioxide produced due to your energy use, like: riding in cars, using electricity, or running hot water.

Common Sources of Energy Use:

Teachers: There are several “carbon footprint calculators” available online, and some can be printed up as spreadsheets, but it’s easy to develop a checklist of common behaviors that kids can measure

Have kids write down the following:
The number of cars in your household – 2 points per car
How you get to and from school:
Ride in a car with no other students – 3 points
Carpool with other students (including siblings) – 1 point
Ride the bus – 1 point
Ride your bike or walk – 0 points
Does your family recycle each week?
No – 1 point
Yes – 0 points
Does your family use bottled water, or reusable water bottles?
Bottled water – 2 points
Reusable water bottles – 0 points
What about tote bags at the grocery store?
We don’t use tote bags – 2 points
We use tote bags – 0 points

Have students brainstorm ways to reduce the carbon footprint of both their school (or home, if you homeschool) and individually
Keep thermostats set at eco-friendly temperatures year-round to save energy
Use less water – Take shorter showers
Car usage – Walk, ride a bike, or take public transportation, especially for shorter trips to save on fossil fuel use
Shopping – Reusable tote bags for groceries and other shopping trips, buy products with eco-friendly or less packaging
Plant Trees – Planting trees helps absorb excess carbon dioxide in the air 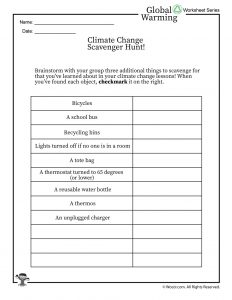 Purpose: Develop awareness of environmentally friendly practices in the community
Divide students into two groups
Start with a basic list of things to look for around the school building (or home/neighborhood), inside and out, that reflect our ability to reduce the effects of global warming
Bicycles
A school bus
Recycling bins
Lights turned off if no one is in a room
A tote bag
A thermostat turned to 65 degrees or lower
A reusable water bottle
A thermos
An unplugged charger
Have students brainstorm additional things from the climate change lesson
Send both groups out for a set amount of time to look for items on their scavenger hunt list
When students return, ask them to report what they found
Ask students what practices the school might adopt to reduce its own carbon footprint (clearer recycling guidelines, unplugging things when not in use, riding bikes, walking, or taking a bus or public transportation to school, reusable water bottles and thermoses, planting trees, composting)