The Sound of Summer

If the sound of summer could be narrowed down to just one sound, most people in North America would probably say, “the cicada song.” And this is especially true for those living in the areas of a cicada emergence.

But what most people don’t realize is how fascinating and unusual these insects actually are. In fact, scientists continue to be intrigued by this bug that has such an unusual life cycle. This cicada emergence lesson & activities unit is a great way to teach students ages 9 to 12 about cicadas and the unique phenomenon of a cicada emergence. 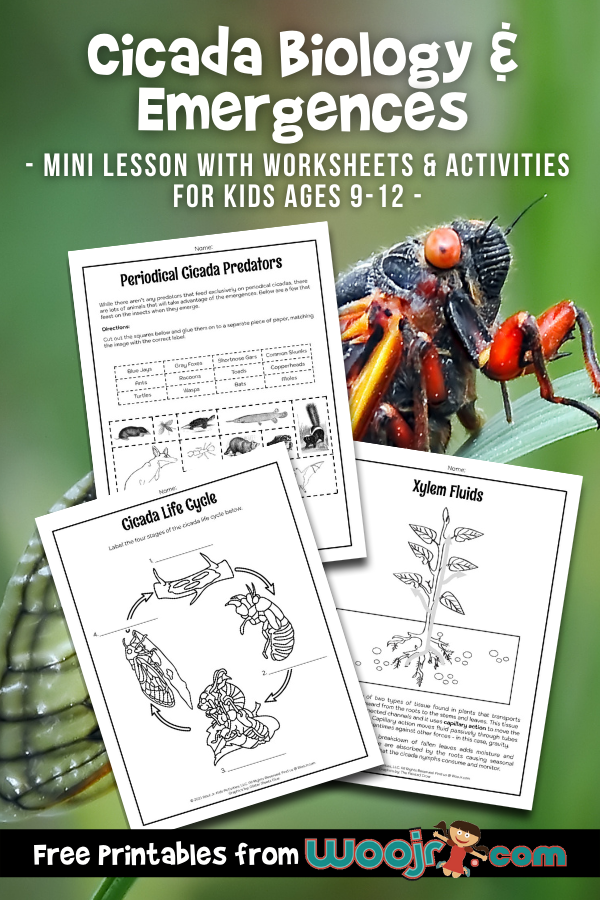 Would you believe that 3,000 different species of cicada exist around the world? And they are broken down into two types: annual and periodic.

We must first learn about the insect’s life cycle in order to understand the difference between the two types. 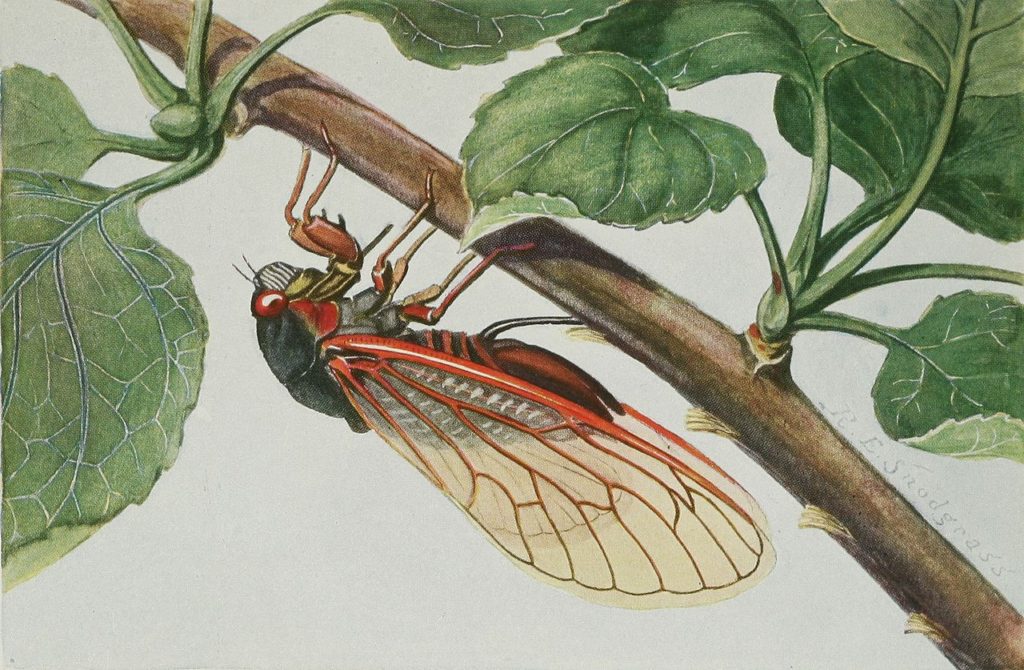 The periodical cicada (Magicicada septendecim) A female inserting eggs with her ovipositor into the under surface of an apple twig.

During the summer months, adult cicada females cut slits in the branches of deciduous forest trees and deposit their eggs. These eggs hatch six to ten weeks later and the juveniles (called nymphs) drop to the ground and dig burrows down to the tree roots. Their burrows may be up to eight feet deep! There, the nymphs feed on the xylem fluids from the roots. And as they grow, they molt.

All insects have an exoskeleton. They don’t have bones on the inside of their bodies, and instead rely on their hard outer covering to help them maintain their body shapes and protect them from danger. These exoskeletons can only stretch so much, so in order for the insect to grow, it must shed its exoskeleton through a process called molting. The new larger exoskeleton beneath it is soft at first, but quickly hardens. The period of growth between each molt is called an instar.

Cicadas spend most of their life underground. They molt five times before they turn into an adult, or imago. The nymphs live underground for the first four molts, then dig to the surface and emerge just before their final molt. When they reach the surface, the nymph crawls up a nearby plant and molts one last time emerging as an adult. The imago then flies off in search of a mate to begin the life cycle all over again.

Annual cicadas have a lifespan of two to five years. They emerge every year throughout the summer. The distinctive hum that the males produce contributes to our collective memory of summer sounds. 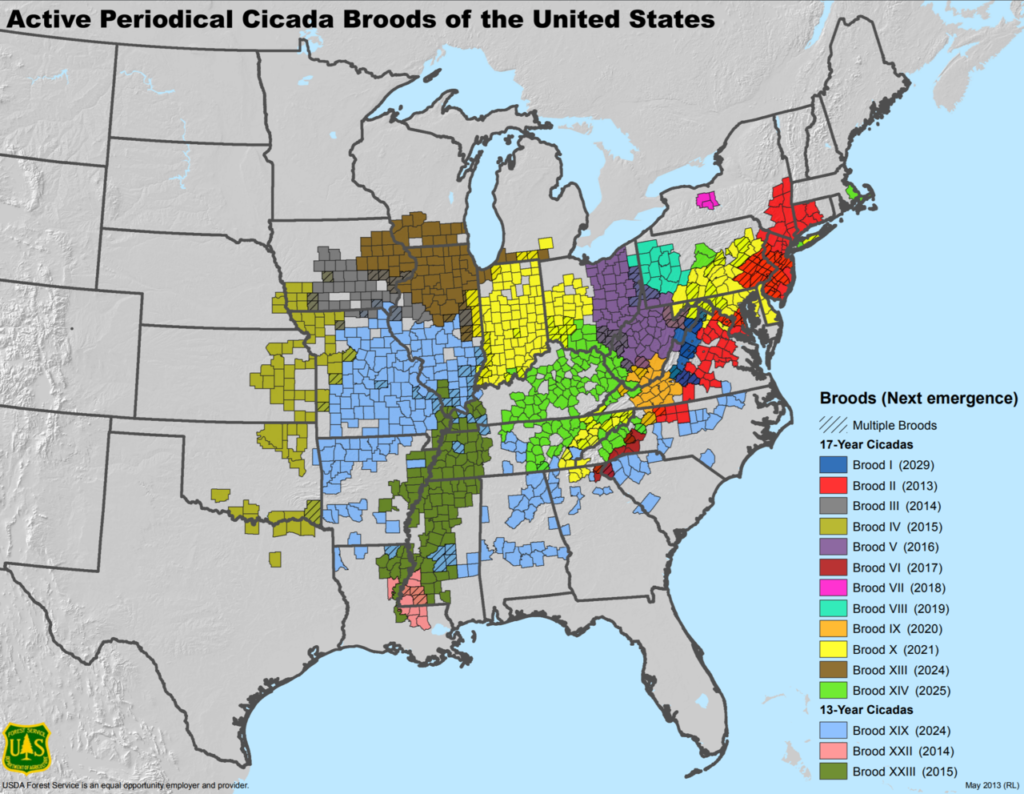 USDA Forest Service map showing, county-by-county, where periodical cicada broods of the United States are located, and when they can next be expected to emerge. Authors: Andrew M. Liebhold, Michael J. Bohne, and Rebecca L. Lilja (Public domain, via Wikimedia Commons)

Scientists break down each of these periodical species into about 15 groups that they call broods. Each brood is assigned a Roman numeral based on its location and when they emerge.

But how do these teenage insects know when it’s time to dig to the surface? They don’t have tiny little calendars or alarm clocks in their underground burrows. It turns out, they don’t keep track of time at all. Scientists have discovered that the nymphs actually count the seasonal fluids flowing through the roots on which they are feeding.

After the 13th (or 17th) flow of familiar fluid, the nymphs finally emerge on a spring evening when the soil temperature around 8 inches deep is above 64 °F. This happens between late April and early June depending on their location.

This event – when the nymphs dig to the surface to become adults and reproduce – is the biggest insect emergence on the planet. Millions of cicadas in a brood emerge at the same time. Check out this video by BBC Earth of a 17-year cicada emergence. 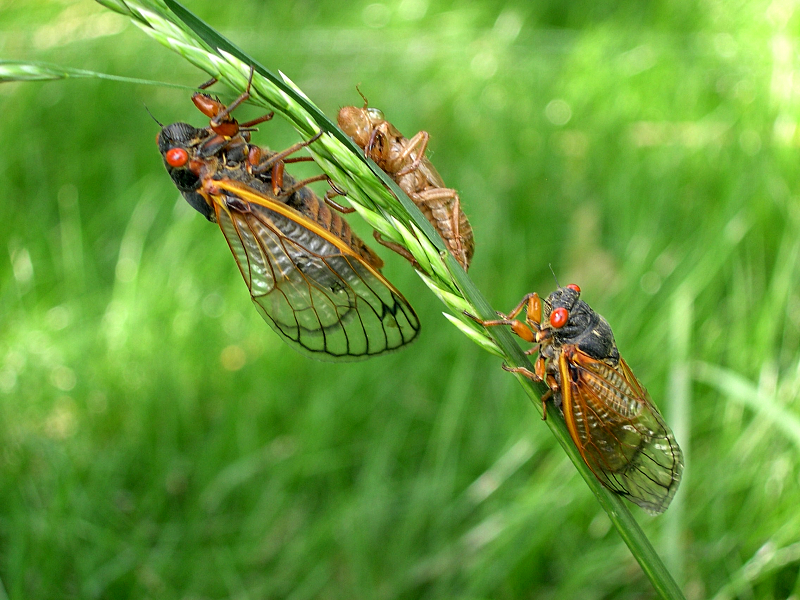 Extend the learning with the following activities.

Math
Periodical cicadas are grouped into 15 different geographic broods based on the calendar year when they emerge. Scientists have monitored their activity and have determined if they are 13- or 17-year cicadas based on their emergences.

Activity:
Print our Cicada Brood Worksheet and complete the table based on what you’ve learned about periodical cicadas and the information already provided for each brood. Note that some broods have gone extinct. You can mark them accordingly. 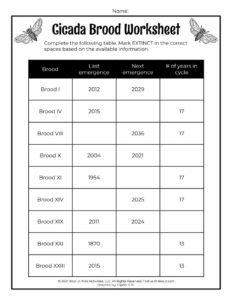 Activity: Print our Xylem Fluids Reading Passage and learn more about why the xylem is and how it works. Students my color the illustration for fun. 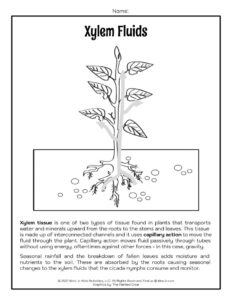 Biology
Cicadas have an important role in their ecosystem. All of the species provide food for other animals, even the periodical cicadas despite their irregular life cycle.

Activity #1: All cicada nymphs get their nutrients by drinking sap from the xylem of various species of trees. Periodical cicada nymphs feed on the xylem fluids found in the plant’s root system.

Print our Cicada Life Cycle Worksheet and have your students label the different stages of the cicada’s life cycle based on what they’ve learned in the article above. 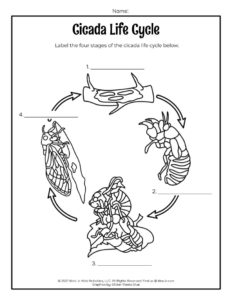 Activity #2: Print our Periodical Cicada Predators Activity Sheet and have your students cut out the squares and glue them on to a separate piece of paper, matching the image with the correct label. 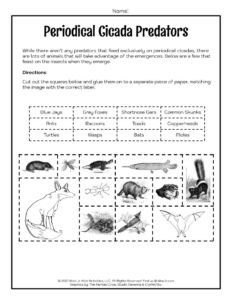 Citizen science is a way for the public to help contribute to science through observations and recording data. There are a LOT of active citizen science projects going on around the country… and the world.

Activity: Visit Radiolab’s Cicada Tracker to help scientists monitor cicada emergences, especially if you live in the same area as any of the active broods. Encourage your students to spend time outside this spring and summer and to record emergences that they observe.

Other mini lessons that may interest you: