I’m kicking off my Christmas in July series this Friday with my infamous finger puppets! I actually made these last December, but got so busy during the Christmas season that I didn’t have time to post them. I admit I really don’t like seeing Christmas stuff in stores in the summer, but I actually saw a Christmas aisle in my local Hobby Lobby at the beginning of JUNE – so technically I’m kind of late, right?!

What’s even stranger is that I’m headed out to the pool when I’m done putting up this post – if you really think hard about Christmas in July, it kind of fries your brain!

I’ve placed a photograph next to each finger puppet with the exact materials needed for each Christmas critter. All of them require a very easy to find set of stuff:

How to Make These Christmas Finger Puppet Crafts 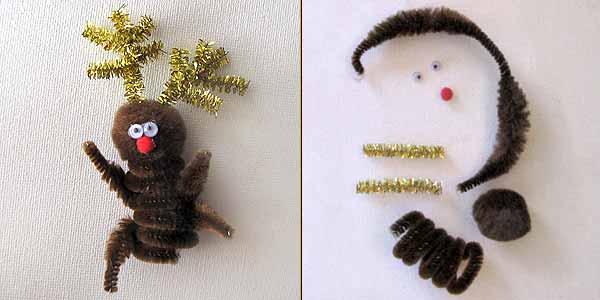 You will actually need six of those 1.5 inch pieces of gold pipe cleaners!

Wind the finger puppet base.

Twist two sections of gold pipe cleaner around one piece to make each antler. Glue them into the top of the brown pom pom head.

Glue the red mini pom pom and googly eyes onto the face. Gluing the nose first will make gluing those tiny googly eyes a little easier, as they will have something to rest on.

Glue Rudolph’s head onto the puppet body base.

Cut the varied width brown pipe cleaner in half – you will only need one section per set of two legs.

Slide each pair of legs between the body coils. 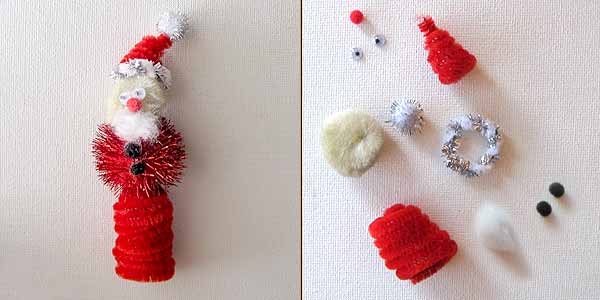 Wind the puppet base.

Twist a 5 inch (approx) piece of red pipe cleaner into a cone shape for Santa’s hat. Use a pencil tip like the one in this 4th of July Statue of Liberty finger puppet. Twist two 2.5 inch pieces of white and silver pipe cleaner together, then into a circle for the brim of Santa’s hat. Glue the silver pom pom onto the cone top, and the brim onto the cone bottom, then glue the hat onto the tan pom pom.

Glue his red nose on first, then his googly eyes, and then glue his head onto the red glitter pom pom body. Cut a white pom pom in half for Santa’s beard, and glue it on after the head has been attached, because you need to glue it to both his face and body.

Glue the two tiny back pom poms onto Santa’s ‘coat’.

Glue Santa to the finger puppet base. 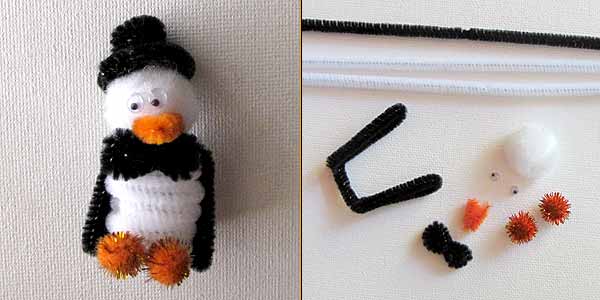 Wind the puppet body base.

To make Mr. Penguin’s top hat, wind a black pipe cleaner around a pencil as shown. Do the first three rows next to each other, then the next three rows on top of each other: 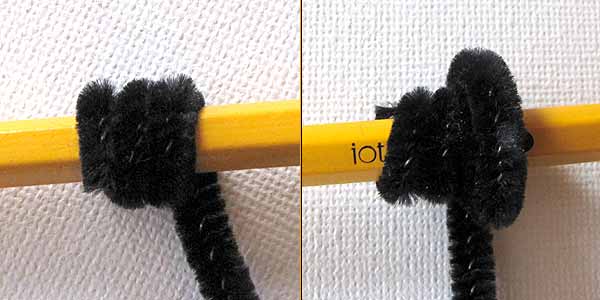 To make his wings, bend an 8 inch piece of pipe cleaner into kind of a U shape as shown in the picture above.

To make his bow tie, bend a 2.5 inch piece of pipe cleaner into kind of a connected X shape as shown in the picture above.

To make his beak, simply bend a 3/4 inch piece of orange pipe cleaner in half.

Glue the beak onto his pom pom face, then glue on the googly eyes. Next, glue his top hat on.

Glue his head onto the puppet base, then glue his bow tie underneath his head and beak.

Slide his wings in between the body coils and then glue the two medium orange glitter pom poms on the bottom front for his feet. 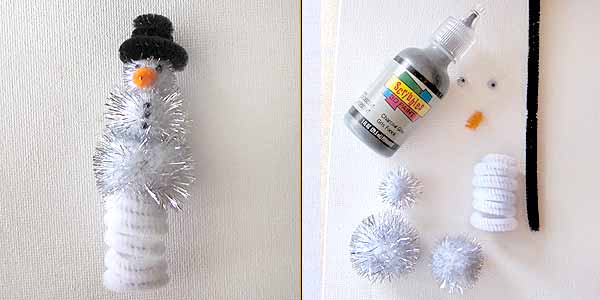 Wind the puppet base.

Make the black top hat as shown above on the Mr. Penguin finger puppet craft.

Glue the nose onto his face, then his googly eyes. Since the top pom pom is pretty small, you may want to make his eyes with the black fabric paint instead.

Paint three small buttons onto his body (even the mini pom poms are too big for this).

Glue Frosty onto the puppet base. 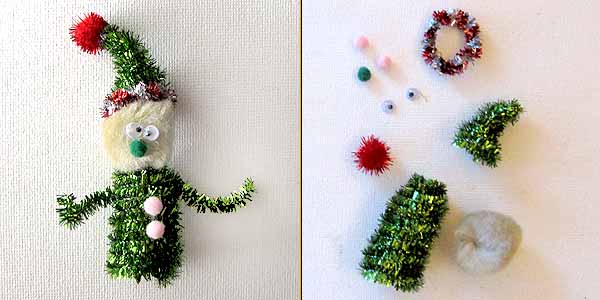 OOPS – you will also need a 3 inch piece of green pipe cleaner for his arms!

Wind the puppet body base. When using glitter pipe cleaners you MUST use two of them for the body base – they are too thin!

Make the elf hat as instructed for Santa’s hat above, using the colors shown here.

Glue the mini pom pom nose and googly eyes onto his pom pom face, then glue on the hat.

Glue his head onto the body base.

Bend the 3 inch piece of green pipe cleaner into arms as shown, and slip them in between the body coils.

Glue the two pink mini pom poms onto his body for buttons. 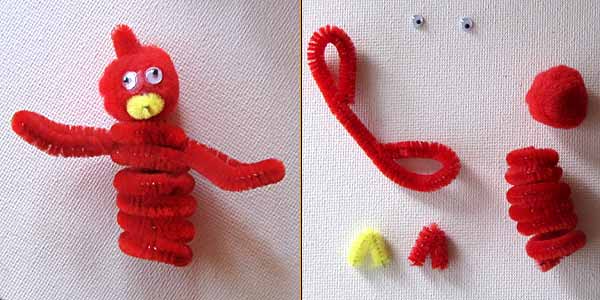 Wind the puppet body base.

Glue the red V shaped feather onto the top of the cardinal’s head, then glue the yellow V shaped beak onto his face.

Glue the googly eyes on top of the beak.

Bend the wings out of a 6 inch piece of red pipe cleaner as shown.

Glue the head onto the body base, and then slide the wings in between the body coils.