What is Chinese New Year?

Also known as “Spring Festival” (or Chunjie in Chinese) as it is called in China, Chinese New Year is a holiday marking the beginning of the new year according to the lunar calendar. It is, in fact, the most important holiday in the country. Because it is based on the lunar calendar, the exact date changes from year to year. So it may be celebrated anytime from January 21 to February 20. This year, the holiday falls on February 5th. This Chinese New Year for kids unit provides worksheets, coloring pages, and activity ideas to learn more about this holiday that is one of the most widely celebrated across the entire world. 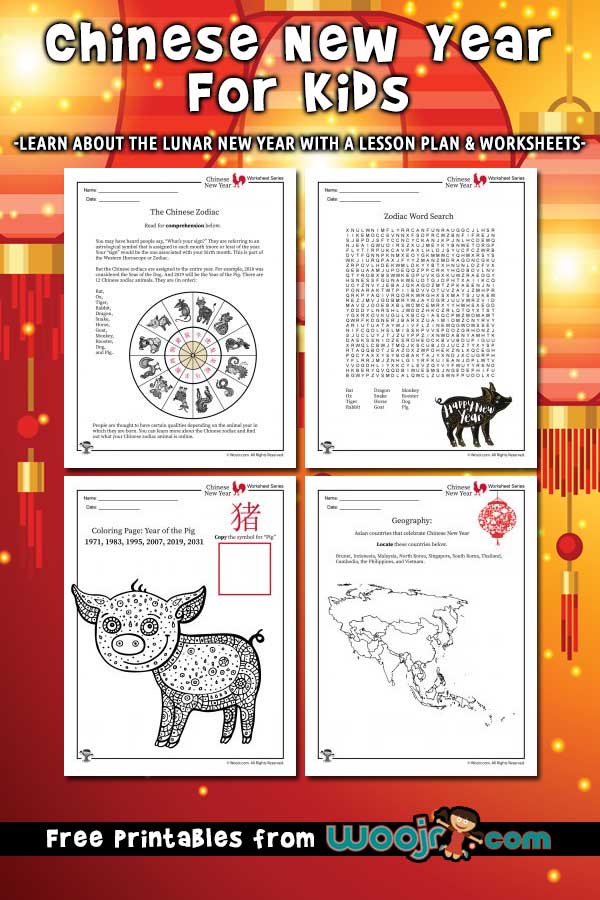 Although it is most closely associated with China, many other Asian countries – as well as countries with large Asian populations (such as the United States, Canada, and Australia) – also celebrate this holiday.

The celebration begins with the family reunion dinner on New Year’s Eve and ends with the Lantern Festival. In the month leading up to Chinese New Year, people spend a lot of time getting ready for it. Families stock up on food because the holiday lasts for 15 days and you are supposed to spend much of it with family. In fact, you aren’t supposed to go out until the fifth day! So snacks and food and small gifts for the family are very popular.

And as with most New Year holidays around the world, there is a focus on leaving bad fortune behind and welcoming a new year of good health, prosperity, and happiness. So many people buy new clothes to wear during the festival, as torn or stained clothing is considered unlucky. In addition, the food people eat during the holiday also is significant and is chosen for its symbolism. Long skinny noodles may represent longevity, while vegetables might be cut into the shapes of coins for prosperity. Other foods are chosen because their name sounds like another luckier word or phrase.

Some of the most influential things – the color red and firecrackers! – having to do with Chinese New Year find their beginnings in an ancient legend about a mythical monster named Nian. It lived beneath the sea (or in the mountains, depending on where in China you lived). Every year, he would go to a village to eat their crops and sometimes the villagers themselves! But Nian had several weaknesses: a sensitivity to loud noises, fire, and a fear of the color red. So people began to burn bamboo and hang red signs. That’s why today, fireworks are an essential part of the holiday. It’s also why the color red is most closely associated with Chinese New Year! Here are some examples: 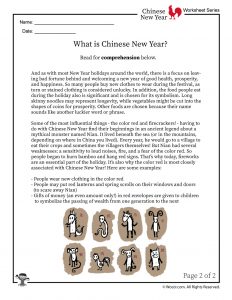 What is Chinese New Year Reading 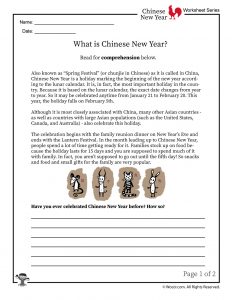 What is Chinese New Year Worksheet 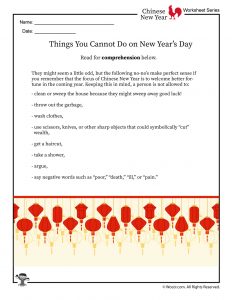 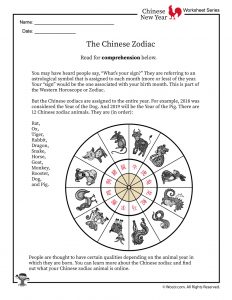 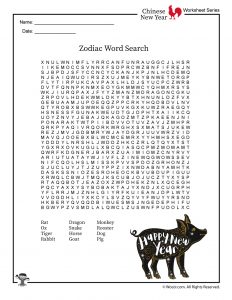 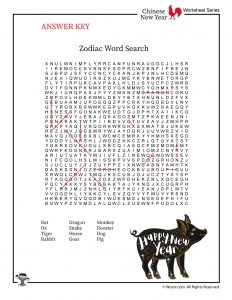 Things You Cannot Do on New Year’s Day

They might seem a little odd, but the following no-no’s make perfect sense if you remember that the focus of Chinese New Year is to welcome better fortune in the coming year. Keeping this in mind, a person is not allowed to:

You may have heard people say, “What’s your sign?” They are referring to an astrological symbol that is assigned to each month (more or less) of the year. Your “sign” would be the one associated with your birth month. This is part of the Western Horoscope or Zodiac.

People are thought to have certain qualities depending on the animal year in which they are born. You can learn more about the Chinese zodiac and find out what your Chinese zodiac animal is here. 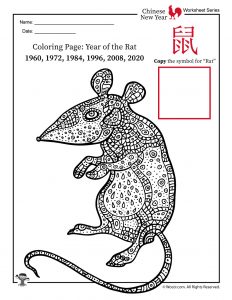 Year of the Rat Coloring Page 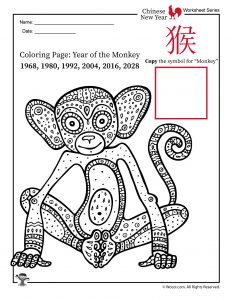 Year of the Monkey Coloring Page 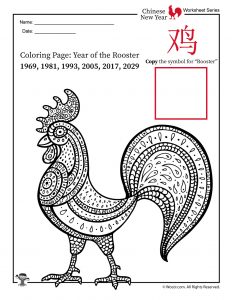 Year of the Rooster Coloring Page 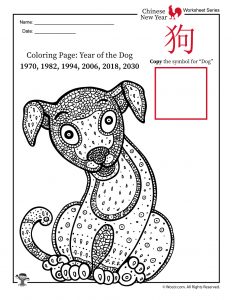 Year of the Dog Coloring Page 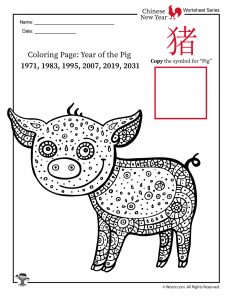 Year of the Pig Coloring Page 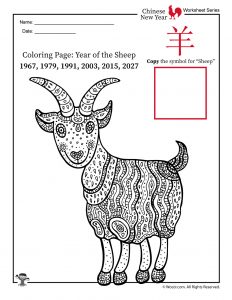 Year of the Sheep Coloring Page 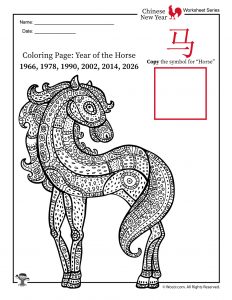 Year of the Horse Coloring Page 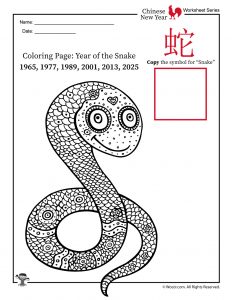 Year of the Snake Coloring Page 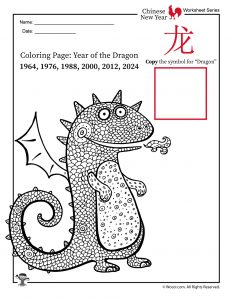 Year of the Dragon Coloring Page 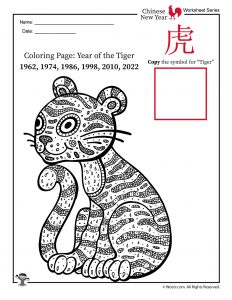 Year of the Tiger Coloring Page 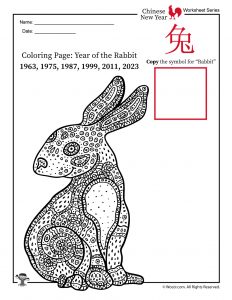 Year of the Rabbit Coloring Page 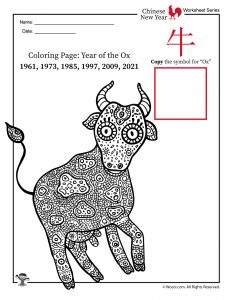 Year of the Ox Coloring Page

Have your students watch this video and this one about the legend of Nian. In the videos, the villagers hang red banners, some with poetry, outside their homes to scare off the mythical beast. Read more about spring couplets here.

Chinese New Year is celebrating in many countries, not just China.

Activity: Print our world maps and have your students label the countries that celebrate Chinese New Year using the list in the word bank on the worksheet. Let them use a world atlas to help them locate the countries if necessary. 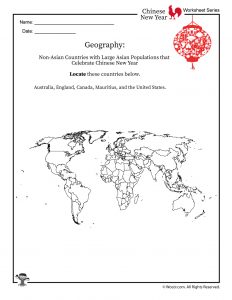 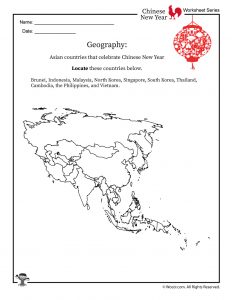 During the Gold Rush era in the 1850’s, many Chinese immigrated to the United States. A large number of them settled in the San Francisco area to work in the gold mines and on the railroad. They established a thriving community and by 1860, the Chinese decided to display their culture to help educate others. They decided to merge their festive holiday with an American tradition: the parade. Today, San Francisco claims to have the largest Chinese New Year parade celebration outside of Asia. It takes place at night, and includes spectacular floats. But perhaps, most intriguing is the 288 foot long Golden Dragon, which requires a team of more than 180 people to carry it!

Activity: Visit ChineseParade.com to learn more about this remarkable parade, then have your students create their own Golden Dragon by having them draw and color in a dragon head and tail on poster paper, then connect the two ends by taping together red plastic tablecloths from the dollar store. Use as many tablecloths as it takes for all of your students to fit under it.