Oh. My. God. I discovered this weekend that carving artificial pumpkins is totally flipping addicting!

I’ve always loved carving real pumpkins, but never really got adventurous with the designs, knowing that the thing would be mush in a week or so. I recently found some artificial pumpkins on sale, picked up a few, and suddenly I found myself carving pumpkins non-stop! If you aren’t familiar with these fake pumpkins, they are made with a solid type of foam that make them both carvable and realistic looking. They come in several shapes and sizes, and even color variations, including white pumpkins. 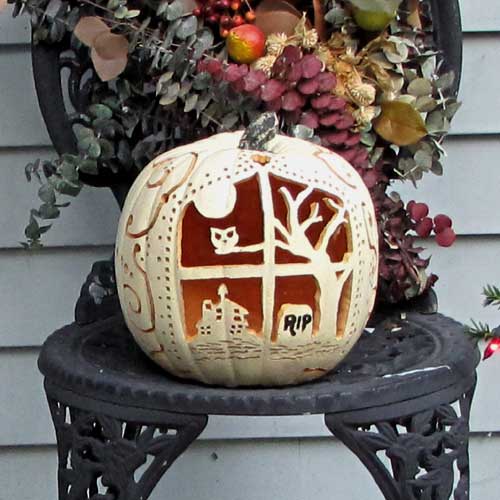 I started out with one of my little pumpkins to get an idea of what it was like to work with the material. For the most part, it was just like carving a real pumpkin, which as we know can be a bit challenging sometimes. The foam is thick and requires as much pressure to cut it as a real pumpkin. 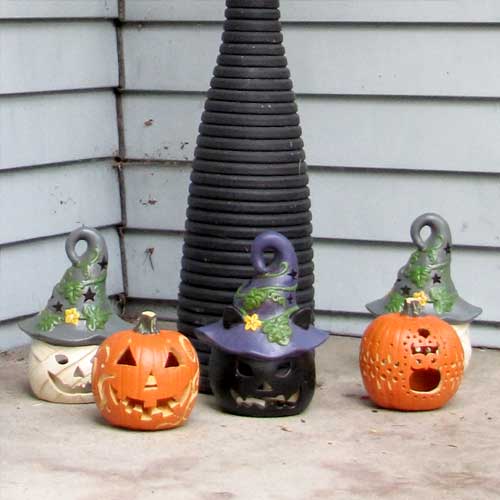 The tools I used at first was a very cheap wood carving set, which for this kind of job, worked just fine. They made perfect little squares and circles, and sliced through patterns pretty well. A little saw might have been better for longer cuts, but most of the stuff I was working on were small, short cuts. I experimented with carving out only the skin of the pumpkin, leaving the “flesh” intact. That turned out OK, but the foam looked pretty ragged.

But then my husband brought out the Dremel power carving tool and it was like a hit of crack, I swear to you! I still needed the carving tools to make the small squares, but the Dremel was my new tool of choice.

That is, until I started making mistakes with the Dremel. Mistakes that were hard to fix and that started to tick me off.

Some of the mistakes I made with the Dremel might just have been because I didn’t have the right drill bit to use. But regardless, it’s pretty hard to get into tight angled corners with a round cutting bit. You get ‘sloppy’ corners that don’t look like they are supposed to: 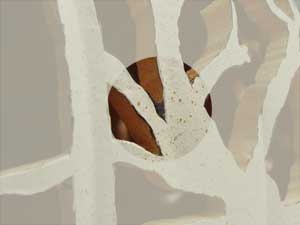 Cutting corners with a Dremel

The way to get sharp corners is to go back in with a straight carving tool and carefully clip out the remnants that the Dremel left behind. Easy peasy.

I noticed that sometimes the dremel breezed through the foam pumpkin, but left behind some frayed paint coating like this: 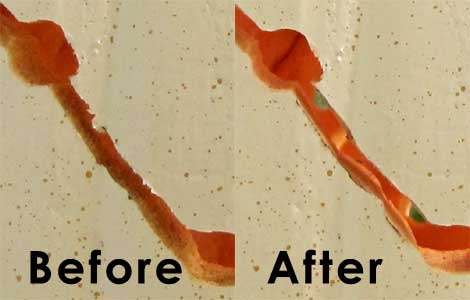 Frayed Edges on the Funkin from Dremel cutting

The way to get rid of it was to go back with a sanding bit and clear away the flakes of paint. DO NOT peel them off, because they will peel away from the part of the pumpkin you want to stay intact!

Ragged Cuts in the Artificial Pumpkin

Once that sanding bit came out, it was hard to stop. I was able to clean up a lot of my mistakes with it. Rememer the ragged cuts in the foam I got from the wood carving tools? Smooth as can be with the sanding tool. Plus it made it look much more realistic instead of bad exposed foam: 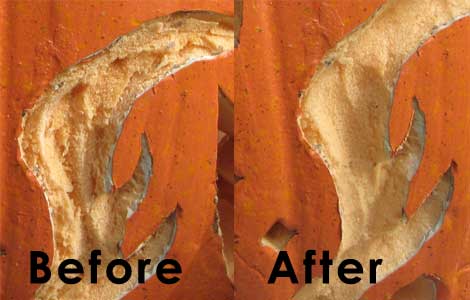 Jagged Cuts in the Artificial Pumpkin

The most frustrating part was when I didn’t hold onto the Dremel hard enough and it went awry on me. That sucked. So instead of letting it ruin the pumpkin pattern, I incorporated the mistakes into my design.

I started making swirls on the sides of the pumpkin, with the intention of the ends looking clean like they did in this first shot. But then the Dremel made a big hole on the end of the swirl like in the second shot: 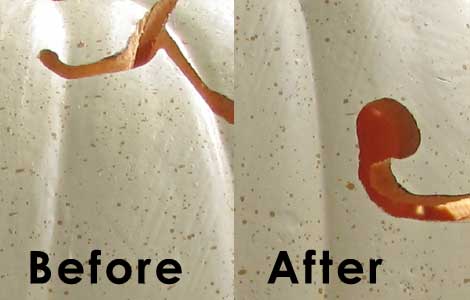 So I could have made all of the swirls wider, which would have been a huge pain. Instead I just went back and added random ‘dots’ to the swirls, to make it look like they were there on purpose. I liked that look better in the end, anyway! 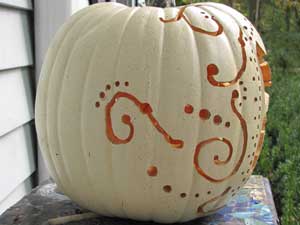 But the one thing I couldn’t fix this way was that one of my more fragile carvings broke right off.

My attachment point was t-i-n-y, so I had to use something very thin to attach the pieces together. A toothpick would work if I had a little more width to work with. But I didn’t, so instead I used two small segments of floral wire. I stuck them into both ends, and gently pushed them together. I found out the hard way that Funkins are stronger than skin, and in my first attempt the wire shot right into the end of my thumb. OUCH. So please be careful with this step!

Some of the paint chipped when the part broke off, so I touched up the seam with a little bit of off white paint. I’ve zoomed in very closely in this photo, but you can’t really see the fix if you’re standing and just looking at the pumpkin.

I have a lot of posts of pumpkin stencils I’ve drawn myself or hacked out of clip art:

Day of the Dead Pumpkin Stencils