Have you traveled to another part of the country, or the world? Perhaps you’ve seen pictures of the Sahara Desert, a coral reef, African grasslands teeming with wildlife, or the Rocky Mountains. Have you noticed things about the natural world in these places that are different from where you live? Perhaps there is more or less plant life, or different types of animals. This diversity is part of what makes our home planet unique and interesting. In this unit, you’ll learn about biomes — like deserts, oceans, and grasslands — and why they’re both important and fun to study. And scroll down for some biomes worksheets for the classroom, too! 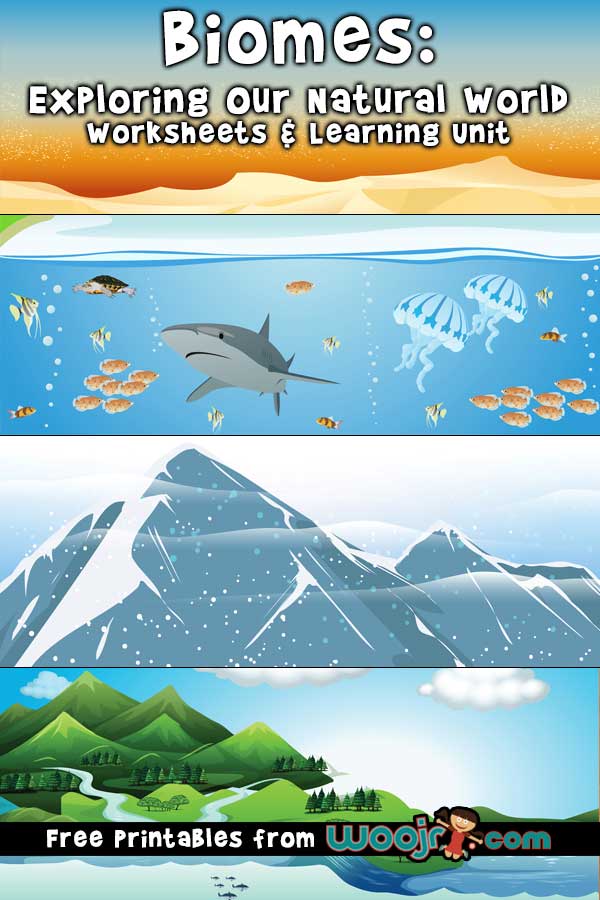 First, some biome basics; think of these definitions as going from broader to narrower in scope, like a series of egg-shaped nesting dolls:

Biosphere is the scientific term for all of the living elements and their environments on our planet, from the earth’s crust up into the inner atmosphere.

A biome is a major community of animals and plants living in a unique physical environment and climate. Biomes are often characterized by their predominant plant life and precipitation (rainfall).

An ecosystem is everything that co-exists within a given environment. An ecosystem can exist within a biome, and can be as small as a tidal pool or as large as most of a continent.

A population of plants or animals refers to the total number of a given type or species living in the same area, like a herd of bison or a pride of lions living in one region.

An adaptation occurs when a plant or animal changes its behavior or physical features in order to better survive within its environment.

There are three general types of forest biomes: tropical, temperate, and taiga. A forest biome has many tall trees concentrated in a large area.

Climate Conditions – Tropical forests tend to be closer to the equator and have much more rainfall than temperate forests, and most exist south of the equator. Temperate forests have less extreme temperature changes and are neither too hot nor too cold throughout the year. Taiga forests (all called coniferous forests for the fir trees that thrive there) have the coldest temperatures and least rainfall.

Plant Life – The abundant rainfall of tropical forests allows plants to flourish. The more moderate temperature shifts within temperate and taiga forests allow trees to grow very tall over many seasons. Trees in temperate forests tend to shed their leaves in the fall, where the “evergreen” coniferous trees in the taiga keep their needle-like leaves year-round.

A grassland biome is a large area of land with tall grasses and shrubs, with few trees.

Climate Conditions – There are a few sub-categories of grasslands named for their region and/or average temperature. For example, a prairie is a temperate (cool, dry weather) grassland, and a savanna is a tropical (hot, moist weather) grassland. Prairie grasslands cover a large portion of middle United States. In South America, grassland regions are called pampas, and in Asia they are known as steppes.

Plant Life – As the name suggests, grasslands are known for grasses that grow there, with fewer trees by comparison. Unlike the soft, short green grass of a typical suburban or urban yard, prairie and savanna grasses tend to be coarse and tall, designed to withstand wind and a lack of rain. There is a wide variety of grasses that grow in grasslands around the world, depending on the amount of rainfall in a given area.

This is the coldest biome aside from polar deserts; a harsh, treeless environment with very low temperatures. Tundra biomes exist at both high altitudes near mountaintops and close to the Arctic Circle. Summers are very short and winters are very long in the tundra.

Climate Conditions – It’s so cold in a tundra environment that the top layer of soil is frozen year-round, known as permafrost.

Animal Life – Many animals migrate from the tundra for the winter, returning for the short summer season, including mosquitoes, birds like snowy owls and ptarmigans, and caribou. Some animals remain year-round and even change the color of their fur from brown to white, including the arctic hare and arctic fox.

Did you know that a lack of rain (less than ten inches per year), rather than temperature, is what makes a desert biome? While most of us imagine blistering sunlight, cacti, and sand dunes, both Antarctica and the North Pole are also considered deserts due to their lack of annual rainfall.

Climate Conditions – Deserts are very dry and tend to be hot and/or sunny during the day and very cold at night.

Plant Life – The cactus is a quintessential desert plant, with sharp needles designed to protect them from animals. Some grasses and shrubs also grow in deserts. Trees that grow in deserts are not very tall, and have root systems that extend deep below the surface in order to conserve water.

Animal Life – Most desert animals are nocturnal, an adaptation allowing them to escape the daytime sun and heat. Common desert animals include: Burrowing owls (which nest underground), camels, and snakes.

This biome is a large body of water with a high salt content. Coral reefs are a subset of this biome.

This biome contains water that has far less salt content compared to an ocean. Freshwaters biomes include: Rivers, streams, ponds, and lakes. Wetlands are a combination of freshwater and land, such as a bog or marsh.

Plant Life – Water lilies are a common lake plant, and a wide variety of grasses grow near rivers and streams.

Human activity around the world can have serious impacts on biomes. It’s important to understand and develop sustainable practices — actions we can take that prevent excess damage or loss of natural resources — can allow each biome to thrive. Common threats to our biosphere include: Pollution, deforestation (cutting down massive amounts of trees in a forest), mining, over-fishing/over-hunting (taking animals for human use without allowing a population to recover from those losses), and poaching (illegal hunting endangered or rare animals). 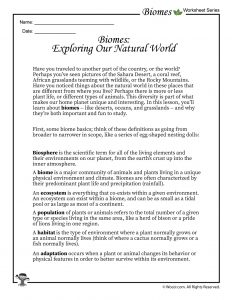 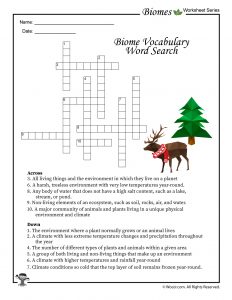 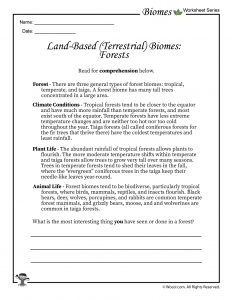 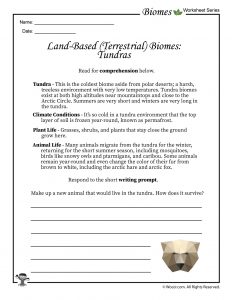 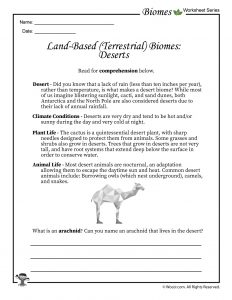 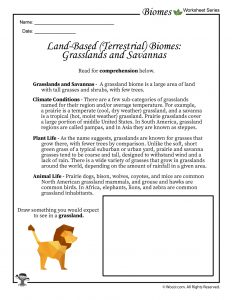 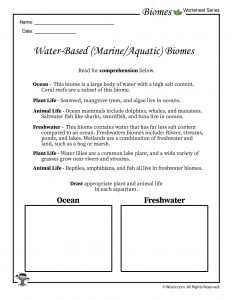 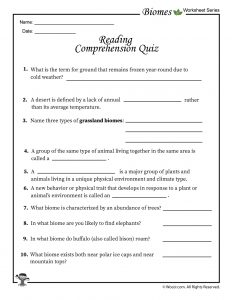 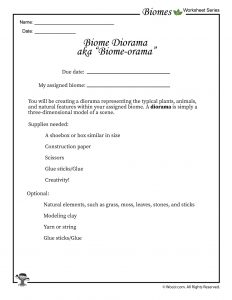 Give each biome a number from 1-8 (tropical forest, temperate forest, taiga forest, tundra, desert, grassland, ocean, freshwater). Assign a biome number to each student and have them create a diorama representing the typical plants, animals, and natural features within that biome. 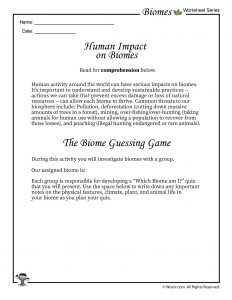 Divide the class into groups, one for each type of biome you’d like to cover (tropical forest, temperate forest, taiga forest, tundra, desert, grassland, ocean, freshwater).
Have each group research the physical features, climate, and plant and animal life for their biome.
Each group is responsible for developing “Which Biome am I?” quiz questions about their biome, i.e., “I get less rainfall each year than any other biome, which biome am I?”
Have students refrain from guessing until each member of the group has the opportunity to present a question.