Here’s the latest addition to our printable kids poems series – April Fools Day poems! I’m not a fan of pranks, only because I tend to be more gullible than I like to admit. But there have been some really great hoaxes pulled in the past. One of the most famous April Fool’s Day hoaxes was carried out in 1957. The BBC television news show, Panorama, announced that Swiss farmers had grown a wonderful “spaghetti crop” and showed a video of them picking spaghetti from trees! In 1998, Burger King advertised its new Left-Handed Whopper on April Fool’s Day, saying that all of the condiments were placed especially for the left-handed eater. Both of these practical jokes fooled tons of people! 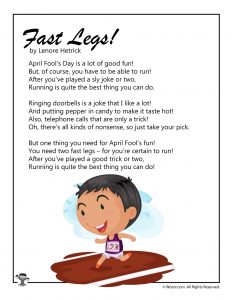 Too Many April Fools Choices Poem 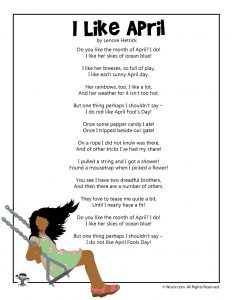 I Like April (But Not April Fool’s Day) Kids Poem

Check out all of our spring kids activities while you are here!

Download all 200+ poems as a bundled PDF right here!