The Language of Poetry

Did you know that poetry is one of the oldest forms of writing? The Epic of Gilgamesh is an epic poem written sometime between 2100-1200 BCE in ancient Mesopotamia. It’s regarded as the earliest surviving form of literature.

Poetry takes MANY forms. This mini lesson explores some of the different types of poetry and is for children ages 9 to 12. 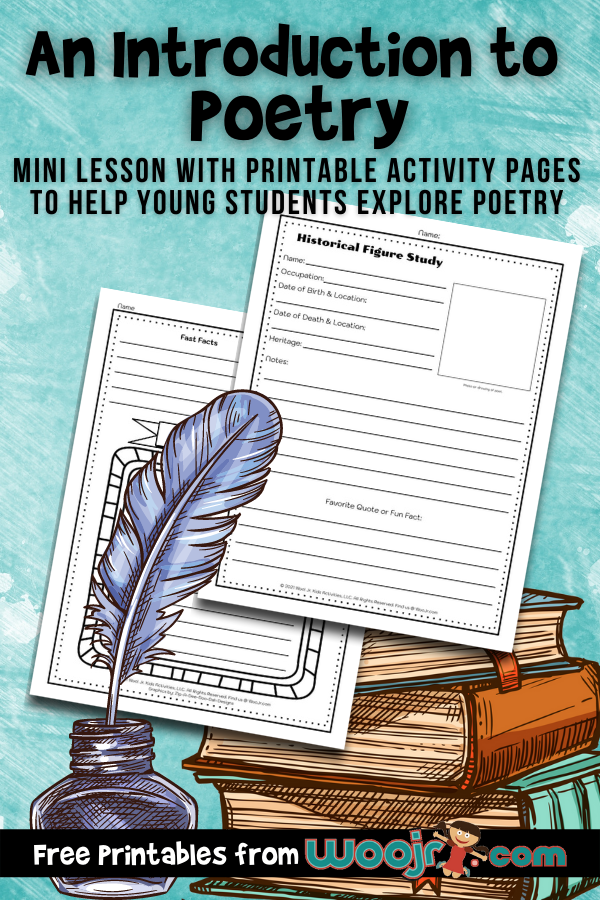 Poetry exists in many forms. Some poems rhyme. Others do not. Some poems have a repetitive pattern. Some flow freely. Most poems follow some sort of rules for rhyme, rhythm, or meter. Typically, poems use imagery to elicit strong emotion in their reader.

Poets might take a few minutes to write a poem. Or it may take them months or even years to perfect it. They meticulously whittle away at words until they have the right combination. And unlike a book or story, unnecessary words are left out.

Before we learn about types of poetry, we must understand some of its basic elements.

Many types of poems follow a rhyme scheme. This is the pattern of lines ending with rhyming words in a stanza or poem. They may be described as being AABB or ABAB or AABBA, but there are many, many combinations.

Most poems are made up of stanzas. A stanza is a group of lines forming the basic recurring metrical unit in a poem. It’s also called a verse! Stanzas are often recognized by the number of lines they contain. Couplets (2 lines), quatrain (4 lines), and cinquains (5 lines) are a few examples.

Most readers recognize a poem by its meter. The meter of a poem is its rhythm or the rhythmic pattern of its syllables. Rhythm created by the number of syllables is known as quantitative meter. Rhythm that is created by the placement of stressed and unstressed syllables within the stanzas is called qualitative meter. 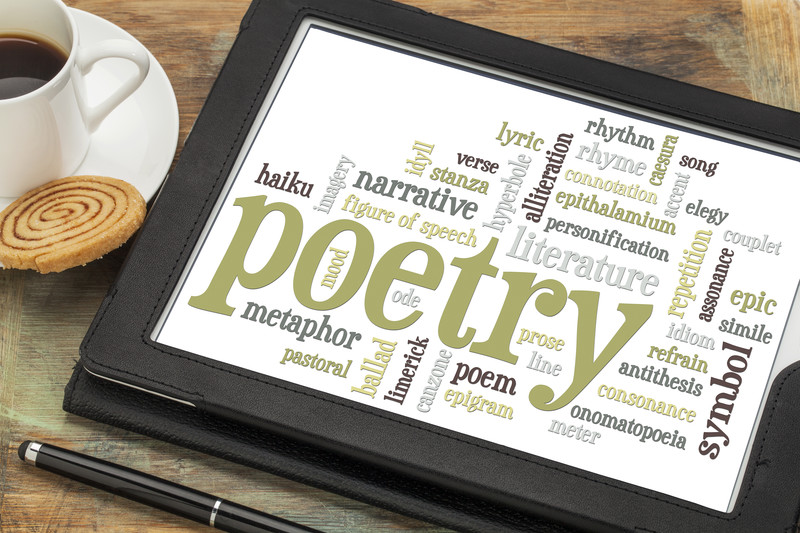 Oftentimes, the subject of a poem determines what type of poem the poet writes. However, some poets prefer one or two types.

Poetry exists all around the world and in almost every culture. Below is a sampling of the different types of poems found in world literature. But there are many, many more! 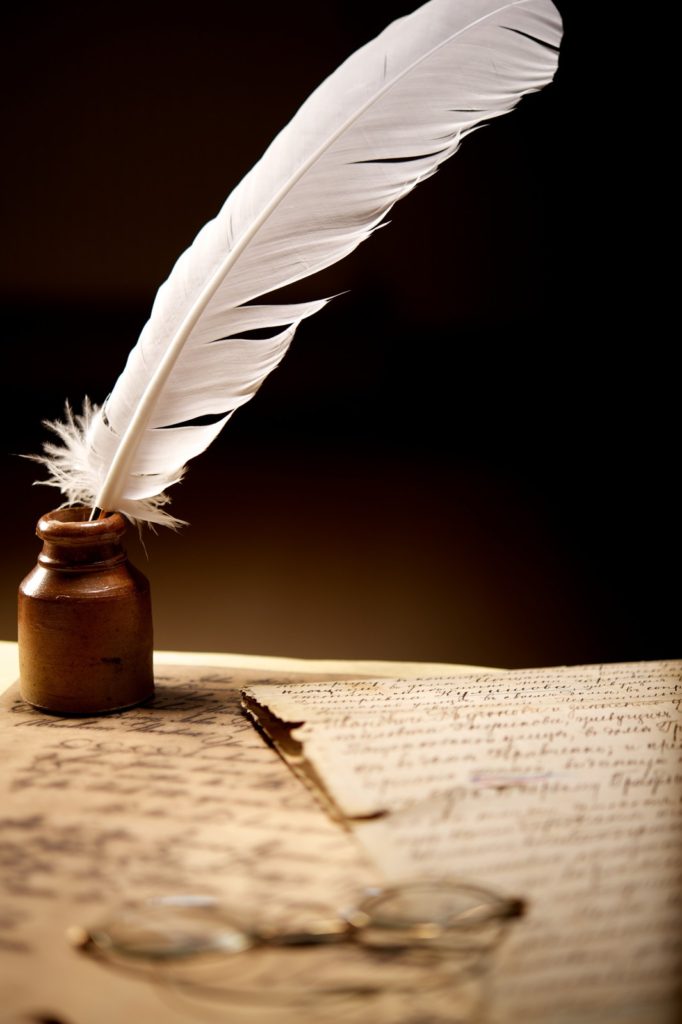 Activities for learning about poetry

Here are some of our printable resources to help your young students explore poetry. Be sure to check out our hundreds of free printable poems for kids to read!

Most songs are forms of poetry. In fact, the word “lyrics” describes the words (verses and chorus) that make up a song.

Activity #1:
Print our Poetry in Music Worksheet. Find three contemporary songs and write down the lyrics. See if you can determine which type of poetry is used. 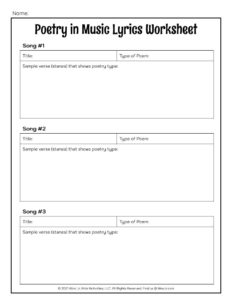 Activity #2:
Print our Song Lyrics Page and write your own song. Be sure to choose a specific form of poetry before you begin. Try to follow the rules of rhyme scheme, rhythm, and/or meter, if they apply. 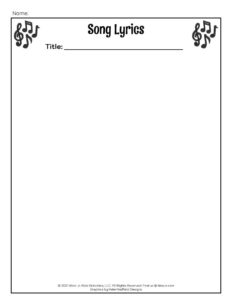 Research (History & Language Arts)
Poets themselves often lead interesting lives. And they themselves are often the subjects of books.

Activity:
Print our Poet Research Pages. Choose your favorite poet (or pick someone new). Research their life and write a short essay about him or her. 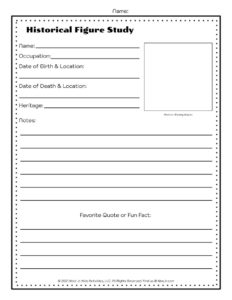 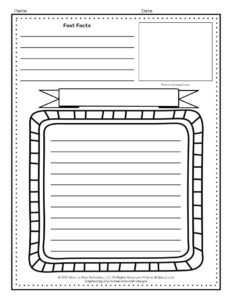 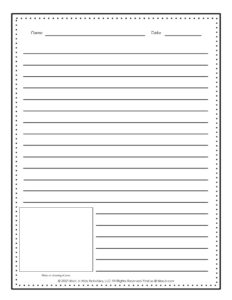 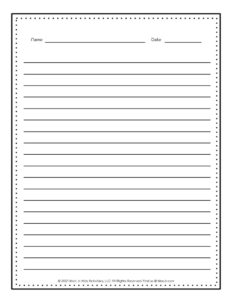 We listed a handful of different types of poetry. However, many other forms exist throughout literature and the world. Tanka poetry is one example.

Tanka poems are short, lyrical poems or songs made up of 31 syllables originally written in one long line. Today, though, tanka poems are written with five lines and the following syllable count: 5-7-5-7-7. This type of poetry was developed in Japan twelve hundred years ago, but is now popular around the world. Here is a sample tanka:

My birthday is here.
Wack! The piñata falls hard
And candy rolls out.
My mouth waters heavily
As my fingers grab wildly!

Activity:
Print our Tanka Poem Worksheet and try your hand at writing a couple of tanka poems! 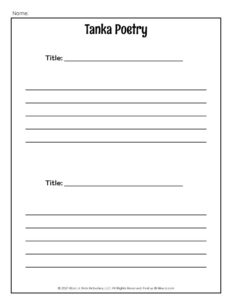