Within this lesson we will explore the types of cells, their parts and their functions. Join us in an introduction to cells lesson. 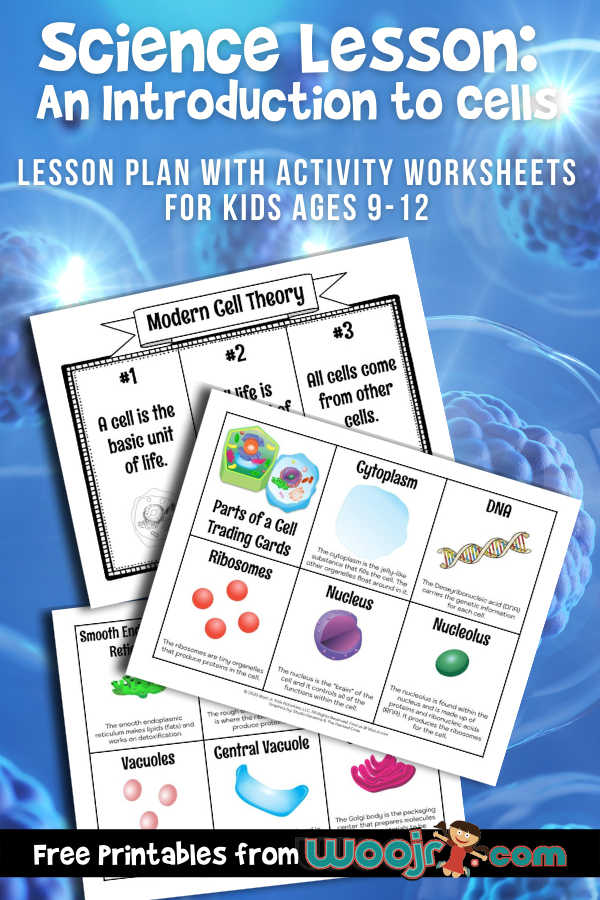 Check out this cell model craft project, which would be a perfect part of a science project on cells!

Introduction to Cells Lesson – What are They?

Every living thing on earth is made up of cells. They are the small building blocks of life. Plants, animals, fungi, and even bacteria are all made of one or more cells.

Cells are the basis of our organs, skin, hair, blood…everything! Cells can have different jobs. Groups of cells that do the same job make up different parts of our bodies. For example, in our bones, there are groups of cells that make up the hard bone surface, while another group makes up the bone marrow. 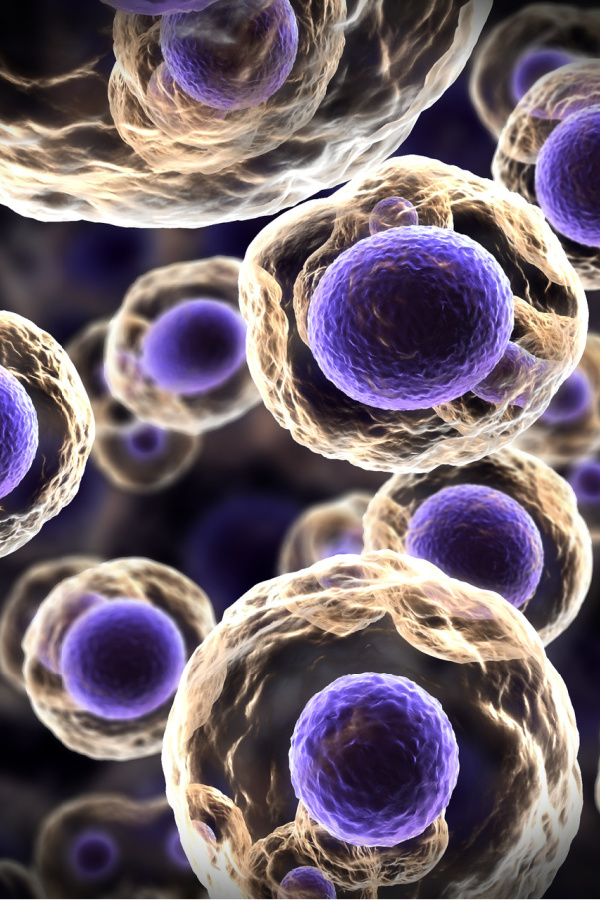 There are two types of cells: prokaryotic and eukaryotic. Prokaryotic cells are very simple. They don’t have a cell nucleus or any specific organelles. All they carry inside is a simple strand of DNA. Prokaryotes (the actual organism) are single-celled organisms. They include bacteria and another group called archaea (this last one is a group of single-celled organisms that love to live in extreme environments such as freezing, acidic, super salty, etc.)

But most living things tend to be eukaryotes. Eukaryotic cells are single or multi-celled organisms, such as plants, animals, fungi, and protists. They have a nucleus and membrane-bound organelles. Organelles are tiny structures found inside the cell that have specific jobs, such as the nucleus, vacuoles, mitochondria, chloroplast, etc. 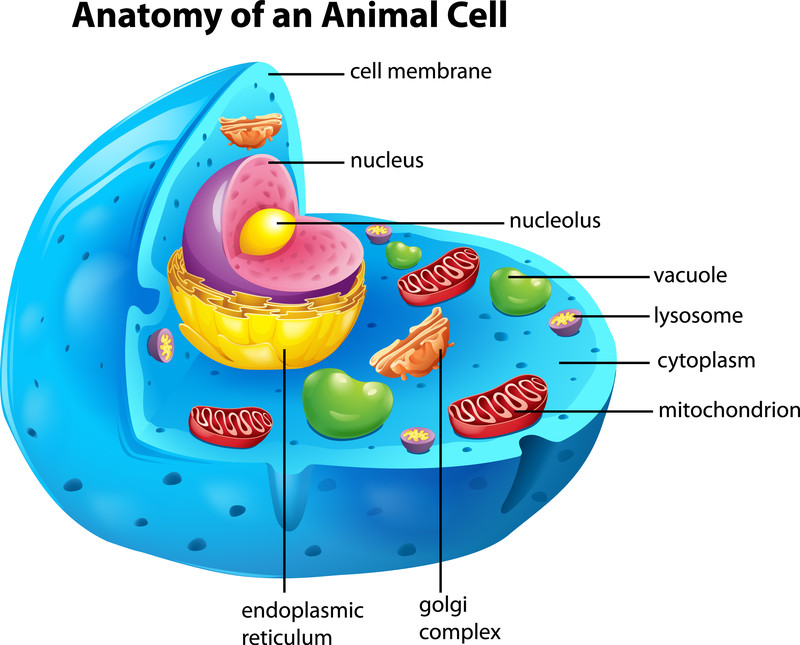 What are the parts found in ALL cells?

First, let’s take a quick look at what all cells have.

Both types of cells mentioned above have a cell membrane. It is what holds everything inside the cell and controls what enters and leaves the cell. The cell membrane itself is more developed in certain eukaryotes, but more about that later.

Next, they all have cytoplasm. This is the gel-like fluid that fills the cell. In eukaryotic cells, it is what all the organelles float around in.

Both also have ribosomes, which are little organelles that produce proteins. These proteins turn around and transport molecules or transmit messages.

And this is where the similarities end because eukaryotic cells are much more complex with a lot of moving parts. Here are the main organelles found inside them.

The main organelles in eukaryotic cells.

The nucleus is sort of like the cell’s brain. It controls most of the action happening inside the cell. For instance, it tells the cell when to reproduce and when to store or release energy. It is not usually right in the middle of a cell, but it is never up against the cell wall, which would be a little dangerous if the cell were to get damaged. The nucleus also contains most of the cell’s genetic material and it houses the nucleolus.

The nucleolus produces ribosomes, which can be called the workers of the cell.

Ribosomes play an important role in producing proteins within the cell. It’s important to point out that ribosomes are not stuck inside the cell membrane like the other organelles. They are tiny organelles that can pass through the membrane to deliver information to other cells.

The endoplasmic reticulum (ER) transports materials (such as molecules) around the cell. It has two parts. The rough ER has the ribosomes to make the proteins. And the smooth ER makes lipids (fats) and works on detoxification, which means that it filters out the bad stuff.

The Golgi body is the packaging center that prepares molecules and other materials to be transported out of the cell.

The mitochondria is important because it takes in the sugars and oxygen in your body and converts it into energy for the cell to keep all of the organelles functioning. Some of this energy can be stored in the vacuoles, which are storage centers for all sorts of things, such as food or other nutrients, and even waste until it can be moved out.

And finally, we have the vacuoles, which are little storage units inside the cell. They can store nutrients or waste until the cell is ready to use or remove it. 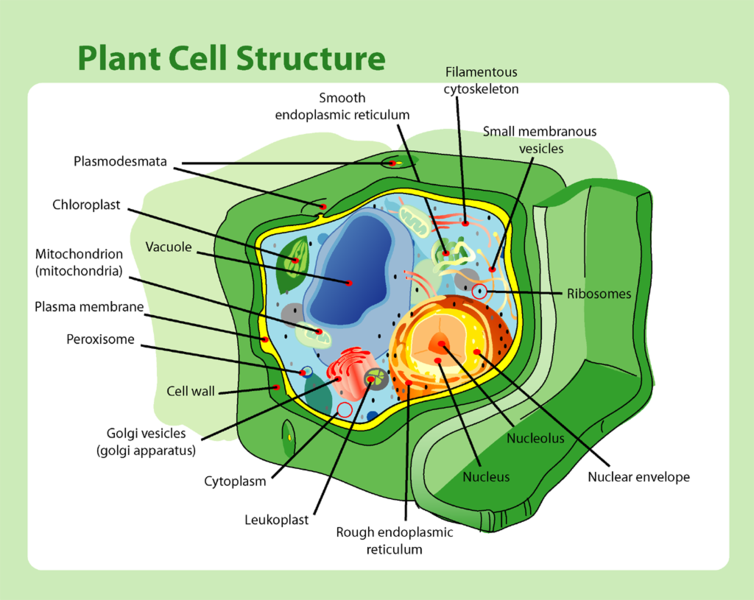 But there’s more! Plant cells have all of these organelles, but they also have the added bonus of chloroplasts. These organelles are scattered around the cell and they produce their own sugar – called glucose – by converting sunlight. This process is called photosynthesis.

Also, the vacuoles in plants are much bigger. In fact, it is called a central vacuole and it stores water for two reasons. The first is to provide moisture to the plant. And the second is to help support the plant in an upright position. This process is called turgor pressure. As the central vacuole fills with water, it pushes the other parts of the cell up against the cell wall making it rigid. This helps keep the plant upright instead of wilted.

And finally, plant cells have more of a rectangular shape thanks to their cell wall. It is found on the outside of the cell membrane. This boxy cell wall helps to both protect the cell and to provide structure as it works together with turgor pressure to support the plant.

Lesson activities for learning about cells

Here are some of our printable resources for helping your child remember the parts of a cell and their functions.

Art and science go hand-in-hand. In fact, many of the great scientists in history were also skilled artists. Why? Because part of being a scientist means you have to be able to describe what you see and learn. This is often best presented in a drawing, sketch, or model.

Gather some construction paper or poster board and some random supplies from your craft cabinet and kitchen. Have your kids build their own cell model using the items. Let them be creative! Good sources of materials include yarn, pasta, buttons, sequence, puff paint, (glitter) glue, felt, and so on.

The main parts of a cell have been listed and described above. But there are others and some perform multiple functions. Cells are fascinating and scientists continue to learn more and more about them.

Print our Parts of a Cell Trading Cards on cardstock and cut them out along the solid lines. Children can collect and trade them. Or you can take it to the next level and print two or three copies so that they can play card games such as Memory or Go Fish. 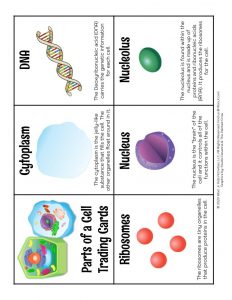 Parts of a Cell Lesson Worksheet 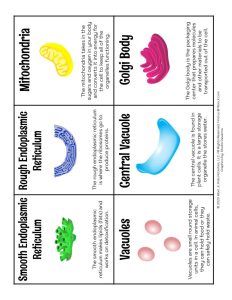 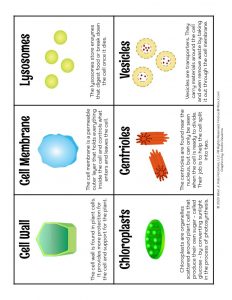 History of the Discovery of Cells

Cells weren’t discovered until around 400 years ago when Robert Hooke made the first microscope and discovered cells in 1663. But he didn’t really know what they were. Antonie van Leeuwenhoek developed a more powerful microscope a few years later when they discovered that cells were actually living things.

Matthias Schleiden and Theodor Schwann didn’t begin to develop the Modern Cell Theory until the 1830s though. A theory in science is an explanation of the natural world that has lots of evidence to support it. 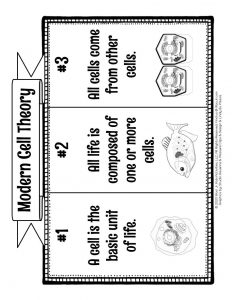 We’d love to hear how you use an introduction to cells lesson at home or in your classroom.