So, I have a couple of confessions to make.

2.  Some of my favorite projects start out as something else

When I originally started making this alphabet wall art, I was really just planning to work with my preschooler on four letters.  The idea was to do a “little project” that was educational.  I figured, why not make some glitter letters to put on our Christmas stocking so that Santa would know whose was whose?  It turns out, however, that four letters just doesn’t cause enough of a glitter explosion to satisfy an almost-three-year old.  At that point, it was “Why not?” and we went ahead and did the whole alphabet.

Of course, since I’m in the midst of decorating her room (yes, I’m making pretty much everything), it occurred to me that a glitter alphabet on the wall is pretty darn cool.

What you’ll need to make this alphabet wall art: 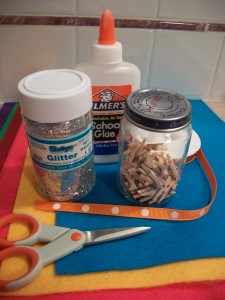 Cut felt into rectangles.  Mine are approximately 2 1/2 x 3 1/2″.  I didn’t make them uniform in size, but the are similar.  The lettering is varied a bit, too, so the end result is very nicely mis-matched. 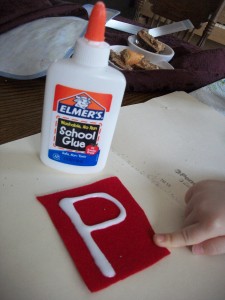 Use white glue to draw each letter onto your felt. 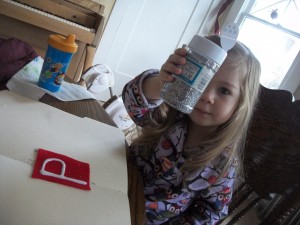 Try not to twitch as your child sprinkles glitter all over your dining room…I mean, the letters. 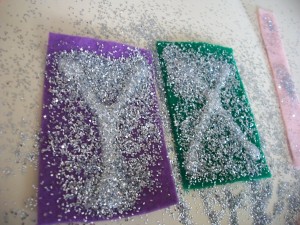 Sprinkle the letters liberally with glitter. 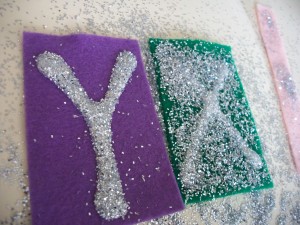 Shake off the excess glitter and put the letters aside to dry. 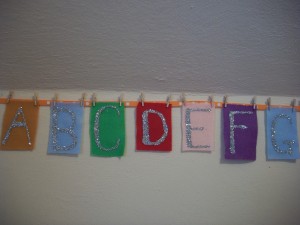 Hang the alphabet on a ribbon using miniature craft clothespins and then nail the ribbon to the wall. 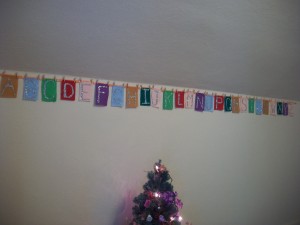 This alphabet art is a learning project that adds nice color to your child’s room.

What I Learned the Hard Way: I was literally on the letters X and Y when it occurred to me that I could have drawn a bunch with glue and then let Dot sprinkle five or ten all at once.  Instead, I spent a lot of extra time doing them one at a time.