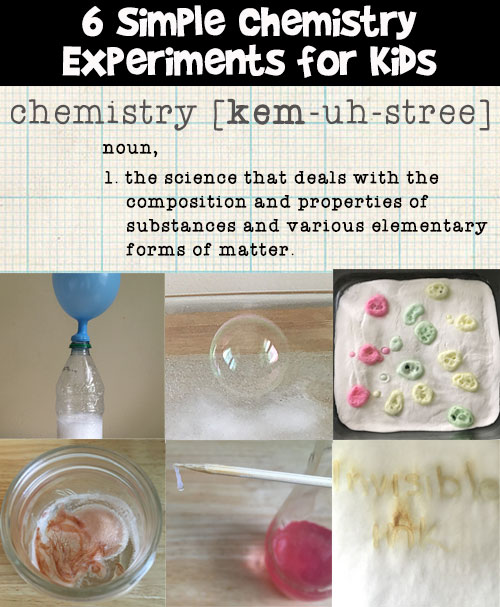 Chemistry is considered a central science, because it overlaps with physics, geology and biology – how cool is that? It studies the properties of matter, and how it is composed and can change under different circumstances. Here are six fascinating, fun and easy chemistry science projects for kids to explore safely at home or at school, with common household items that are easily obtained! We’ll be exploring acid based reactions, oxidation, making bubbles hover, dissolving eggshells, extracting DNA and even making some fun chemistry based art!

Related: Check out our 6 simple physics experiments for kids, too!

Blow Up a Balloon Using Science 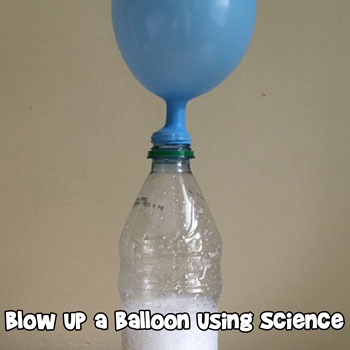 When acids and bases come together the reaction can range from mild to explosive. The strength of the reaction depends on several factors, including the concentration of the acid and base, and their chemical makeup. In order to take a closer look at what happens during an acid-base reaction, and how powerful these types of reactions can be, we will be mixing vinegar (an acid) with baking soda (a base). 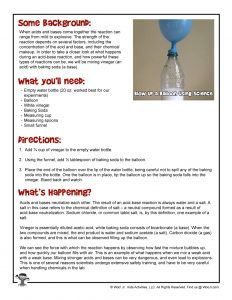 Acids and bases neutralize each other. The result of an acid-base reaction is always water and a salt. A salt in this case refers to the chemical definition of salt – a neutral compound formed as a result of acid-base neutralization. Sodium chloride, or common table salt, is, by this definition, one example of a salt.

Vinegar is essentially diluted acetic acid, while baking soda consists of bicarbonate (a base). When the two compounds are mixed, the end product is water and sodium acetate (a salt). Carbon dioxide (a gas) is also formed, and this is what can be observed filling up the balloon.

We can see the force with which the reaction happens by observing how fast the mixture bubbles up, and how quickly our balloon fills with air. This is an example of what happens when we mix a weak acid with a weak base. Mixing stronger acids and bases can be very dangerous, and even lead to explosions. This is one of several reasons scientists undergo extensive safety training, and have to be very careful when handling chemicals in the lab.

How to extract DNA 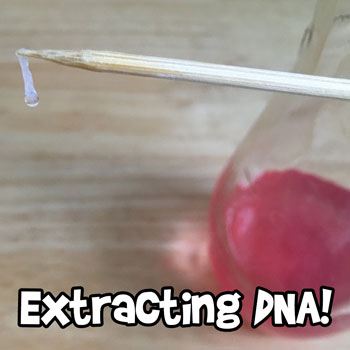 DNA is the genetic material in our cells. Everything from the color of our hair to the pattern of our fingerprints is coded for in our DNA. There’s so much DNA in a cell, it needs to be coiled up and tightly packed in order to make room for the rest of the structures the cell needs to maintain its daily functions. In this experiment, we’re going to unpack DNA, then bring it out of solution so we can look at it without the help of a microscope. 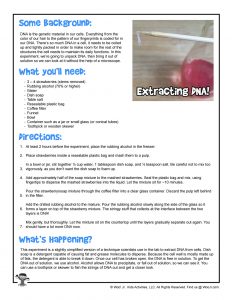 How to Extract DNA Printable Instructions

This experiment is a slightly simplified version of a technique scientists use in the lab to extract DNA from cells. Dish soap is a detergent capable of causing fat and grease molecules to disperse. Because the cell wall is mostly made up of fats, the detergent is able to break it down. Once our cell has broken open, the DNA is free in solution. To get the DNA out of solution, we use alcohol. Alcohol allows DNA to precipitate, or fall out of solution, so we can see it. You can use a toothpick or skewer to fish the strings of DNA out and get a closer look.

How to Make an Eggshell Disappear 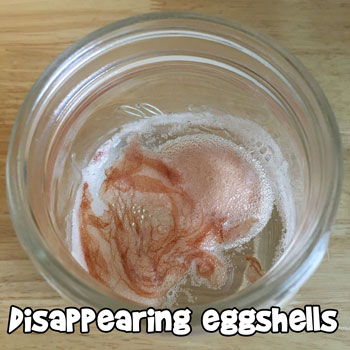 Most people think the outer shell is what keeps an egg intact. There’s more to the anatomy of an egg, however, and simply removing the shell won’t cause an egg to fall apart. In this experiment, we’ll make an eggshell disappear. We’ll see that even without the shell, an egg remains intact, albeit a lot more fragile than it started out. 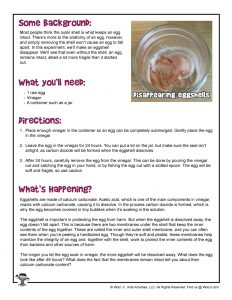 How to Make an Eggshell Disappear Printable Instructions

Eggshells are made of calcium carbonate. Acetic acid, which is one of the main components in vinegar, reacts with calcium carbonate, causing it to dissolve. In the process carbon dioxide is formed, which is why the egg becomes covered in tiny bubbles when it’s soaking in the solution.

The eggshell is important in protecting the egg from harm. But when the eggshell is dissolved away, the egg doesn’t fall apart. This is because there are two membranes under the shell that keep the inner contents of the egg together. These are called the inner and outer shell membrane, and you can often see them when you’re peeling a hardboiled egg. Though they’re soft and pliable, these membranes help maintain the integrity of an egg and, together with the shell, work to protect the inner contents of the egg from bacteria and other sources of harm.

The longer you let the egg soak in vinegar, the more eggshell will be dissolved away. What does the egg look like after 48 hours? What does the fact that the membranes remain intact tell you about their calcium carbonate content?

How to make hovering bubbles 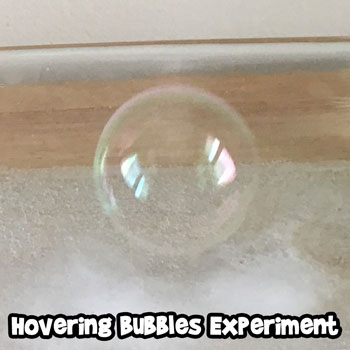 If you’ve ever blown soap bubbles then you know they don’t last very long. They hang in the air a moment, and then inevitably drift down to the ground and pop. In the following experiment, we’ll look at what makes bubbles float, and why they don’t linger indefinitely in the air. We’ll use a chemical reaction to generate gas that will keep our bubbles afloat, allowing us to observe the principles behind soap bubbles and the way they behave. 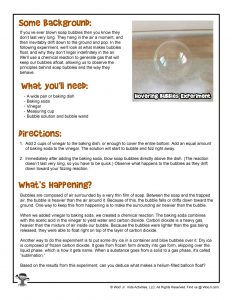 Bubbles are composed of air surrounded by a very thin film of soap. Between the soap and the trapped air, the bubble is heavier than the air around it. Because of this, the bubble falls or drifts down toward the ground. One way to keep this from happening is to make the surrounding air heavier than the bubble.

When we added vinegar to baking soda, we created a chemical reaction. The baking soda combines with the acetic acid in the vinegar to yield water and carbon dioxide. Carbon dioxide is a heavy gas, heavier than the mixture of air inside our bubble. Because the bubbles were lighter than the gas being released, they were able to float right on top of the layer of carbon dioxide.

Another way to do this experiment is to put some dry ice in a container and blow bubbles over it. Dry ice is composed of frozen carbon dioxide. It goes from frozen form directly into gas form, skipping over the liquid phase, which is how it gets name. When a substance goes from a solid to a gas phase, it’s called “sublimation.”

Based on the results from this experiment, can you deduce what makes a helium-filled balloon float? 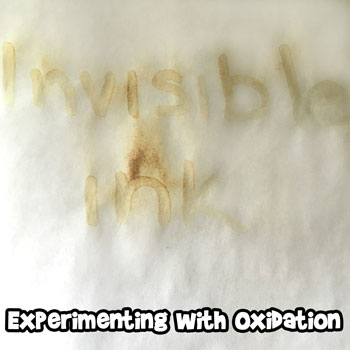 Have you ever sliced an apple for lunch, only to discover a few hours later that it’s turned brown? Have you ever had to clean rust off a bumper or a mailbox? Have you ever watched a bonfire burn? All of these processes occur thanks to a chemical reaction called oxidation.

Oxidation is a natural process that happens when certain substances come into contact with oxygen molecules found in the air. In the following experiment, we will take advantage of oxidation to write a message using invisible ink. 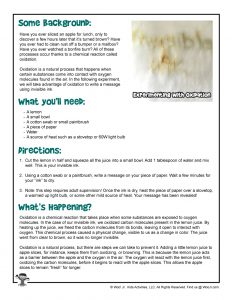 Oxidation is a chemical reaction that takes place when some substances are exposed to oxygen molecules. In the case of our invisible ink, we oxidized carbon molecules present in the lemon juice. By heating up the juice, we freed the carbon molecules from its bonds, leaving it open to interact with oxygen. This chemical process caused a physical change, visible to us as a change in color. The juice went from clear to brown, so it was no longer invisible. 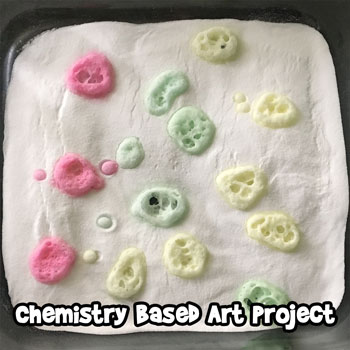 Chemical reactions happen all around us, many occurring naturally over time. The rusting of iron for instance, or the browning of an apple, are both examples of natural chemical reactions.

In this experiment, we’ll create our own chemical reaction, combining baking soda and vinegar to make a type of reaction called an acid-base reaction. Our reaction will allow us to see what happens when acids and bases combine. As a bonus, we’ll harness these changes to create our own unique work of art. 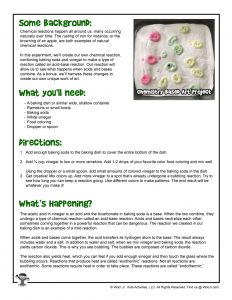 The acetic acid in vinegar is an acid and the bicarbonate in baking soda is a base. When the two combine, they undergo a type of chemical reaction called an acid-base reaction. Acids and bases neutralize each other, sometimes coming together in a powerful reaction that can be dangerous. The reaction we created in our baking dish is an example of a mild reaction.

When acids and bases come together, the acid transfers its hydrogen atom to the base. The result always includes water and a salt. In addition to water and salt, when we mix vinegar and baking soda, the reaction yields carbon dioxide. This is why you see bubbling. The bubbles are composed of carbon dioxide.

The reaction also yields heat, which you can feel if you add enough vinegar and then touch the glass where the bubbling occurs. Reactions that produce heat are called “exothermic” reactions. Not all reactions are exothermic. Some reactions require heat in order to take place. These reactions are called “endothermic.”