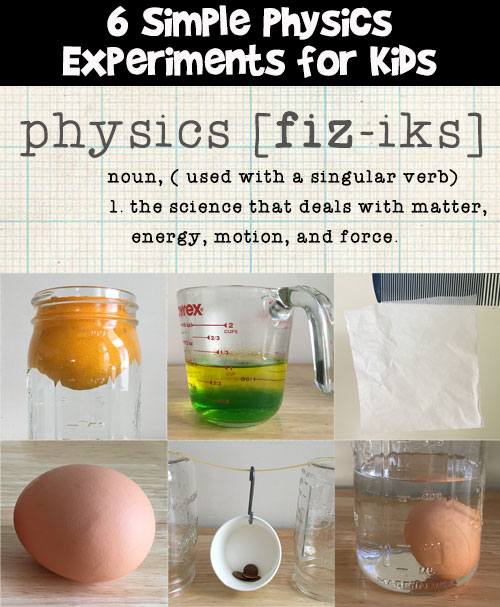 Physics is the natural science that deals with matter, energy, motion, and force. The goal of studying physics is to understand how our world, and by extension, how our universe works! Here are 6 super simple science experiments for kids to explore density, gravity, electricity, and pressure. You probably already have the materials you’ll need laying around the house: eggs, water, food coloring, oranges, a comb and even spaghetti!

Changing the Density of Water 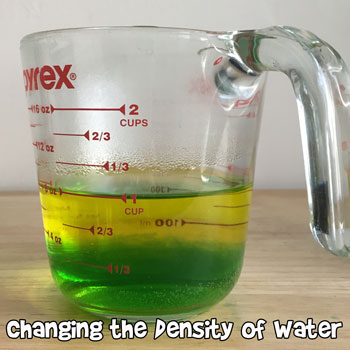 Have you ever seen a lake freeze in winter? When the temperature drops, a sheet of ice forms across the top, but underneath the ice layer, the lake is still there. Why does this happen, and why do you think it’s so important? We’ll tackle these questions in the following experiment. We’ll take a close look at the effects of temperature on water, and see what happens when you try to mix differently tempered water. 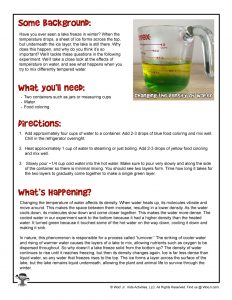 1. Add approximately four cups of water to a container. Add 2-3 drops of blue food coloring and mix well. Chill in the refrigerator overnight.

3. Slowly pour ~1/4 cup cold water into the hot water. Make sure to pour very slowly and along the side of the container so there is minimal mixing. You should see two layers form. Time how long it takes for the two layers to gradually come together to make a single green layer.

Changing the temperature of water affects its density. When water heats up, its molecules vibrate and move around. This makes the space between them increase, resulting in a lower density. As the water cools down, its molecules slow down and come closer together. This makes the water more dense. The cooled water in our experiment sank to the bottom because it had a higher density than the heated water. It turned green because it touched some of the hot water on the way down, cooling it down and making it sink.

In nature, this phenomenon is responsible for a process called “turnover.” The sinking of cooler water and rising of warmer water causes the layers of a lake to mix, allowing nutrients such as oxygen to be dispersed throughout. So why doesn’t a lake freeze solid from the bottom up? The density of water continues to rise until it reaches freezing, but then its density changes again. Ice is far less dense than liquid water, so any water that freezes rises to the top. The ice forms a layer across the surface of the lake, but the lake remains liquid underneath, allowing the plant and animal life to survive through the winter.

How to Make an Orange Sink or Swim 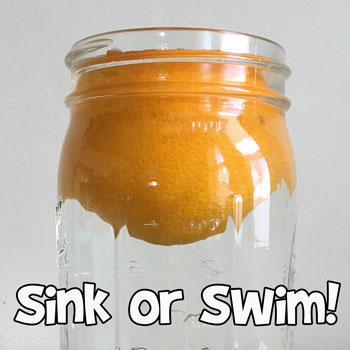 When trying to guess if an object will float, it’s useful to take into account the object’s density. Density is defined as mass per unit of volume, and objects with a higher mass-to-volume ratio have a higher density. Objects that are denser than water will sink, while those that are less dense will stay afloat.

Because it’s less dense than water, an unpeeled orange will float. It should stand to reason that peeling an orange, and thereby decreasing its mass, should have little or no effect. What happens, in fact, is the opposite. It may seem counterintuitive, but in the following experiment we’ll see that peeling an orange actually makes it sink. 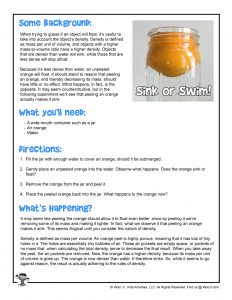 How to Make an Orange Sink or Swim Printable Instructions

1. Fill the jar with enough water to cover an orange, should it be submerged.

2. Gently place an unpeeled orange into the water. Observe what happens. Does the orange sink or float?

3. Remove the orange from the jar and peel it.

4. Place the peeled orange back into the jar. What happens to the orange now?

It may seem like peeling the orange should allow it to float even better, since by peeling it we’re removing some of its mass and making it lighter. In fact, what we observe it that peeling an orange makes it sink. This seems illogical until you consider the nature of density.

Density is defined as mass per volume. An orange peel is highly porous, meaning that it has lots of tiny holes in it. The holes are essentially tiny bubbles of air. These air pockets are empty space, or pockets of no mass that, when calculating the total density, serve to decrease the final result. When you take away the peel, the air pockets are removed. Now, the orange has a higher density, because its mass per unit of volume is goes up. The orange is now denser than water. It therefore sinks. So, while it seems to go against reason, the result is actually adhering to the rules of density.

How to Use Gravity to Tell if an Egg is Cooked 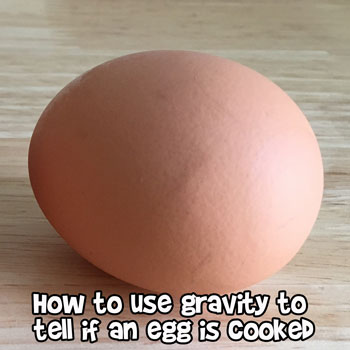 “Gravity” is the force that draws us toward the earth, and it’s responsible for making things fall to the ground when they’re thrown up, or dropped from a distance. The “center of gravity”, or the “center of mass”, is the point at which an object’s weight is concentrated. It can be considered as the point on which gravity acts on an object.

Having a stable center of gravity makes things like spinning tops possible, or for a tightrope walker to balance on a thin wire. We can also take advantage of this phenomenon to determine if an egg is cooked, without having to crack the egg open! 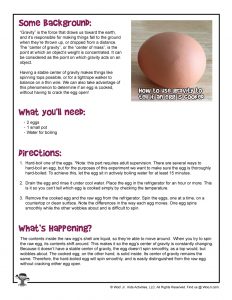 1. Hard-boil one of the eggs. *Note: this part requires adult supervision. There are several ways to hard-boil an egg, but for the purposes of this experiment we want to make sure the egg is thoroughly hard-boiled. To achieve this, let the egg sit in actively boiling water for at least 15 minutes.

2. Drain the egg and rinse it under cool water. Place the egg in the refrigerator for an hour or more. This is it so you can’t tell which egg is cooked simply by checking the temperature.

3. Remove the cooked egg and the raw egg from the refrigerator. Spin the eggs, one at a time, on a countertop or clean surface. Note the differences in the way each egg moves. One egg spins smoothly while the other wobbles about and is difficult to spin. 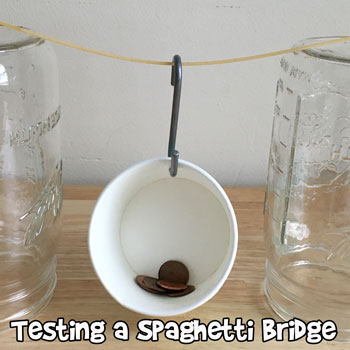 One of the key decisions in construction is the selection of building materials. Depending on their composition, different materials are capable of withstanding different loads. We can examine this concept by constructing a miniature bridge, and then testing its ability to support weight. We’ll use strands of uncooked spaghetti to look at how the structural makeup of a particular building material affects its ability to withstand pressure. 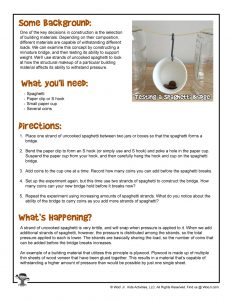 1. Place one strand of uncooked spaghetti between two jars or boxes so that the spaghetti forms a bridge.

2. Bend the paper clip to form an S hook (or simply use and S hook) and poke a hole in the paper cup. Suspend the paper cup from your hook, and then carefully hang the hook and cup on the spaghetti bridge.

3. Add coins to the cup one at a time. Record how many coins you can add before the spaghetti breaks.

4. Set up the experiment again, but this time use two strands of spaghetti to construct the bridge. How many coins can your new bridge hold before it breaks now?

5. Repeat the experiment using increasing amounts of spaghetti strands. What do you notice about the ability of the bridge to carry coins as you add more strands of spaghetti?

A strand of uncooked spaghetti is very brittle, and will snap when pressure is applied to it. When we add additional strands of spaghetti, however, the pressure is distributed among the strands, so the total pressure applied to each is lower. The strands are basically sharing the load, so the number of coins that can be added before the bridge breaks increases.

An example of a building material that utilizes this principle is plywood. Plywood is made up of multiple thin sheets of wood veneer that have been glued together. This results in a material that’s capable of withstanding a higher amount of pressure than would be possible by just one single sheet.

How to Make a Comb “Magnet” 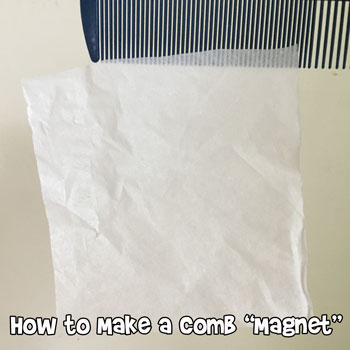 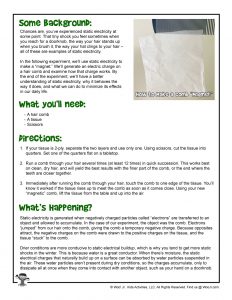 How to Make a Comb “Magnet” Printable Instructions

1. If your tissue is 2-ply, separate the two layers and use only one. Using scissors, cut the tissue into quarters. Set one of the quarters flat on a tabletop.

2. Run a comb through your hair several times (at least 12 times) in quick succession. This works best on clean, dry hair, and will yield the best results with the finer part of the comb, or the end where the teeth are closer together.

3. Immediately after running the comb through your hair, touch the comb to one edge of the tissue. You’ll know it worked if the tissue rises up to meet the comb as soon as it comes close. Using your new “magnetic” comb, lift the tissue from the table and up into the air.

Static electricity is generated when negatively charged particles called “electrons” are transferred to an object and allowed to accumulate. In the case of our experiment, the object was the comb. Electrons “jumped” from our hair onto the comb, giving the comb a temporary negative charge. Because opposites attract, the negative charges on the comb were drawn to the positive charges on the tissue, and the tissue “stuck” to the comb.

Drier conditions are more conducive to static electrical buildup, which is why you tend to get more static shocks in the winter. This is because water is a great conductor. When there’s moisture, the static electrical charges that naturally build up on a surface can be absorbed by water particles suspended in the air. These water particles aren’t present during dry conditions, so the charges accumulate, only to dissipate all at once when they come into contact with another object, such as your hand on a doorknob.

Make an Egg Float in Water 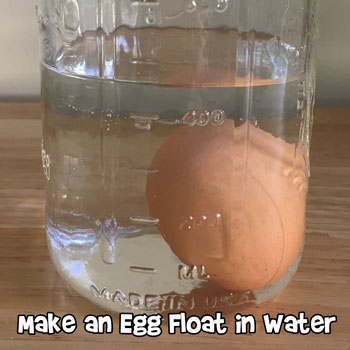 Not everything floats in water. An egg, for instance, will sink to the bottom when placed in a container full of water. A ping-pong ball, on the other hand, will float. Why does this happen? What makes something float or sink? The answer is density. Objects that are denser than water will sink. Those that are less dense will float.

The following experiment will allow you to observe the effect of density in action. By changing the density of water, we can change an egg’s ability to float. 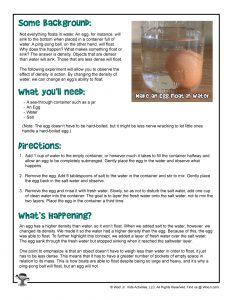 1. Add 1 cup of water to the empty container, or however much it takes to fill the container halfway and allow an egg to be completely submerged. Gently place the egg in the water and observe what happens.

2. Remove the egg. Add 6 tablespoons of salt to the water in the container and stir to mix. Gently place the egg back in the salt water and observe.

An egg has a higher density than water, so it won’t float. When we added salt to the water, however, we changed its density. We made it so the water had a higher density than the egg. Because of this, the egg was able to float. To further highlight this concept, we added a layer of fresh water over the salt water. The egg sank through the fresh water but stopped sinking when it reached the saltwater layer.

One point to emphasize is that an object doesn’t have to weigh less than water in order to float, it just has to be less dense. This means that it has to have a greater number of pockets of empty space in relation to its mass. This is how boats are able to float despite being so large and heavy, and it’s why a ping-pong ball will float, but an egg will not.