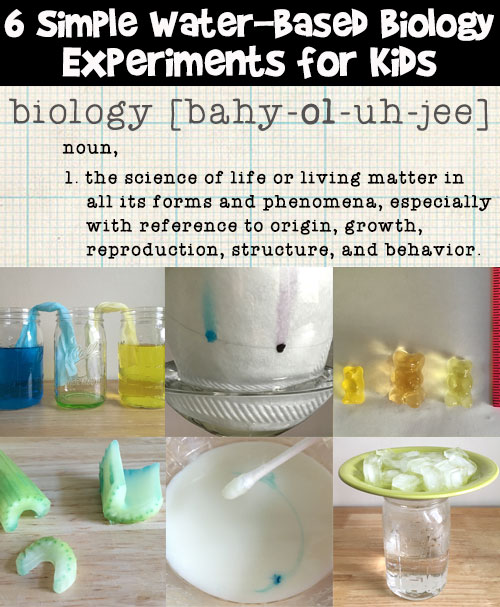 Let’s dive into studying life and living organisms with a new set of biology experiments for kids! These are all easy and simple to do at home or in your classroom, and all of them are liquid or water-based, so you’ll likely have everything you need on hand to bring these science projects to life. We’ll be exploring osmosis, chromatography, homogenization, transpiration, capillary action, and evaporation.

Related: Check out our other science experiments for kids posts on physics and chemistry! 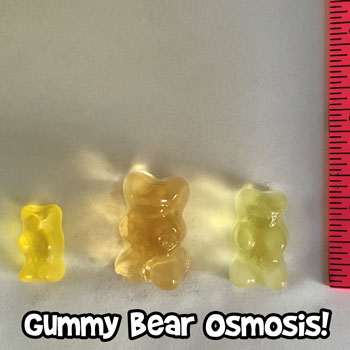 “Solute” is a general term that refers to a molecule dissolved in a solution. In a salt water solution, for example, the salt molecules are the solutes. The more salt we put in the solution, the more we increase the concentration of solutes.

Water moves from an area with a lower concentration of solutes to an area with a higher solute concentration. This movement of water molecules is called “osmosis.” In order to examine the process of osmosis and observe how it works, we can look at what happens to gummy bears when they are left to soak in different solutions overnight. 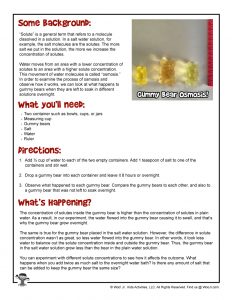 You can experiment with different solute concentrations to see how it affects the outcome. What happens when you add twice as much salt to the overnight water bath? Is there any amount of salt that can be added to keep the gummy bear the same size? 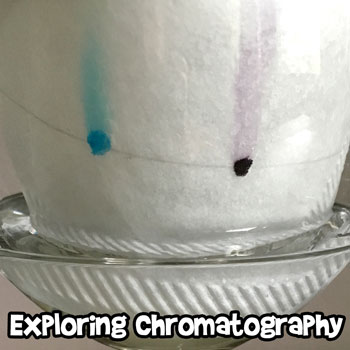 Chromatography is a technique used to separate out the components of a mixture. The technique utilizes two phases – a mobile phase and a stationary phase. There are several types of chromatography, but in this experiment, we will be looking at paper chromatography. 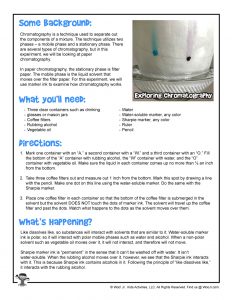 Like dissolves like, so substances will interact with solvents that are similar to it. Water-soluble marker ink is polar, so it will interact with polar mobile phases such as water and alcohol. When a non-polar solvent such as vegetable oil moves over it, it will not interact, and therefore will not move. 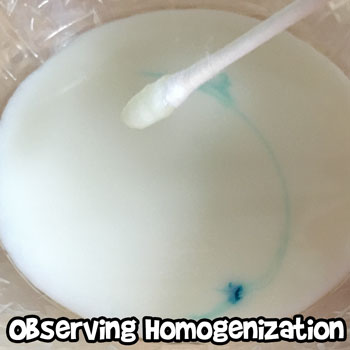 Molecules in a solution tend to aggregate with other molecules that are similarly charged. Fat molecules, for instance, will cluster together with other fat molecules. Milk is made up of different types of molecules, including fat, water, and protein. In order to keep these molecules from completely separating to form layers, milk undergoes a process called homogenization.

Even after undergoing homogenization, however, fat molecules floating free in solution will come together when milk is left sitting undisturbed. To visualize this process, and what happens when those molecules are dispersed, we can use food coloring and dish soap. 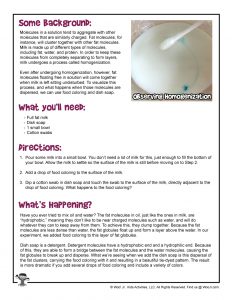 Have you ever tried to mix oil and water? The fat molecules in oil, just like the ones in milk, are “hydrophobic,” meaning they don’t like to be near charged molecules such as water, and will do whatever they can to keep away from them. To achieve this, they clump together. Because the fat molecules are less dense than water, the fat globules float up and form a layer above the water. In our experiment, we added food coloring to this layer of fat globules.

Dish soap is a detergent. Detergent molecules have a hydrophobic end and a hydrophilic end. Because of this, they are able to form a bridge between the fat molecules and the water molecules, causing the fat globules to break up and disperse. What we’re seeing when we add the dish soap is this dispersal of the fat clusters, carrying the food coloring with it and resulting in a beautiful tie-dyed pattern. The result is more dramatic if you add several drops of food coloring and include a variety of colors. 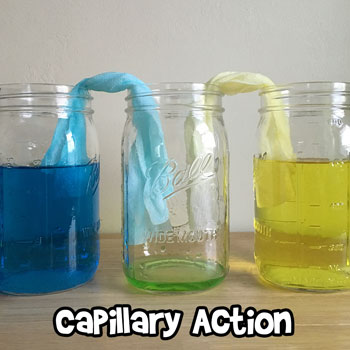 Paper towels are designed to pick up spills quickly, absorbing lots of liquid with only a few sheets. But what is it about paper towels that makes them so absorbent? The answer is, in part, capillary action. 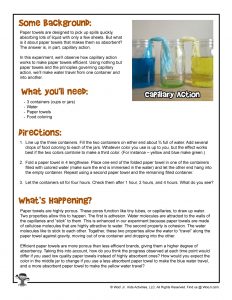 Paper towels are highly porous. These pores function like tiny tubes, or capillaries, to draw up water. Two properties allow this to happen. The first is adhesion. Water molecules are attracted to the walls of the capillaries and “stick” to them. This is enhanced in our experiment because paper towels are made of cellulose molecules that are highly attractive to water. The second property is cohesion. The water molecules like to stick to each other. Together, these two properties allow the water to “travel” along the paper towel against gravity, moving out of one container and dropping into the other. 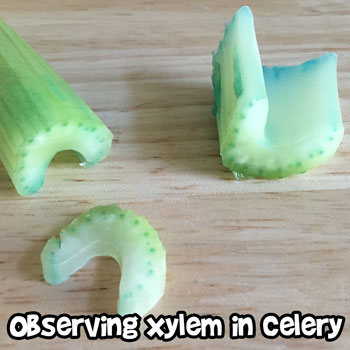 All plants need water to survive. In order to move water up from the soil and into their shoots and leaves, plants have developed a system of water transport. This system is called “xylem.” We can observe the movement of water through xylem transport by placing stalks of celery in colored water. The colored water moves through the stalk and up into the leaves, making the path of the water through this system visible. 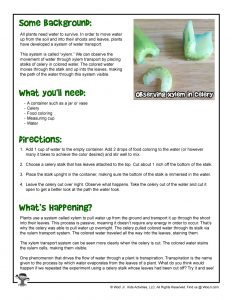 Plants use a system called xylem to pull water up from the ground and transport it up through the shoot into their leaves. This process is passive, meaning it doesn’t require any energy in order to occur. That’s why the celery was able to pull water up overnight. The celery pulled colored water through its stalk via the xylem transport system. The colored water traveled all the way into the leaves, staining them.

The xylem transport system can be seen more clearly when the celery is cut. The colored water stains the xylem cells, making them visible.

One phenomenon that drives the flow of water through a plant is transpiration. Transpiration is the name given to the process by which water evaporates from the leaves of a plant. What do you think would happen if we repeated the experiment using a celery stalk whose leaves had been cut off? Try it and see!

How to Make it Rain Indoors

One of the properties of water is that it can exist in different phases. It can exist as a liquid, which is the form we’re most familiar with, and it can also exist as a solid (ice), or gas (water vapor). In this experiment, we’ll take water through two of its phases – liquid and gas. We’ll observe how temperature causes water to move from one phase into another. This will allow us to get a better idea of what happens to water in nature, and the role temperature plays in the water cycle. 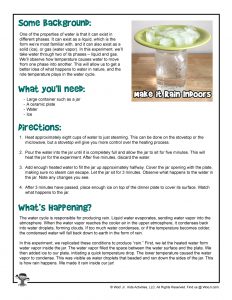 How to Make it Rain Indoors Printable Instructions

The water cycle is responsible for producing rain. Liquid water evaporates, sending water vapor into the atmosphere. When the water vapor reaches the cooler air in the upper atmosphere, it condenses back into water droplets, forming clouds. If too much water condenses, or if the temperature becomes colder, the condensed water will fall back down to earth in the form of rain.

In this experiment, we replicated these conditions to produce “rain.” First, we let the heated water form water vapor inside the jar. The water vapor filled the space between the water surface and the plate. We then added ice to our plate, initiating a quick temperature drop. The lower temperature caused the water vapor to condense. This was visible as water droplets that beaded and ran down the sides of the jar. This is how rain happens. We made it rain inside our jar!